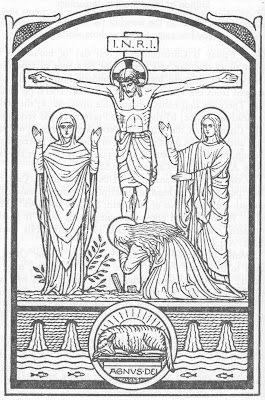 The tree of life in the center of Eden, watered by the four rivers (Genesis 2:9-10) was already a symbol of the Messiah's saving action. It was an image of God's wisdom. In the Book of Revelation the writer envisions another tree of life growing in the heavenly Jerusalem, to which those who "have washed their robes and made them white in the blood of the Lamb" have access. But, as a 3rd century Christian poem notes, there is another tree of life upon which humankind's fate was decided -- the Cross:

There is a spot that we believe the whole world's midpoint:
The Jews in their mother tongue call it Golgotha.
The liturgical essentials of Good Friday are summarized in the picture above, corresponding to the four parts of the Liturgy of Good Friday: 1) The Readings, including the reading of the Passion according to John; 2) The Solemn Collects for the Church and for all sorts and conditions of human beings; 3) The three-fold Veneration of the Cross; and 4) Holy Communion. In the picture Mary, Theotokos, the God-Bearer, offers petitions in the Orante position. John the Beloved, standing beneath the Cross at the Passion, gestures toward the suffering Christ. Bereft with sorrow, Mary Magdalen, lovingly venerates Jesus on the Cross by kissing his feet. The Lamb of God, "the Lamb who was slain",  is the sacrificial Eucharistic offering for those from "every tribe and language and people and nation". Behind the Lamb is the rising sun, a symbol as the ancient 1st Lesson of Good Friday says, that "on the third day He will enliven us". Below the Cross flow the four rivers of Genesis, ancient symbols of the saving waters flowing from the Tree of Life. According to Tertullian, in his treatise On Baptism, "...But we, being little fishes, as Jesus Christ is our great Fish, begin our life in the water..."


"Immortal tree, it extends from heaven to earth. It is the fixed pivot of the universe, the fulcrum of all things, the foundation of the world, the cardinal point of the cosmos. It binds together all the multiplicity of human nature. It is held together by invisible nails of the spirit in order to retain its bond with the Godhead. It touches the highest summits of heaven and with its feet holds fast the earth, and it encompasses the vast middle atmosphere in between with its immeasurable arms." (Pseudo Chrysostom, 3rd century)
Posted by Harry Allagree at 10:44 AM