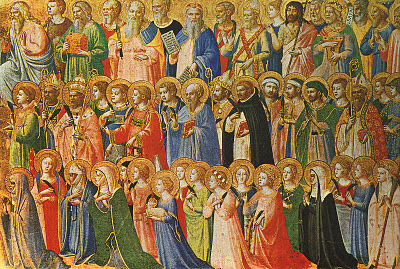 The Communion of Saints has been on my mind quite a bit lately. Along with the people, and especially the clergy, of our Diocese of Northern California, I'm lamenting the untimely death of a unique woman, priest, colleague and friend: The Rev. Marcia Engblom. Marcia had been serving as Rector of St. Francis, Fair Oaks, CA, the first parish of which my family and I were members when we first came to the Sacramento area in 1977. Before that, Marcia was the interim priest at St. Luke's, Auburn. When I asked her how she would handle the "What to call a female priest" question there, she said that she felt comfortable with just about any appropriate designation, but that she'd make it known that parishioners could simply call her "Father Marcia", if that would be easier for them. And, indeed, she even signed her name thus in the monthly newsletter! Aside from her great openness and playful spirit, her laughter could win over the hardest heart. She and I, and, I'm sure others, delighted in comments playing off of one another and the repartee which so lifted one's spirit in her presence.
In early September Marcia underwent serious cardiac surgery to which, as I understand it, she was no stranger, having had previous treatment. I called her a few weeks ago and, though the extent of the surgery and recovery had understandably taken a little of the starch out of her, nevertheless she spoke quite positively, and was itching to get back to being a pastor to her people. And, once again, we laughed and joked! Her life, and ours, suddenly changed this past Friday as she stood in her tile-floored kitchen. Her heart experienced what was called a "hiccup", and Marcia collapsed, striking her head and suffering a skull concussion from which she never recovered.
As I prayed the Office for All Saints Day, I couldn't help being just a bit envious of Marcia, knowing that now she is part of that vast throng who have gone before us into Christ's Risen Presence. "Happy are those who honor the Lord, who adore God's commandments!...They shine in the dark for others who do right...Yes, these sorts of people will never be shaken; the righteous will be remembered forever!...Their hearts are steady, trusting in the Lord. Their hearts are firm; they aren't afraid...They freely give to those in need. Their righteousness stands forever. Their strength increases gloriously..."
It's natural, I think, to wonder how all this works, once you've passed over from human life in the Communion of Saints, into unending life in the Communion of Saints beyond. I feel sure that, whatever it is, the new life is anything but boring! I like to think that we retain, in infinite degree, all the good characteristics and qualities which make us "us". The Book of Revelation, in the reading for Evening Prayer today, depicts a voice saying: "See, the home of God is among mortals. God will dwell with them as their God; they will be his peoples, and Godself will be with them; God will wipe every tear from their eyes. Death will be no more; mourning and crying and pain will be no more...God's servants will worship; they will see God's face, and God's name will be on their foreheads..." Inadequate, halting human words and images, trying to imagine a reality which can only be known by experiencing it. My conviction is that Marcia isn't only experiencing it, but is knee-deep in enthusiastic, all-out participation in the heavenly festivities, whatever they may be. I can imagine her lilting laughter ringing out loud and clear over prophets, apostles, martyrs, and angels.
By now I'm sure Marcia has met and compared notes with Steve Jobs who made the final journey just three weeks before she did. Steve's sister, Mona Simpson, wrote a touching tribute to her brother, and as I give thanks once again for being part of this unutterable holy fellowship of God's holy ones, which spans absolutely all barriers and, I believe, is supremely all-inclusive, I think of the closing lines of her eulogy: "Before embarking, he’d looked at his sister Patty, then for a long time at his children, then at his life’s partner, Laurene, and then over their shoulders past them.
Steve’s final words were: OH WOW. OH WOW. OH WOW."
Posted by Harry Allagree at 9:23 PM

You got it right. I can imagine Father Marcia saying " Oh wow, oh Wow, oh Wow". She was quirky and funny but she was also very completely orthodox in her theology, which I appreciated. It would have been easy for her to have been led astray by the adulation of admirers. She kept on the straight path.