Praying For A Pope 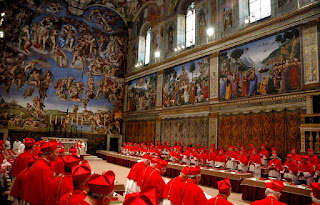 It's around 6:15 AM in Rome about now, and I'm sitting here praying for a new Pope. Why in the world should a former Roman Catholic priest, a convert to the Episcopal Church, and now retired after 30 years of service as an Episcopal priest be doing such a thing?! Well, for one, old habits die hard! I was formed by the Roman Catholic tradition for some 40 years, and still have many contacts and close friends who are Catholic. I frankly revere much, certainly not all, in the tradition, theology, and spiritual practice in which I was brought up and trained.

Aside from that, my understanding of the Church is akin to the image of a huge house, a residence, a family home in which there are many rooms. Each room has its own character, design, furnishings, etc. according to the one(s) who reside(s) there. No one in the family necessarily likes or prefers what the others have or how they keep it up, but in a good family, at least, everyone has learned to respect and tolerate and live amicably with the differences. And even to honor the decision of some of the family members to move permanently to a different room! In many cases, there's commonality; in others, there's wide divergence. Yet all are, as the Church, part of the "one, holy, catholic [= universal], apostolic" family, the Body of Jesus the Christ. In such a dwelling, why would we not all be aware of, interested, concerned, and prayerful about the goings-on of our sisters and brothers?

Since Pope Benedict XVI's abdication, I've spent a couple weeks reading about the challenges which the Roman Catholic Church faces at this point in history. The books by Jason Berry and John Thavis which I've perused don't paint a pretty picture. In fact, I guess I'd have to say that what I've read is much worse than I'd presumed. There's a lot going on that's grossly inefficient, unaccountable, morally sinful and evil, and probably illegal. Nevertheless, this is a critical moment in the history of the Church generally and of the world, because a whole lot of lives will be impacted by the ultimate decision this week of the 115 cardinals gathered in the Sistine Chapel. Whether we realize it or not, all of us are touched, directly or indirectly, by the decisions which our brothers and sisters in Christ make. Jesus made it clear that making the reign of God real among, building the Body of Christ through the use of our combined spiritual gifts and talents, is our work, our task. At the very least, it behooves each of us to pray for one another on an ongoing basis to offer our best efforts to the common endeavor.

I have no clue, or even a viable hunch, as to who the cardinals will choose as the next Pope. I do, however, pray for the cardinals to really welcome the wisdom of the Holy Spirit in guiding them to make a choice based on honesty, selflessness, and a deep sense of wanting the very best spiritually for the people of the the Roman Catholic Church. For the cardinal who's destined to become the next Holy Father, I pray that he'll have the humility to accept this ministry as Jesus would and did: to be in word and action the "servant of the servants of God", a title given to popes. I pray that he'll have the courage, the boldness, the determination to be, not a functionary, but a true pastor to his people and, indeed, to all the world. I pray that he'll be given grace from God, the implications of which he can't even remotely imagine at present: "amazing grace" which will surprise not only the Church and the world, but even himself. And I pray that he'll be given the wherewithal to challenge the Church to operate beyond "business as usual", to move forward with a vision of what the people of God can be, realistically, in creatively addressing the immense social, political, moral and spiritual challenges of the 21st century.

The difficult thing, to my mind, is the fairly monochrome character of the Cardinals—virtually all appointed by John Paul II or Benedict XVI—and that doesn't bode well for reform.

Even the most liberal of them is still far to the right of the plebs Dei—"the people of God"— who, according to Vatican II, actually ARE the Church.

I had some hope at one point that they might revert to ancient tradition and elect someone who was not a Cardinal….

But, on the other hand, God is not mocked—and the memory of John XXIII and his totally unexpected revolution reminds me that we can never out-guess God!

Let us all pray for those in conclave….

I, too, am praying for a new pope. The Roman Catholic Church is huge and has a lot of impact. The Vatican II reforms influenced more than just Catholics. I hope and pray the Holy Spirit really shouts out loud this time.