The Little Man Who Got Found 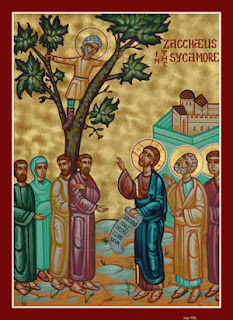 Zacchaeus, in Greek = Zakchaios, from the Hebrew meaning pure, was, Luke tells us (19:1-10), a superintendent of customs, a chief tax-gatherer = publicanus, at Jericho. Tax collectors were hated by many of their fellow Jews, both because of dishonesty in their profession and because they were seen as collaborators with the Roman Empire. Since Jericho was the center for a lucrative production and export of balsam, Zacchaeus' position would have made him both important and rich, which Luke also mentions.
A popular children's song captures the main gist of Luke's story:
“Zacchaeus was a wee little man,
And a wee little man was he.
He climbed up in a sycamore tree,
For the Lord he wanted to see.
And as the Savior passed that way
He looked up in that tree
And He said, “Zacchaeus, you come down!
For I’m going to your house today,


For I’m going to your house to stay.”

Notice that Luke's account begins by purposefully telling us the "Jesus entered Jericho and was passing through it..." Jesus' ultimate destination, as Luke emphasizes all through the Gospel, is Jerusalem where, as we know, he’ll die at the hands of the Roman occupiers, egged on by Jewish religious leaders.
Luke describes Zacchaeus as "short in stature", short enough, apparently, that, along with his well-known professional position and wealth, it was a problem. In addition to that, for Zacchaeus to try to mingle in the crowd, even if it was up front where he could see, was fraught with danger. Predictably, you can guess that he would have had some enemies...on several counts. It wasn't unusual in his time for assassinations to be furtively carried out by sticking a knife into someone in the midst of a crowd. There were, in fact, people known as Sicarii, from the Latin word sicarius = dagger-man, or assassin, Jews whose intent was to use a concealed dagger or sica to eliminate Romans from Judea in this way. Luke says that Zacchaeus "ran ahead and climbed a sycamore tree", which, by the way, bears no resemblance to the American sycamore. It was, instead, a variety of fig tree. "Trying to see Jesus", Zacchaeus hovers there, camouflaged by the leaves.
When Jesus reaches the spot, he stops and looks up into the branches, addressing Zacchaeus by name. Imagine what that must've felt like to a man accustomed to the usual scorn and derision, or worse, by his fellow-citizens. "Hurry and come down, for I must stay at your house today." Before Zacchaeus can think of anything to say, the onlooking crowd is utterly shocked! "What?!... he's going to be the guest of a sinner!!", they grumble. Luke uses the Greek equivalent of the Hebrew word used in Exodus when the people obstinately complain; grumble; murmur against God and Moses.
In contrast to the crowd, Zacchaeus "hurried down and was happy to welcome [Jesus]".  Zacchaeus then announces: “Look, Lord! half of my possessions I’ll give to the poor, and if I have defrauded anyone of anything, I’ll pay back four times as much.” This resonates with Exodus 22:1-15, which spells out the restitution required when one is responsible for the loss of another's property. Restitution ranges from straight replacement for negligence, increasing up to two, four or five times replacement for various thefts. Exodus 22:1 says, "When someone steals an ox or a sheep, and slaughters or sells it, the thief shall pay...four sheep for a sheep...The thief shall make restitution..." King David also applied this rule in 2 Samuel 12:6 when he said, "And he shall restore fourfold for the lamb, because he did this thing, and because he had no pity."
Zacchaeus chooses a generous recompense. He places himself on the guilty side of the spectrum outlined in Exodus, and intends to begin anew in complete obedience to God.
Seen by Jesus, personally named by Jesus, accepted unconditionally for who he is by Jesus, Zacchaeus himself is touched by divine grace. "Today salvation has come to this house", says Jesus, "because he too is a son of Abraham..." The one who was lost. The one whom Jesus came to seek out. This one has been recognized, acknowledged, found.
According to Clement of Alexandria, in his Stromata, Zacchaeus was surnamed Matthias by the apostles, and took the place of Judas Iscariot after Jesus's ascension. The later Apostolic Constitutions identify "Zacchaeus the Publican" as the first bishop of Caesarea.
In the Eastern Orthodox and Greek-Catholic Churches, the Gospel account of Zacchaeus is read on the last Sunday preceding the liturgical preparation for Great Lent, and thus is known as "Zacchaeus Sunday." It was chosen to open the Lenten season in order to highlight two things: God's calling us to humility, represented in Jesus' call to Zacchaeus to come down from the tree; and God's calling us to repentance, exemplified by Zacchaeus' actions.
Many see the story of Zacchaeus as illustrating Jesus' words: "Blessed are the pure of heart, For they shall see God" (Matthew 5:8). Zacchaeus whose name means pure, climbed up a tree, similar to the cross, and was symbolically crucified with Christ, enabling him to see God in Jesus.
The verses of an old hymn gives you and me something to reflect on and to pray about this week:
I sought the Lord, and afterward I knew /
he moved my soul to seek him, seeking me. /
It was not I that found, O Savior true; /
no, I was found of thee.

Posted by Harry Allagree at 8:33 PM

I always remember my New Testament professor saying that such unessential details (as Zacchaeus's height or the pillow Jesus slept on in the boat or the fact that the apostle–presumably John–was "known to the high priest's household") are strong evidences of the historicity of those passages—obviously described by eye-witnesses who were careful to include every detail they could recall.