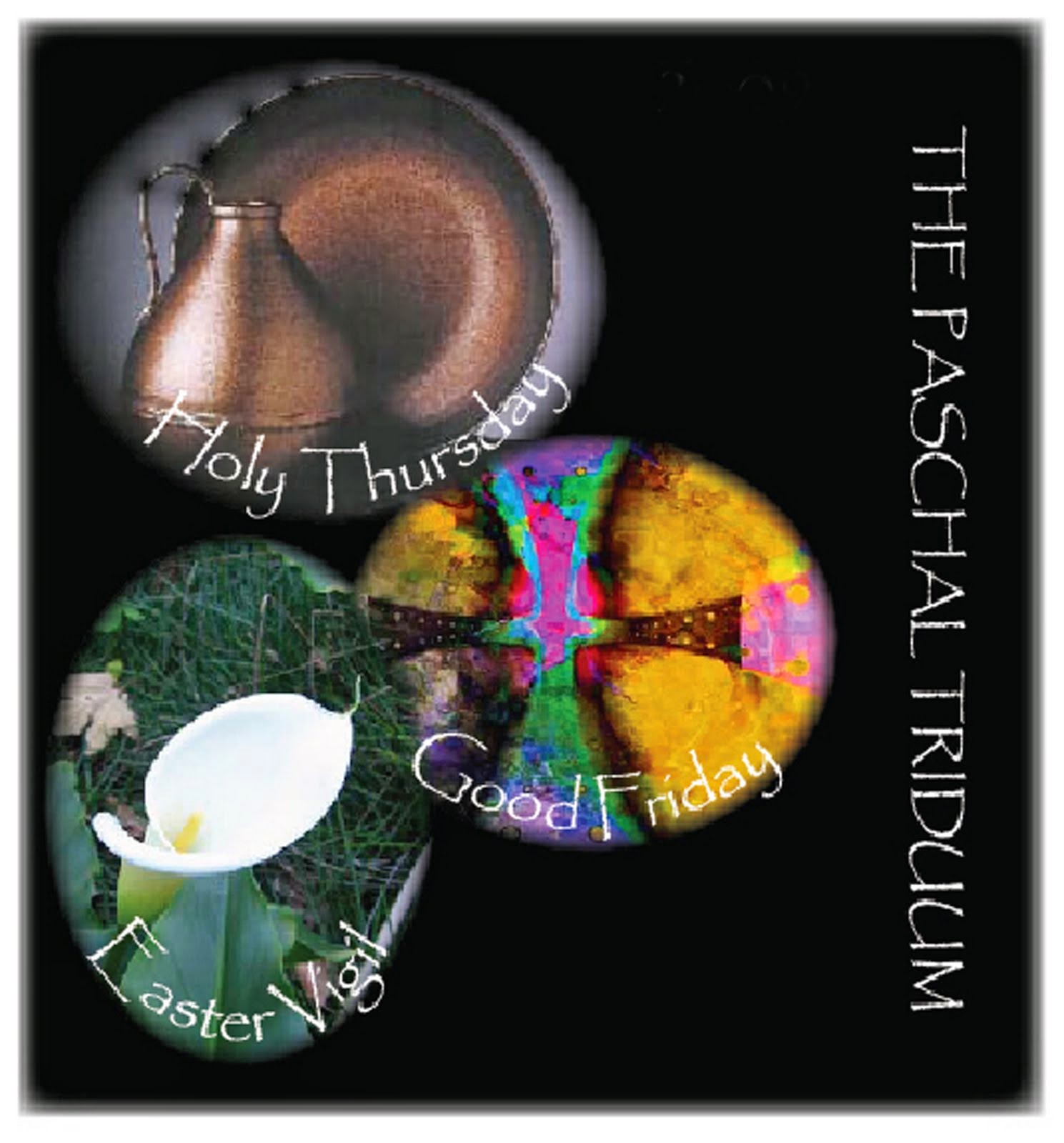 The Paschal Triduum (Latin, three days) begins with Maundy Thursday, celebrated from the 4th century on, since Good Friday was reckoned from sunset on the previous evening. The ancient traditional name of this day is "Thursday of the Lord's Supper", commemorating the historical gospel events surrounding the Last Supper and the institution of the Holy Eucharist. The title, "Maundy" Thursday, is a corruption of the Latin, mandatum = commandment. The service includes a reenactment of the solemn ritual of washing of feet in imitation of Jesus who washed his disciples' feet at the Last Supper, and from his words, "A new commandment I give you…": signs of his humility and service to others. Anyone can have their feet washed, though participants are usually chosen from the parish at large, or from those in parish leadership roles. Some parishes intentionally include the very poor or "rejected" citizens to send a more vivid message.

At the end of the Maundy Thursday liturgy, consecrated bread and wine are carried in procession to an altar of reservation, to be used in Good Friday's Communion liturgy. An atmosphere of quiet waiting with the Lord begins, with some places keeping vigil through the night hours.

A sign of anticipation of Christ's suffering and death on Good Friday is evidenced in the complete stripping of the altar and the sanctuary of all liturgical appointments & linens by the celebrant and others.

This is the anniversary of the death of Jesus on a cross, outside the walls of the Holy City, Jerusalem. This moment finds its completion on the following day as the Holy Saturday night hours change into the Sunday of the Resurrection, Easter Sunday. The origin of the term "Good" is unknown, but probably emphasizes the saving value of the historical event of Jesus' crucifixion. Some would also say it refers to "God's" Friday. Historically and liturgically, the atmosphere of this day is one of quiet sadness and mourning for the crucified and dead Jesus.

The Eucharist, as such, is not celebrated on Good Friday, but people receive the reserved elements, consecrated the previous day. The absence of the usual celebration of the Eucharist respects the historical sacrificial action of Jesus on the cross. The Church's celebration of this day emphasizes a liturgy of the Word, with a reading of the Passion narrative, and psalms prophesying the suffering of Jesus.

An atmosphere of quiet and even silence is appropriate and to be encouraged, even in this day and age, with a curtailing, as much as possible, of usual secular activities.

THE GREAT VIGIL OF EASTER

The annual celebration of the Resurrection of Jesus dates back to the first generation of Christianity. The original celebration of what would become the Sunday of the Resurrection or Easter Sunday was done by way of a vigil (Latin, vigilia = a watch or waiting. Celebrating the resurrection during the night hours served as an expression of people's religious experience of Christ victorious over death and sin, and their victory along with his. All the Gospels (Matthew 28; Mark 16; Luke 24; John 20) attest to the mystery which took place during those dark hours of night, turning into the first day of the week.

With modifications, especially in respect to length of time, today's renewed Vigil service continues that ancient tradition. When the evening star became visible, there was a celebration of new fire. There were Scripture readings and prayers, emphasizing the theme of new creation and salvation through water, including the biblical stories of creation, the Fall, the flood, the sacrifice of Isaac, the Passover, the crossing of the Reed Sea, the entry into the Promised Land.

As the hours of night progressed, this theme was ritualized in an initiation into the Christian community through the water of Baptism. Our modern Easter Vigil largely includes elements of the original ritual: the solemn blessing of Easter water, the chanting of the Litany of the Saints, the plunging of the Paschal Candle, symbolizing Christ and new life, into the "womb" of the Easter water, the mixing of the water with holy and healing oils. Originally, catechumens who had been in preparation during the weeks of Lent, sometimes even for years, at this time renounced the Adversary/Satan's influence on their former lives, confessed their faith, and were baptized, anointed and dressed in white robes. Eventually, the chrismation or anointing by the bishop, evolved into a separate rite which today we call Confirmation.

During the first centuries it was common to give blessed milk and honey to the newly baptized, symbolizing that they were, in effect, still infants in the faith: neophytes, to use their term. They had symbolically crossed over into the new Promised Land, said to be "flowing with milk and honey."

Finally, as the hours of the ancient Vigil approached dawn, the newly baptized shared the Eucharist, the Body and Blood of Christ, for the first time.

In our times many parishes begin the Great Vigil of Easter with the lighting of the new fire just outside the church. From that fire the Paschal Candle, symbolizing Christ the Light and Wisdom, is lit. From the Paschal Candle the candles of the participants are lighted. This is a remnant of the ancient daily ritual of the Lucernarium = lighting of the lamps. The deacon leads the participants in procession into a completely darkened church. At three stops along the way, he or she chants "Lumen Christi = The Light of Christ", to which the participants respond "Deo gratis! = Thanks be to God!" After the third stop, all the lights in the church are turned on, adding to all the light from the participants' candles.

The deacon, celebrant or cantor then sings the ancient hymn of praise: the Exsultet, a joyous song celebrating God and Christ as the source of liberation for humanity. It is similar to the Jewish practice of the youngest in a family reciting the narrative of the Exodus Passover.

Several readings, beginning with the story of creation and ending with the great prophetic visions of the gathering and renewing of God's people, then follow.

If there are any people who are coming into the community of faith as candidates for Baptism, the ancient rite of Christian Initiation or sacramental Baptism is reenacted. In any case, the whole congregation also participates in a Renewal of Baptismal Vows, by which they reaffirm their faith in God: Father, Son and Holy Spirit, and by which they pledge to devote themselves to the service of all others in their lives.

The Great Vigil concludes with the Holy Eucharist, the first celebration of the Resurrection, centering on the theme of Christ as the Light and the Presence of our lives. It is also customary on Sunday morning to celebrate the Easter Eucharist. In many places there is a service at sunrise, while others have the Eucharist according to their regular schedules.