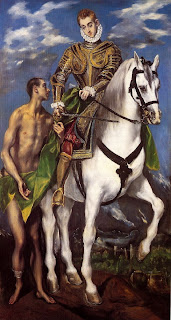 It’s interesting that the soldier/saint honored today in the traditional denominations, St. Martin of Tours, was what we moderns would call a “conscientious objector”. Martin was born sometime between 315 and 330, in what later became Hungary, but moved with his family to Italy. His father being a veteran of the Roman Legions, Martin wasn’t given a choice in entering the Roman army also...at age 15, serving in Gaul! He became a candidate for baptism [catechumen] when he was 18 and during that time had a profound religious experience. While on duty he came upon a beggar, naked and freezing, at the gates of Amiens. Having nothing but his armor and a cloak, Martin took his sword, and divided the cloak in half so that both the beggar and he were at least semi-clad. Later, in a dream, he visualized Jesus, with Martin’s cloak draped on his back, commenting to a “troop” of angels that it was Martin who’d clothed him.

About two years later, when he was 20, Martin’s unit was called up to battle a barbarian army who’d invaded Gaul. As an incentive, each soldier was offered a cash supplement before going into battle. Martin declined the offer, stating that he no longer found himself able to kill people, and requesting that he be allowed to serve only as a soldier of Christ. Predictably, he was called a coward, upon which he offered to go, unarmed and unprotected, to the front lines the next day and face the enemy with only the sign of Christ’s Cross. Despite his forthrightness, Martin was immediately imprisoned. Interestingly, during the night an armistice between the armies was somehow unexpectedly worked out, and Martin was “off the hook” and finally discharged from the army.


He subsequently had a long and interesting life: as a monk, founder of the first monastic community in Western Europe, a deacon, a priest, and eventually, literally forced by the people, the bishop of Tours.

And in the “Did you know?” category:
- our word “chapel” derives from the fact that a small oratory in Tours preserved the alleged “little cloak” [capella] of St. Martin.
- a German child, born on 11/10/1483 and baptized on the next day, 11/11, was named after St. Martin -- his name was Martin Luther.