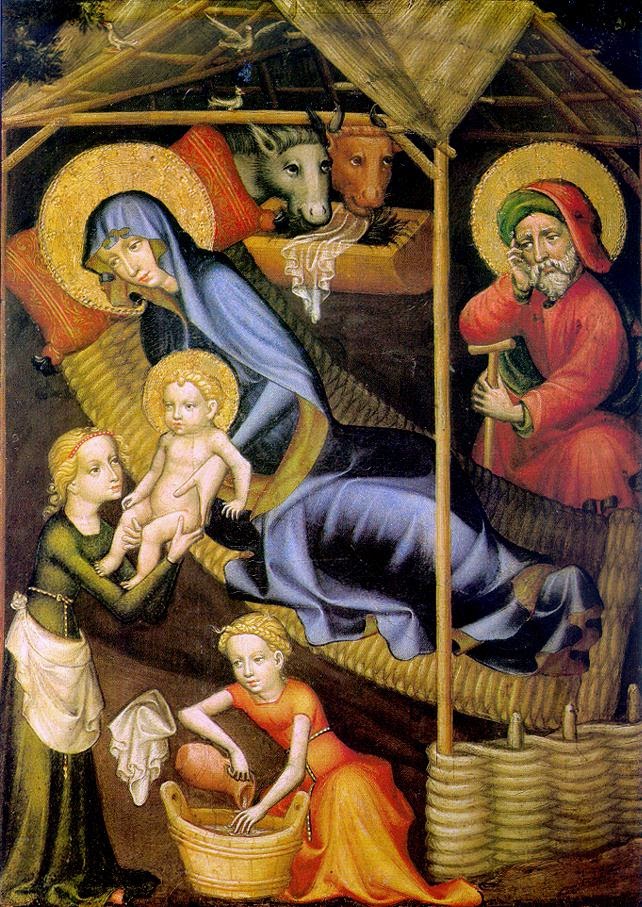 In the Ukraine, it is said, there's a legend about a woman who was too poor to decorate her Christmas tree, but shared the warmth of her home with a spider. The spider returned the gift: one night she spun her web on the tree and when morning came the tree sparkled with the sunlit web. For the people of the Ukraine the web symbolizes our connectedness, our fragility and the road we each travel toward death.

With Christmas Eve our Advent season of waiting ends and we celebrate the feast of the Lord's birth. Our weeks of Advent waiting and expectation are fulfilled in the hope which Christmas brings, hope embodied in Jesus the Son of Mary who is the Lord. There's a Hebrew word for hope, kaveh, which is also associated with a spider's web. In the web, in its connectedness, there is hope.

One of my former professors of nearly 50 years ago, Fr. Gerard Sloyan, has written: "Luke has composed a tale so profoundly religious, indeed so theological, that pedantic exegesis of its details could destroy its fragile beauty. This is a narrative of God's design…a tale of divine paradox."

Luke's is a marvelous story of how God interconnects with us, of how God's Son came to be with us in a stable, in ordinary human history, through Mary's pregnancy, bearing, and nurturing of a human child like us. Christmas is a season of birthing, of labor pains, yet a season also of people interconnecting in hope. Luke uses very descriptive words in speaking of Mary, as she and Joseph left Nazareth for Bethlehem: "great with child", "swollen inwardly". Mary set out for Judea, obedient to nature's laws, obedient to her country's laws, and especially obedient to the will of God. She was called to a birthing which may have prompted rumors of scandal among those who knew her, yet one which brought a whole series of amazing new relationships, relationships of affirmation and hope.
The census itself could be seen as an exercise in interconnectedness: "all went to be enrolled, each to his own city." Mary's life was certainly enmeshed with Joseph's, her betrothed. She was, literally, connected with her son, Jesus, who was born for us, his pilgrim followers, on the way.

The Advent and Christmas seasons lend themselves to our thinking back over all of our relationships and interconnections. Think of all the people, yourself included, who are "pregnant" with responsibilities and chores to be done so that Christmas can come about: the house-cleaning, the traveling, the parenting, the baking, and the financial worries which haunt and drive us, especially at this time. Sometimes it seems that the whole world around us, in St. Paul's words, "groans in travail…" It is our very connectedness to those who mean most to us which can, especially at this time of busyness, become most vital. They, just like the spider's web, can be our hope and support in the midst of our frazzledness and fragility.

With all the mixed feeling and emotions engendered by the Christmas season, as Christians our eyes and hearts this day turn towards the altar and the crèche in a pregnant silence, waiting…not just for the Word to become flesh again, but for flesh to become Word now, in Christ's Mass. We each want nothing less than to be born anew in God, to be in touch with the Holy.

Contemporary poet, William Wendell, has wonderfully expressed the meaning of this sacred Christmas Eve in terms of family connectedness:

No one has ever been able to buy it

For it is eternally given
each to the other
and from Him
to us.
Posted by Harry Allagree at 9:49 AM