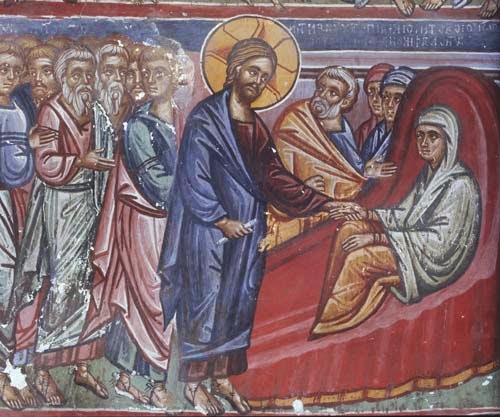 "As soon as they left the synagogue, they entered the house of Simon and Andrew, with James and John. Now Simon’s mother-in-law was in bed with a fever, and they told him about her at once. He came and took her by the hand and lifted her up. Then the fever left her, and she began to serve them." (Mark 1:29-31)

As Jesus finishes a teaching session in the synagogue, Mark notes that he’s invited to Peter’s house where Peter’s mother-in-law presumably lives with him and his wife.  Though Peter’s wife isn’t mentioned specifically here, later, in 1 Corinthians (9:5), Paul very clearly refers to her as possibly accompanying Peter on his mission.  Perhaps the mother-in-law had the flu: “she was in bed with a fever”, always risky for an older person.  In his quiet, gentle way Jesus comes to her and takes her hand.  As the fever subsides, she gets up out of the bed, and heads for the kitchen, as any good Jewish mother would do, to get them all something to eat!  Could it be that Mark inserts this little detail in his Gospel to hold up the mother-in-law as an example to us of someone looking beyond her own ills and infirmities to taking care of the needs of others?