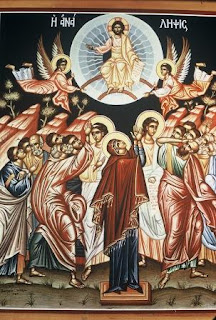 "Ascéndit Deus in jubilatióne, et Dóminus in voce tubæ"
Our high school seminary choir's polyphonic rendition of this anthem was among my favorites. This, as well as anything by Palestrina, and we did sing our fair share of his works.  This Ascension anthem is a powerful, exultant, let-out-all-the- stops hymn of gratitude for Christ's entering into the glory of his Father.
The sentiment of this great feast is well expressed in the following excerpt from Homily 29 on the Gospels, by Pope St. Gregory I:
"That the disciples were slow to believe in the Lord's resurrection was not so much a matter of their weakness as, if I may say so, of our future strength. For the resurrection itself was, on account of their doubt, demonstrated by many proofs, and when as we read these proofs, we come to acknowledge the resurrection, what else is it, but that we are confirmed by their doubting? For Mary Magdalene who believed at once, did less for me than Thomas, who long remained doubtful. For he, in his doubting, touched the scars of the wounds, and removed from our hearts the wounds of our doubts.
To confirm the truth of the Lord's resurrection, we should note what Luke records, saying: 'Eating with them, he commanded them that they should not depart from Jerusalem.' And a little further on: 'While they looked on, he was lifted up before their eyes, and the cloud took him out of their sight.' Note the words, mark the mystery. 'Eating with them,' and 'he was lifted up.' He ate, and he ascended; clearly, in order that, by the fact of his eating, he might manifest the reality of his flesh. But Mark mentions that, before the Lord ascended into heaven, he chided them for their unbelief and hardness of heart. In these things what have we to consider, but that the Lord chided his disciples at the time when he was withdrawing his bodily presence from them; that the words which he spoke at parting might remain more deeply impressed on the hearts of the listeners?
He rebuked their hardness, then, and now let us hear what he says in admonishing them: 'Go into the whole world, and preach the gospel to every creature.' Can it be, my brothers and sisters, that the holy gospel is to be preached to senseless things and brute beasts, that the Lord said to the disciples: 'Preach to every creature'? But by the phrase: 'Every creature,' is signified humankind. For the human possesses something in common with every creature. Mere existence, he shares with stones; life, with trees; feeling, with beasts; and understanding, with the angels. If, then, the human has something in common with every creature, humankind is, in some way, every creature. And, therefore, the gospel is preached to every creature when it is preached to humankind alone."
Posted by Harry Allagree at 11:13 AM