Responding To the Gift of God's Spirit 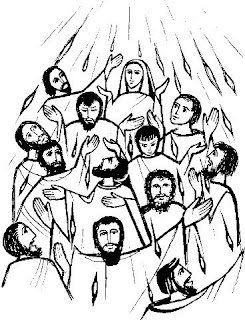 "The love of God has been poured into our hearts by God's Spirit living in us, alleluia."
It's one thing to celebrate Jesus' amazing sending of the gift of the Spirit of Love from the Father upon us. It's another thing to truly desire, to invite the Spirit to indwell us ever deeper.
We don't have sequences much in the Eucharistic liturgy of the Episcopal Church; our Roman Catholic sisters and brothers are much better known for that practice. Dr. Pius Parsch, in his The Church's Year of Grace, speaks of the origin of the sequence in the Mass. He notes that according to an "old liturgical axiom", two lessons shouldn't be read in direct succession. An intervening chant, preferably from the Psalter, is generally inserted between lessons, thus allowing a breathing space for briefly meditating on what we've heard in the lesson, in order to let it, as Parsch says, "echo in the soul".
From ancient times, therefore, a song or even two or three, has been inserted between the Epistle and the Gospel readings. The first is what we call the Gradual, probably because it was sung on the gradus or step. The second song might be a threefold Alleluia plus a verse, heralding or introducing the Gospel. Sometimes there is a chant called the Tract, a verse that follows the Gradual and precedes the Gospel reading in Lent, a supplement to the Gradual chant. It appears in place of the Alleluia and its verse. The name apparently derives from tractus, either because of the drawn-out style of singing, or because of the continuous structure without a refrain. Parsch says that early Christians, being particularly fond of the Alleluia, not unlike many Christians today, often sustained the -ia indefinitely.  In time, a text in the form of a poem developed to replace the endless ending, and became known as the sequentia, the Sequence, the song which followed the Alleluia. Hundreds of sequences were written in the Middle Ages.

With Pius V's revision of the Roman Missal in 1570, nearly all Sequences were omitted, save five of the most beautiful ones, of which the Veni, Sancte Spiritus (Come, Holy Spirit) for the feast of Pentecost was one. Written by an unknown author, it is a magnificent hymn and gives us much on which to meditate. Most noticeable throughout is the urgent voicing of human pleading to the Spirit of Love: "Come" (5 times); "shed a ray"; "shine within"; "fill"; "heal"; "renew"; "wash"; "bend"; "melt"; "guide"; "descend"; and "give" (3 times). The hymn refers to God the Spirit as "Father of the poor"; "source of all our store"; "of comforters the best"; "welcome guest"; "rest"; "coolness"; "solace"; "blessed Light"; and "sevenfold gift".


Pius Parsch concludes: "This, the Sequence of Pentecost. It has given us a deep insight into the quiet, ceaseless, irresistible activity of the 'unknown God.'"
Posted by Harry Allagree at 12:27 PM

Thank you my dear brother in Christ for explaining so well where the terms gradual hymn and sequence hymn came from.

I just discovered your blog through a Google search for images of Pentecost. I enjoy your other blog entries and have bookmarked your page. Blessings to you and your continuing ministry.