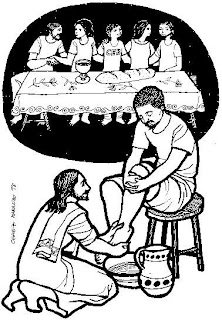 Canon Richard Mansfield writes: "There is a story about a mother and her son having an argument at the breakfast table on Sunday morning, about whether the son was going to go to church or not. Finally, the son said, 'I can think of two good reasons why I shouldn't go to church. First of all, I don't like any of the people there very much. And secondly, none of the people there like me.' The mother answered him right back saying, 'Well, I can think of two good reasons why you should go to church. First of all, you are 45 years old, and secondly, they pay you to be the Rector.'" That story pokes fun at something which can and does become an issue in many congregations at times: a love/hate relationship between priest and people, or simply between people and people. Many times, it doesn't degenerate to that level, but there is often estrangement, distance, invisible barriers.
I'm willing to bet that at least some of us will feel uncomfortable reading the Gospel passage for Maundy Thursday (John 13:1-17; 31b-35) dealing with Jesus washing the disciples' feet. Parenthetically, ever notice how difficult it is to recruit volunteers to come forward to have their foot washed on Maundy Thursday?! This year I read of a parish which is going to have a washing of hands instead of feet! I think it's not so much the prospect of washing someone else's feet that makes us uncomfortable. It's having someone wash our feet. We're not the only ones who have felt this way. So did Peter, the leader of Jesus' followers.
It's easier to wash someone else's feet than to have them wash ours. Just as it's generally easier to serve others, than to let them serve us; or to minister to others, than to allow ourselves to be ministered to. It's a way in which you and I can avoid intimacy. It's a way to keep ourselves in a position of control. It's a way to avoid possibly getting hurt. Perhaps people in the helping professions are especially prone to this, but I think that most of us do at some time or other. I suspect that we often interpret this Gospel passage as Jesus' way of showing us that we must do, that we must serve. But maybe there's a deeper message. "What I am doing," Jesus says, "you do not know now, but afterward you will understand."
Intimacy, closeness to another, will never come about unless you and I learn how to receive as well as give. In relationships, it's truly a blessed thing to receive as well as to give. In some way, perhaps, we need God's grace more to enable us to receive than to give.
Could it be that our greatest service to one another is in our accepting the discomfort of receiving, in allowing someone else the happiness of giving to us? The late Henri Nouwen wrote: "...a gift only becomes a gift when it is received and nothing we have to give will ever be recognized as a true gift until someone opens their hands or heart to accept it."
The saving realities which we celebrate and live into anew during Holy Week, especially on this day, remind us how utterly we're on the receiving end -- beneficiaries -- of a caring, loving, gift-giving God. The very name, Maundy Thursday, reminds us that we're recipients of Jesus' novum mandatum = his new command: "Love one another as I love you." We're recipients of his love: in the command to do to each other as he does to us; in the gift of God's Son, enfleshed in Jesus; and in the Holy Eucharist, the real Presence in sign, his abiding Presence in life-giving bread, broken, indeed, but broken so as to be taken and assimilated and to bring forth new life.
In today's Eucharist, in today's washing of one another's feet, in the symbolic stripping of the altar, in sharing an Agape fellowship, we testify to God's incomprehensible love for us, even though we feel so unworthy. But we also testify to our faith, to our acceptance of that great love, by letting ourselves receive love from one another.
Posted by Harry Allagree at 1:02 AM