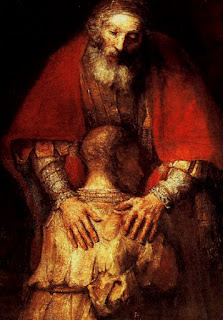 Micah:
14 Shepherd your people with your staff,
the sheep of your inheritance,
those dwelling alone in a forest
in the midst of Carmel.
Let them graze in Bashan and Gilead, as a long time ago.
God agrees


15 As in the days when you came
out of the land of Egypt,
I will show Israel wonderful things...
...18 Who is a God like you, pardoning iniquity,
overlooking the sin of the few
remaining for his inheritance?
He doesn’t hold on to his anger forever;
he delights in faithful love.
19 He will once again have compassion on us;
he will tread down our iniquities.
You will hurl all our sins
into the depths of the sea.
20 You will provide faithfulness to Jacob, faithful love to Abraham,
as you swore to our ancestors
a long time ago.


Luke:
1 All the tax collectors and sinners were gathering around Jesus to listen to him. 2 The Pharisees and legal experts were grumbling, saying, “This man welcomes sinners and eats with them.”
3 Jesus told them this parable...
...11 Jesus said, “A certain man had two sons. 12 The younger son said to his father, ‘Father, give me my share of the inheritance.’ Then the father divided his estate between them. 13 Soon afterward, the younger son gathered everything together and took a trip to a land far away. There, he wasted his wealth through extravagant living.


14 “When he had used up his resources, a severe food shortage arose in that country and he began to be in need. 15 He hired himself out to one of the citizens of that country, who sent him into his fields to feed pigs. 16 He longed to eat his fill from what the pigs ate, but no one gave him anything. 17 When he came to his senses, he said, ‘How many of my father’s hired hands have more than enough food, but I’m starving to death! 18 I will get up and go to my father, and say to him, “Father, I have sinned against heaven and against you. 19 I no longer deserve to be called your son. Take me on as one of your hired hands.” ’ 20 So he got up and went to his father.


“While he was still a long way off, his father saw him and was moved with compassion. His father ran to him, hugged him, and kissed him. 21 Then his son said, ‘Father, I have sinned against heaven and against you. I no longer deserve to be called your son.’ 22 But the father said to his servants, ‘Quickly, bring out the best robe and put it on him! Put a ring on his finger and sandals on his feet! 23 Fetch the fattened calf and slaughter it. We must celebrate with feasting 24 because this son of mine was dead and has come back to life! He was lost and is found!’ And they began to celebrate.


25 “Now his older son was in the field. Coming in from the field, he approached the house and heard music and dancing. 26 He called one of the servants and asked what was going on. 27 The servant replied, ‘Your brother has arrived, and your father has slaughtered the fattened calf because he received his son back safe and sound.’ 28 Then the older son was furious and didn’t want to enter in, but his father came out and begged him. 29 He answered his father, ‘Look, I’ve served you all these years, and I never disobeyed your instruction. Yet you’ve never given me as much as a young goat so I could celebrate with my friends. 30 But when this son of yours returned, after gobbling up your estate on prostitutes, you slaughtered the fattened calf for him.’ 31 Then his father said, ‘Son, you are always with me, and everything I have is yours. 32 But we had to celebrate and be glad because this brother of yours was dead and is alive. He was lost and is found.’”


Richard Rohr's point is that Micah, in saying what he did, had no idea that Jesus, many years later, would read those words, take them into his heart, think about them and let them form his convictions about God, and then share this good news with others in his ministry. I found myself wondering at what age Jesus might first have been exposed to the prophet, and what words of Micah's passage might have jumped out at him. Surely, if we're to judge by what Jesus later said, they were ideas such as: pardoning, overlooking, delighting in faithful love, compassion, faithfulness, etc.

With that foundation, Jesus set out, in his early 30's, to talk with and to share with anyone who'd listen his convictions about God whom he experienced as his "Father". With that background, we can now appreciate how understandable and believable Luke's recollection of the story is which Jesus told in order to convey this others. We can identify, probably with both those siblings, who obviously never seemed on the best of terms, because we, too, have had some of those same kinds of experiences in our own lives. We, too, have known how difficult it is to be humble enough to say we've acted really foolishly, or to work up the courage to ask forgiveness, particularly of a family member. We've also known it from the other angle: to feel resentful and cheated when we think we've done our best, with little apparent return, while someone else who's squandered their life away, comes out on top.

"What kind of experience of God," asks Richard Rohr, "allowed a peasant prophet to say such things on his own authority and eight centuries before Jesus said much the same? You have got to know this is quite amazing and game-changing." (p. 57)
Posted by Harry Allagree at 2:32 PM