The Reign of God is NOW! 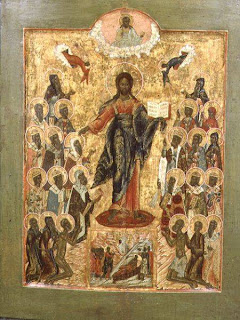 The liturgical lessons for today (Daniel 7:9-10; 13-14; Revelation 1:4b-8; John 18:33-37) bring to a conclusion once again the cycle of the Church Year. As we now stand at the brink of a new year, with the start of the season of Advent, the coming of Jesus, next week, two images come to mind: today, that of the reigning Christ, the One who’s been given “dominion and glory and kingship”, the One “who is and who was and who is to come”; and beginning next Sunday, that of the infant Jesus about to be born. We celebrate Christ’s ongoing reign over the entire universe: “all peoples, nations, and languages”, and in our everyday lives in the world; and we anticipate Jesus’ being born in the flesh, an infant lying in a manger, to initiate that reign.  In either case, “the time has arrived; the reign of God is at hand.”

You and I can’t know the glorified Christ without also knowing the Jesus of Bethlehem.  It would, however, be a mistake to let oneself be seduced by a “sweet-Jesus-in-the manger” image.  The Carmelite St. Teresia Benedicta of the Cross (Edith Stein), martyred at Auschwitz in 1942, in her magnificent spiritual essay The Mystery of Christmas. which I’ve read annually for some 53 years, observes: “Darkness covered the earth, and He came as the Light that shines in the darkness, but the darkness did not comprehend Him...This is the bitterly serious truth which ought not to be obscured by the poetic charm of the Child in the manger. The mystery of the Incarnation is closely linked to the mystery of iniquity...The Child in the manger stretches out His small hands, and His smile seems to say even now the same as later the lips of the Man: ‘Come to me, all you that labour and are burdened’...These Child’s hands say ‘Follow me’ just as later the lips of the Man will say it...Ways part before the Child in the manger. He is the King of kings, the Lord of life and death. He speaks His ‘Follow me!’, and if [one] is not for Him, [one] is against Him. He speaks also to us, and asks us to choose between light and darkness...” ("The Mystery of Christmas", pp. 22-24, Writings of Edith Stein, Selected, translated and introduced by Hilda Graef, The Newman Press, 1956)

I once saw a cartoon depicting a little man with long hair and a  beard who’s carrying a placard with the words: “Repent: the end is near!” One passerby with a worried look on his face stops to inquire: “When?” The little man replies: “Oh, in a billion years or so!”  In today’s liturgy the Church is a little like the man with the placard, reminding us of the urgency to give serious thought to ultimate matters, even though we don’t know when “He is coming with the clouds...” Several Christian liturgies use the proclamation: “Christ has died, Christ is risen, Christ will come again.” (And, by the way, if I may interject a pet peeve, the emphasis in that last phrase is not on “will” ["Christ will come again"], as if we’re dictating what Christ should do, but on “again” ["Christ will come again"]!) It’s this reality that we’re bidden to contemplate today, even as we liturgically anticipate Christ’s coming in the Advent/Christmas mystery.

The whole question of “when” the Christ will finally appear has been the favorite focus of self-proclaimed prophets and doomsayers for centuries.  It happened as the year 1000 A.D. approached, throwing people into mass confusion and terror. People sold their possessions and fled to the hills to be safe. Our generation heard a little of that as the year 2000 approached, but, of course, the new year came and passed without incident. More recently the prophetic pundits are at it again. The 2012 prediction encompasses a range of beliefs about the end of the world, according to which cataclysmic or transformative events will occur next month, on December 21. Some regard this as the end-date of a 5125-year-long cycle in the Mesoamerican Long Count calendar.

A New Age interpretation claims that this date marks the start of time in which earth and its inhabitants may undergo a positive physical or spiritual transformation, marking the beginning of a new era. Others, mostly fundamentalists, suggest that the date marks the end of the world, or a similar catastrophe. Scenarios suggested for the end of the world include the arrival of the next solar maximum, an interaction between Earth and the black hole at the center of the galaxy, or Earth's collision with another planet.

Scholars from various disciplines have summarily dismissed the idea of such cataclysmic events. Professional Mayanist scholars tell us that predictions of impending doom aren’t, in fact, found in any existing classic Mayan accounts, and that the idea that the Long Count calendar "ends" in 2012 misrepresents Mayan history and culture. Astronomers and other scientists have outright rejected the proposals as pseudoscience which conflict with simple astronomical observations and amount to "a distraction from more important scientific concerns, such as global warming and loss of biological diversity". Such predicting is little bit like the Charlie Brown-trying-to-kick-the-football syndrome, with Lucy inevitably pulling the football away at the last minute. Jesus’ simple message to you and me is that “The reign of God is within you”. The “when” of Christ’s coming isn’t the central focus. Faith bids us to be busy about the real work of loving God and one another.

The other temptation during these next four weeks as the holidays approach, of course, is to lose ourselves in getting and spending. The surrounding society is already playing upon our national addictions and our inability to delay gratification, bombarding us with the glitter and tinsel and talk of the “bottom line”. This year Wal-Mart and other purveyors of mostly non-essential “things” didn’t even wait for Thanksgiving to be over, but enticed folks away from the dinner table with the turkey and trimmings fairly unswallowed in their mouths, much less digested! Buying into all this senseless foolishness, is a colossal distraction and diversion from the urgent, pressing reality of the needs of real people all around us: Palestinian people in Gaza and Jews in Israel dodging live rockets and real people dying; the approximately 12 million people who are jobless; those who are routinely ignored and shuttled aside in the health care system; our LGBT sisters and brothers who continue to be victimized by proposed legislation, such as that in Uganda; those who in just two states, New Jersey and New York, have lost homes and possessions, and live not only without power or clothing or food, but many times are alone and in despair. We can also be sidetracked even, from our own inner needs for genuine renewal, spiritual balance, and God’s healing grace.

Today’s liturgy and those during Advent bid us to enter into a deeper, more serious reflection on what’s truly ultimate in our relationships and in our living, both with others and with God. ”I saw one like a human being coming with the clouds of heaven... To him was given dominion and glory and kingship, that all peoples, nations, and languages should serve him.” “Grace to you and peace from him who is and who was and who is to come...who loves us and freed us by his blood.” “Everyone who belongs to the truth listens to my voice.”

You and I are called to promote and participate actively in the reign of Christ, to enter into it intentionally, and from today through the Advent season ahead is as good a time as any to begin doing that. The reign of Christ bids you and me to live each day as if it were our last, to realize that there is only the “day of the Lord‘, and that that day is every day.

The late Fr. Karl Rahner, great Jesuit theologian, says this in his book The Eternal Year (Helicon Press, 1964, pp. 15-16): “...Christ is in a mysterious way already present in the believer as his future. This future has already come into the believer in a hidden way; he is already, in a hidden way, what he will be when all that is now hidden is unveiled. What will one day be our complete perfection has already begun. And this reality begins precisely because we believe. It is by faith that we are the people of God and children of eternal life, in whom the strength of eternity has already become an operative reality. This one event that is ‘now‘ taking place in the world began with the incarnation of God’s Son...This event will be completed with Christ’s ‘Second Coming,‘ which is not so much a second arrival as a bringing to perfect completion God’s own life already established in the world by the Christ event [emphasis mine]. This event permeates the believer to the extent that he believes and loves. The believer already possesses his future because his future is Christ...”
Posted by Harry Allagree at 3:22 PM