Hope In His Coming: the Key to Justice & Peace 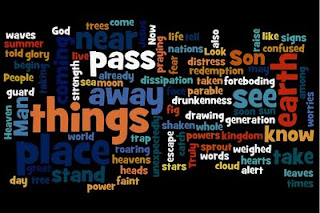 Storms of fierce rain and wind came through Northern California this morning. I arose at 6 AM and turned on the patio light to see how bad it was. Just after turning the light off, I noticed a quick glow out in the distance and the electricity went off: a blown transformer. Things died down in the next few hours, but when I arrived at church I found that they had the same problem: no electricity. By then the sun had begun to rise, and making do with candles and flashlights the service ushering in the Advent season commenced. It was interesting standing together in the semi-darkness and praying, “Almighty God, give us grace to cast away the works of darkness, and put on the armor of light...”

The very origin of Advent is somewhat obscure. Apparently it came from Spain or Gaul where the Christian community observed a six-week fast, beginning with St. Martin’s feast on November 11. Gradually it was reduced to a four-week period. The Eastern Church, for the most part, prepares for Advent with fasting, beginning on November 15 and continuing through Christmas Eve.

Originally, the Christmas event wasn’t associated with God as a child. Rather, a close connection was made between the coming of the Word made flesh and the mystery of Jesus’ death and resurrection. You get a hint of this if you look at the Collects and Scriptures of the three Sundays prior to our Advent 1. Christ’s incarnation brought about redemption. The Son of God, the Father’s Word, became flesh according to the Father’s will, leading eventually even to his ignominious death upon a cross. The birth at Bethlehem began the journey to Calvary.

Even the images associated with Christmas, as it was first celebrated in the 3-4th centuries, are more severe than tender. Jesus is shown to be the true and all-victorious Sun. The prophet Malachi writes: “For behold the day comes, burning like an oven...the day that come shall burn them up...But for you who fear my name the sun of righteousness shall rise, with healing in its wings...” (4:1-2) The liturgy’s first reading today from Jeremiah (33:14-16) echoes that, referring to a “righteous Branch” which will spring up  to “execute justice and righteousness in the land...Judah will be saved and Jerusalem will live in safety. And this is the name by which it will be called: ‘The Lord is our righteousness.’”

Jesus who came in the flesh is viewed as the Sun, the shining out, of God’s righteousness. Though introduced to angels, shepherds and the wise among the Gentiles as an infant, Jesus would grow to manhood as the Holy One who establishes God’s reign of righteousness. Part of his growing and maturing necessarily involved human and personal suffering and death.

Advent celebrates our waiting in solid hope on God’s coming, in the person of Christ, to reign at the conclusion of human history. St. Cyril of Jerusalem writes: “We proclaim the coming of Christ: not just a first coming but another as well that will be far more glorious than the first...At his first coming, he was wrapped in linens and laid in a manger; at the second, light shall be his robe...Let us therefore not stop at his first coming but look forward to the second...” (Catechesis 15:1)

Nevertheless, we need to be realistic about Advent’s full meaning: we do wait for and celebrate Jesus’ birth with all its tenderness, beauty and majesty. At the same time we take seriously the liturgy’s assurance: “Christ will come again.” In the meantime, there’s the painful necessity of the cross in each of our lives as in Jesus‘ life.

During Advent we become vividly aware of two frustrations. 1 Thessalonians (3:9-13) alludes to one of these. Paul prays that God and Jesus may bring Paul back soon to his beloved Thessalonian community. He prays that they may “abound in love for one another and for all”, in other words, for the Lord’s true and tangible presence among them until his final presence, his “coming = parousia: return/advent/presence...with all his saints”.

Advent invites us, calls us, to enter into an expectation and longing which you and I may never, or rarely, have actually experienced. Such Advent hope can’t be feigned. Neither can we replicate the longing which Paul had and which he prayed the Thessalonian Christians would have in exactly the same way.

Perhaps you and I can come to this kind of longing and hope by living, particularly through the next three weeks (Christmas is early this year!), in deep prayer for one another. Think of how often we’re physically present to each other, but not really present in Christ. The aim of our Advent discipline is to experience God-with-us, Emmanu-el, God’s coming to us in the very people and context in which we live day to day, and especially through our mutual ministering to one another.

God’s Word is a surrogate for God, and, as people of faith, you and I are its designated bearers. Advent reminds us that there will  be another advent, a coming of our God, in which God will be present to the world in a way it has never experienced: through Jesus the Christ in the fullness of God’s glory. Paul’s reference in the Epistle to “the coming of our Lord Jesus with all the saints” echoes the prophet Isaiah: “For as the earth brings forth its shoots and as a garden causes what is sown in it to spring up, so the Lord God will cause righteousness and praise to spring forth before all the nations.” (61:11) When Christ comes on “the day of the Lord”, humanity will finally have an inkling of what true justice and peace is.

Which brings us to the second frustration of which Advent makes us aware. This waiting upon the future, this attempt by the Lord that “he may so strengthen [our] hearts that [we] may be blameless before our God and Father at the coming of our Lord Jesus” has everything to do with longing for a God who will vindicate and “comfort all who mourn”, as Isaiah says: a God who works justice and peace.

But only a follower of Jesus out of touch with reality today can presume to be called “Christian” without taking personal responsibility for the work of justice and peace in the world. The commitment we make in Baptism requires it: to “proclaim by word and example the Good News of God in Christ”; to “seek and serve Christ in all persons”; to strive for justice and peace among all people, and respect the dignity of every human being”. That’s a demanding process for each of us. Doing justice and seeking peace in the 21st century, as one writer expresses it, “rest[s] ultimately in the disarmament of the human spirit to God, who alone can give authentic peace. Indeed, to have peace in the world, we must first have peace within ourselves...” The alternative to true justice and peace is violence to body, mind and spirit, violence which has many faces: exploitation and oppression of the poor, especially women and children; deprivation of human rights; economic greed; neglect and abuse of the aging and the helpless; and innumerable other acts of inhumanity.

Just as our Thessalonian sisters and brothers long ago, you and I understand justice and peace to be gifts of a compassionate and loving God. Hopefully this awareness will prompt us to pray constantly, personally and together, and through commitment to the Scriptures, to Tradition and using our God-given reason, will aid us in acquiring the wisdom to search for justice and peace in our times, as the Thessalonians must’ve done in theirs.

Theodore Ferris has written a beautiful prayer for this Advent season of hope and work which we begin today:

“Sharpen our minds, O Lord;
humble our spirits, and open our hearts
to take in the love that once became flesh,
that comes amongst us again and again,
that we may not only take him in,
but show him to others
and let others see him in us.
And we ask it in his name,
and by his power,
and for his sake.”
Posted by Harry Allagree at 3:30 PM

I just need to say that this is a very lovely Advent reflection which I much appreciate.