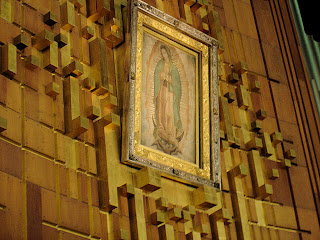 On his way to Mass one morning in the winter of 1531, Juan Diego, a poor Aztec Indian, age 57, experienced an unusual encounter. He heard music coming from Tepeyac Hill, then heard a woman's voice calling out his name. Juan Diego made his way up the hill on to discover a young woman, apparently, from her appearance and clothing, one of his own people. She told him that she was la Virgen Maria, and said that he must go and ask the Bishop of Mexico City to build una iglesia on the hill, whose purpose was to help in the conversion of the nation and bring comfort and consolation to the Mexican people.

Exercising faith, Juan Diego obeyed her request, but the message which he relayed to the Bishop met with great skepticism, even though the Bishop discerned that Juan Diego was well-meaning and a humble Catholic man. Juan Diego returned to the site of the apparition on Tepeyac Hill and reported the Bishop's reaction to Nuestra Señora. She asked that he return to the Bishop and try again, with the same message. The Bishop patiently heard him through, but this time he sent Juan Diego back to ask Nuestra Señora for a sign to verify that, indeed, it was she who wished that a church be built.

Returning obediently to the hill a second time, Juan Diego relayed the Bishop's request, and, surprisingly, Nuestra Señora agreed to do so. To Juan Diego's astonishment, a variety of roses which, at that time, didn't even grow in Mexican soil, especially in winter, appeared on Tepeyac Hill. Juan gathered roses into his tilma or cloak, and Nuestra Señora carefully arranged the roses in the tilma with her own hands. When Juan Diego returned to the Bishop, he released the tilma, letting the flowers fall at the Bishop's feet. Not only that, but the Bishop was taken aback to find an image of Nuestra Señora imprinted on Juan Diego's tilma.

Falling to his knees, the Bishop believed Juan Diego's story and gave his consent to Nuestra Señora's wishes. In time, a church was built on the site of the apparition, and some 9 million people eventually were baptized as Catholics in a short period of time, upon hearing about or viewing the miraculous image of Nuestra Señora.

A great amount of testing and modern research has been done on Juan Diego's tilma, which was woven out of coarse cactus fiber and would have been expected to deteriorate within 20 years. In the image, the pupils of Mary's eyes reflect the faces of Aztec people and clergy present at the time the image was first revealed. It appears that no paint was used, and chemical analysis hasn't been able to identify the color imprint. Studies have also demonstrated that the stars on Nuestra Señora's mantle match what people would have seen in the sky in Mexico in December, 1531.

The natives of North America, in relating their stories, often say: "I don't know if this actually happened, but I do know that it's true." The Church has always been deliberate in affirming miraculous occurrences. Nevertheless, whatever happened there on Tepeyac Hill in 1531 struck a note in the heart of the indigenous people of Mexico, and that devotion to Nuestra Señora de Guadalupe today is visibly as strong, perhaps stronger, than it was then.

God of power and mercy, you blessed the Americas at Tepeyac
with the presence of the Virgin Mary of Guadalupe:
May her prayers help all men and women to accept each other
as brothers and sisters. Through your justice present in our
hearts may your peace reign in the world.
We ask this through our Savior Jesus Christ, your Son;
who with you and the Holy Spirit lives and reigns,
one God, for ever and ever.  Amen.
Posted by Harry Allagree at 7:37 PM