The "Mary of Ant Village" 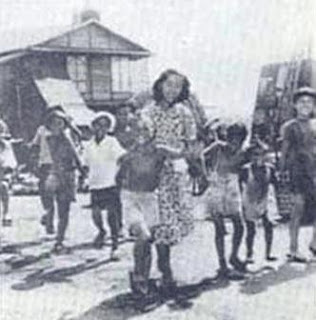 It’s amazing to me how frequently I discover, usually quite by chance, remarkable stories of contemporary saintly women and men who are completely unknown to me and, I suspect, to countless others. I’m always inspired to realize the immense amount of human good being done so quietly and unobtrusively all over the world. It definitely counterbalances the endless stream of negative news of evil interactions across the globe, and gives one tremendous hope that the universe is being upheld by such noble souls. Such is the story of my most recent find: Satoko Kitahara.

Satoko Elizabeth Maria Kitahara was born August 22, 1929, the youngest daughter of an aristocratic family, descended from the ancient Japanese Samurai and from Shintō priests. The early part of her life was normal and quiet. In 1940, however, with the entry of Japan into World War II, her family life was suddenly disrupted. Like many Japanese people early on, Satoko’s family supported Japan’s military effort, believing in its honor and integrity. Her father and brother-in-law were sent to fight in the army. Her older brother was summoned to work at the Nakajima airplane factory. Satoko herself also willingly worked there. Since Tokyo was under continuous bombing, the days were marked by frequent warning sirens. Like millions of her fellow citizens, Satoko lived in constant fear and anxiety, and miraculously escaped unharmed, though in deep shock, when a bomb fell on her workplace. It was here that she initially contracted tuberculosis, though she seemed to recover. By this time also, her brother, physically and psychologically debilitated, succumbed to pneumonia. It was in this setting that Satoko spent her early adolescence.

Japan experienced the full trauma of war when the people learned of the atomic bombs which devastated Hiroshima and Nagasaki, taking countless lives and inflicting unspeakable injuries, as well as by the nation’s inevitable humiliating capitulation and surrender which followed. Tokyo had become a field of ruins. Many died from hunger, while others suffered the uncertainty and daily struggle to survive. One of the severest problems facing the Japanese people after the war was how to deal with massive numbers of refugees in a society plagued by unemployment, poverty and hunger. Thousands of people flocked to the major urban centers. Satoko’s own family welcomed many of their relatives who’d lost all their possessions.

Despite all this, Satoko decided to devote herself again to her studies. She had developed a great admiration for the work of Dr. Albert Schweitzer and she, too, dreamed of a noble focus for her life. Like him, she was willing to sacrifice lesser pursuits for something more essential. Pursuing her education in the midst of Tokyo’s horrible conditions at that time was a real challenge. Virtually the entire infrastructure around her had been destroyed, and so books were a rare luxury. By this time in the war, also, many young Japanese people her age had begun to realize the extent of Japan’s war crimes and became disillusioned, Satoko among them. They felt that their nation had betrayed them in putting aside the ideals of a cultured society, and began to feel that there was little hope for the future. Satoko endured and through her studies regained a sense of serenity in living. After receiving her diploma in 1949, her quest for a meaning to her life became paramount.

In a moment which Carl Jung would term “synchronicity”, Satoko happened upon Sacred Heart Catholic Church in Yokohama City. Inside it she experienced a inner awakening, uncomfortable in that it began to challenge her cultural beliefs. Satoko began wondering about Christianity. She felt particularly attracted by the peace and quiet she experienced when she visited the church. As she quietly pondered all of this in her heart, she sought out further information from the chaplain, a group of Spanish nuns, and other Catholic lay persons. Eventually, finding herself more and more drawn in wonder to the Eucharist, to Mary the mother of Jesus, and to the great joy and peace which she experienced in prayer, she decided to embrace Catholicism. She was baptized on October 30, 1949, choosing the names of Elizabeth and Mary.

In 1950, Satoko became acquainted with Br. Zeno, a Franciscan friar of the Mission of the Immaculate Conception, instituted by St. Maximilian Kolbe. He had developed a tireless ministry among the homeless and needy along the Sumida River, particularly in Arinomachi, known as the “Village of Ants”, because of the unbelieveable overcrowding of people and the level of constant activity which reigned there. The village’s inhabitants, among them many children and young people, managed to survive by collecting, recycling and selling materials discarded in the trash. The city’s leadership was so revolted by the village that they intended to level it and redevelop the area as a park.

Satoko wrote about her initial experience with Br. Zeno and the trashpickers of Ant Village: “I lay down in bed but could not get to sleep. Br. Zeno, a man without formal education, unable to read Japanese, had bridged a chasm separating two nations and two cultures. He had discovered a part of Japan I did not know existed, where thousands lived in unbelieveable destitution. Many of them lived less than a kilometre from my home! I had lived in the pampered, educated ignorance of an over-sophisticated world while this unlettered foreigner worked without thought of self in the world of painful reality...I lived surrounded by carpets and gas stoves while he went without even an umbrella into the terrible twilight world of destitution.”

Satoko Kitahara, in order to get to know the residents better, began visiting Ant Village each day to teach basic grammar to the children, and, among other things, music and hygiene. The local population responded to her efforts and appreciated Satoko’s helping them reclaim their human dignity. Nevertheless, the work was difficult and discouraging at times, and on one occasion she was seriously shaken by the criticism of a non-believer who saw her as only a “do-gooder”. “I had thought”, she writes, “I was a great Christian because I condescended to dole out some free time, helping Ants children with their homework!...It hit me know. There was only one way to help those ragpicker children: become a ragpicker like them!”

Satoko made the decision to set aside her privileged life and to live as one of the people of the village. She began to help collecting and selling material. She organized a study room and a cafeteria. She assisted in administration and in bringing in income. Her influence with local authorities was great enough that she negotiated with them to build a center with a classroom, bathroom and meeting hall. Sustained by prayer and her devotion to the Blessed Virgin Mary, she gave of herself with extraordinary selflessness to her vocation.

Sadly, her health began to fail because of recurring tuberculosis and she was forced set her work aside. She spent a long time convalescing, and found, upon her return, that another young woman had stepped into her place to carry on the work. By this time, the efforts among the people of the Village of the Ants had become well-known throughout Japan, and others lent support in eventually making it possible to relocate the village to a new and satisfactory location. In her debilitated state, Satoko continued to labor for the people of the village, though she herself was vulnerable to feelings of uncertainty, uselessness, and doubt. She nevertheless continued her constant ministry of prayer among and for the people of Ant Village, especially praying the Rosary, so much so that her reputation for sanctity spread throughout Japan and touched many other lives.

Br. Zeno advised Satoko to remain firm in prayer and in her devotion to Mary the mother Jesus. Reminding her of the Gospel call to leave the comfort of one’s home, he urged her to finally settle in the Village of the Ants, submitting her whole life to God’s will as Mary had done.  She became a simple servant of God, offering her life for the people of the village. “I want to share the life of the Ant people, to work and suffer with them, to rejoice with them as one of them...and to die for them.”

Her mission was completed as Satoko Elisabeth Maria Kitahara died on January 23, 1958. Along with Doctor Paul Nagai Takashi, she is one of the most representative figures of  20th century Japanese Catholicism. In 1981 the Catholics of Japan, supported by the Conventual Franciscans, introduced the cause for the beatification of blessed Satoko Kitahara.
Posted by Harry Allagree at 2:53 PM

Is she a Servant of God, Venerable, or Blessed?

The promulgation of the decree of heroic virtues in January 2015 means she has been declared a Venerable.