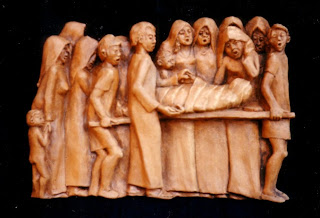 Throughout Luke’s Gospel Jesus is depicted as being bold and fearless. Earlier, in Chapter 4 (v. 29), Jesus’ hometown neighbors had become enraged over some of the comments he made in his synagogue sermon. (Imagine that ever happening to a preacher!) They hustle him out of the synagogue and begin pressing him toward a steep cliff. Instead of running off in fear, Luke notes, Jesus “passed through the midst of them and went on his way.” Then there was the time in Chapter 8 (22-25) when he set out with the disciples to sail across the harp-shaped Sea of Galilee. He decides to lie down in the back of the boat for a nap, but is soon awakened by shouts of “Master, we’re perishing!” As often happened, a storm had kicked up suddenly on the lake, severe enough that the boat was taking on water. Rising, Jesus quietly but firmly “rebuked the wind and the raging waves; [and] they ceased and there was a calm”. Again, in Chapter 13, some Pharisees warn Jesus to get away because Herod apparently had a contract out on his life. Jesus calmly sends them to Herod with a message: “Tell that fox that I won’t be rushed!”

Jesus broke taboos unhindered, healing lepers and raising dead bodies. Refusing name-dropping games and power-plays, Jesus makes relationship with him dependent on a complete reversal of culture’s accepted values. He takes a child in his lap and says: “Unless you become as little children, you can’t be part of the reign of God.”

At the same time, Jesus’ confidence was superbly balanced by his human touch, his sensitivity and compassion. Mark notes, in Jesus’ dealing with a leper, that “Moved with compassion, Jesus stretched out his hand and touched him...” As Jesus travelled about the cities and villages, Matthew also notes, “When he saw the crowds, he had compassion for them, because they were harassed and helpless...” Someone, possibly, C. S. Lewis, once remarked that God has paid us human beings the embarrassing compliment of taking us seriously. There’s no question that the infallible sign of God’s seriousness is Jesus the Christ, who embodies both confidence and compassion.
Today’s passage from Luke’s Gospel (7:11-17) graphically and beautifully exemplifies both of these. It may be that stories like the restoration to life of the widow of Nain’s son by Jesus, as well as of the widow of Zarephath’s son by Elijah in the first reading (1 Kings 17:8-24), raise many difficulties, maybe even creating more pain than solace for many Christians today. From the manner of telling and from some details in the stories it’s evident that they belong to a cultural view quite different from ours, a world that might well appear even crude and superstitious to us. In this respect, these stories present tougher questions than other Gospel stories dealing with the healing of illnesses which can be given psychological or spiritual parallels.
The stories about life being restored to dead persons raise acutely the question of how God is in the world. They confront us, however much we may want to appreciate what was done for the two widows, with a sometimes vivid remembrance and awareness of other deaths in our own experience: the death of a loved one, a friend, a spouse, or a child, which are not reversed. But note that these stories are also steeped in the great hope which Jesus brings to us human beings in his living example of confidence and compassion, especially in his own dying and rising: the hope that neither our failures, nor suffering and tragedy, nor even death itself, has the power to finally name who you and I are. The Letter to the Colossians (3:3-4) assures us: “...you have died, and your life is hidden with Christ in God. When Christ who is your life is revealed, then you also will be revealed with him in glory.” In the meantime, Christ-in-us invites us to embrace the brokenness of our own self and the world, to experience the sufferings of the whole world as our own suffering, bringing to it the compassion of Jesus.
The story of the raising of the widow of Nain’s son appears only in the Gospel of Luke. The town of Nain, meaning pleasant, lovely, was about six miles S.E. of Nazareth. According to Jewish custom, a dead person was buried in the late afternoon of the day of death. A large funereal procession was expected, since honoring the dead was considered a meritorious work. Luke presents a situation of enormously tragic proportions. A son has died. Luke refers to him as a “man”, “his mother’s only son”, and Jesus calls him “young man”. The woman is a widow. The economics of the Roman world at that time generally made life precarious for most of the population, much more so for those who were really needy. Since the woman is without a husband, in addition to this unbearable sorrow of losing a son, we can sympathize with her predicament that no one will see to her basic needs or care for her at all. Luke shapes his story to emphasize how salvation, which Jesus embodies in his dealings with people, repeatedly concerns itself with those at the edge: physically, socially, economically, ethnically, and religiously.

In v. 13 Luke refers to Jesus as “the Lord”: “When the Lord saw her, he had compassion for her and said to her, ‘Do not weep’”. Lord = kyrios, in Greek, is a title signaling exalted position and even divine-likeness. Here, Jesus performs a miracle as extraordinary as the prophet Elijah's raising the son of the widow at Zarephath to life in 1 Kings. But Jesus is more than a prophet. In this scene, death meets its equal. Jesus’ sensitivity and compassion is but a prelude to his decisive, commanding, life-restoring action as Kyrios/Lord. With poise and purpose, he steps forward and, with a gesture which surely shocked not only the pallbearers, but the whole crowd of observant Jews, Jesus touches the bier, a ritually unclean act, bringing the procession to an immediate halt. He calls out: “Young man, I say to you, rise!” At once the young man sits up and begins to speak. “And,” Luke observes, “Jesus gave him to his mother.” This is clearly a rebirth, a rebirth emerging as the result of Jesus’ confident and compassionate power. Luke holds up for all to see the transcendent power as well as the immanent intimacy of God in the actions and person of Jesus of Nazareth.

The widow apparently had friends, because Luke notes that “with her was a large crowd from the town”. It probably took a few moments for them to take in and begin to process what was happening. Luke says that their first reaction is fear. But then their thoughts undoubtedly began to click back to a time some 30 years before, when Jesus and his cousin, John, were born. John’s father, Zechariah the priest, at that time had exclaimed, in a spontaneous prayer of praise: “Blessed be the Lord God of Israel, for he has looked favorably on his people...as he spoke through the mouth of his holy prophets from of old...” And now the crowd is shouting out, referring to Jesus, “A  great prophet has risen among us!...God has looked favorably on his people.” (Luke 1:68-70) The minds of at least some of them must have put together that the One acting with such command and such compassion could only be a prophetic figure. God had visited his people once again! They stood in awe and soon began spreading the news “throughout Judea and the surrounding country.”
Jesus is the bold and compassionate Lord of life with unquestionable power over death. This means that the Holy God is present in  Jesus’ action of raising the young man. We’ve learned over the past three weeks, through the mysteries of Pentecost and of the Holy Trinity, that as the Father is the power who created us in love, as Jesus is the model of loving wisdom, mercy, and compassion, so the Holy Spirit of Love gives us the wherewithal to love the world of things and people with the love of Jesus.

Particularly in our contemporary church context, many seem to equate the “salvation” which Jesus brings, along with God’s reign, as belonging to a future time and place beyond that of our own. Our understanding if frequently in rather limited terms: focusing on forgiveness of sins and resurrection to eternal life as the primary, if not the only, benefits for us. But that isn’t the reign of God which Jesus proclaimed and inaugurated. The reality of God’s reign belongs as much to the present as to the future, and it runs counter, as it did for Jesus, to those elements of our politics, economics, and social boundaries which tend to rob people of life and blessing here and now. As much as “being saved” involves wanting to confront and defeat the more dramatic forces of evil in the world arrayed against us, it’s ever so much more about recognizing Jesus as the true Lord of our life, here and now, and about opening the way for his saving mercy and compassion to touch other lives through what you and I say and do every single day.

The Collect, which we prayed earlier, asks that by God’s “inspiration we may think those things that are right, and by your merciful guiding may do them...” Inspiration = breathing into. Jesus’ parting words to us through his Apostles was “Go into all the world and proclaim the good news to the whole creation...” He assured us that in this mission and ministry the Spirit, the breath, the wind (ruach) would guide us. You and I are called to speak and act with boldness, with confidence, with definiteness and clarity: not a confidence born of ourselves, but of the in-breathed Spirit. We’re also called to do this with great sensitivity and compassion for every person who comes hungering for the Word of life, and exactly as they come to us, not foisting our own expectations or agendas upon them, but with respect, patience, courage, persistence, and, above all, with love, holding out to them the possibility of a rebirth through relationship with Jesus the Lord. Poet, Joe McCarthy, writes this:
“When Christianity happens
it is such a stranger
We call it by a special name,
We call it a saint.
Dumbstruck by the phenomenon
of Francis of Assisi
Our only reaction is:
‘My God, it works!’
The rule of sainthood will
never change:
‘You shall love the Lord your God
With all your heart,
With all your soul,
With all your mind,
With all your strength,
And you shall love your neighbor
as yourself.’
All the fuss and feathers
of the world East and West
Are here reduced to two questions:
How deep is our touch with Him, and
How deeply are we in touch
with others?”
(From Papal Bulls and English Muffins: Meditations for Every Day in Lent, Paulist Press, 1974)

Posted by Harry Allagree at 4:21 PM