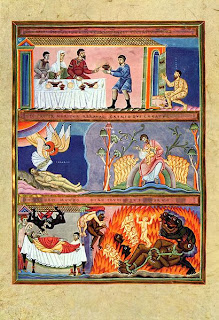 With the impending possibility of the nation’s finances and government grinding to a halt this week because of the willful intransigence of a group of small-minded, ignorant, self-aggrandizing ideologues in Congress, totally irresponsible and uncaring about the real and critical needs of poor, needy, dispossessed, hardworking U.S. citizens, today’s Scriptures could hardly be more timely.

Even a boxer is guaranteed
someone
to stand in his corner
between rounds of brutal blows
Someone to care for his needs
before the bell would summon
to yet another round.
How many pilgrims
have struggled to their corner
only to be alone?
Are we not to step between the ropes
to wipe a forehead or
to offer a word of encouragement?
To risk the stain of sweat
the sting of blood
the despair of agony?

Posted by Harry Allagree at 3:45 PM