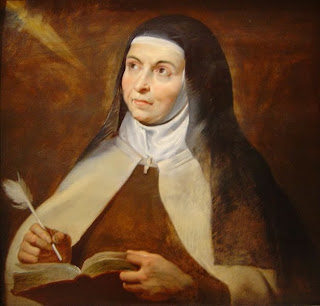 "It seems very easy to say that we will surrender our will to someone, until we try it and realize that it is the hardest thing we can do if we carry it out as we should. The Lord knows what each of us can bear, and, when he sees that one of us is strong, he does not hesitate to fulfill his will in that one.

Do not fear that the Lord will give you riches or pleasures or honors or any such earthly things; his love for you is not so poor as that. And he sets a very high value on what you can give him and desires to recompense you for it since he gives you his kingdom while you are still alive. Would you like to see how he treats those who make the prayer 'Your will be done' from their hearts? Ask his glorious Son, who made it thus in the Garden. Think with what resolution and fullness of desire he prayed; and consider if the will of God was not perfectly fulfilled in him through the trials, sufferings, insults and persecutions which he gave him until at last his life ended with death on a cross.

So you see what God gave to his best beloved, and from this you can understand what his will is. These, then, are his gifts in this world. He gives them in proportion to the love which he bears us...For my own part, I believe that love is the measure of our ability to bear crosses, whether great or small. So if you have this love, try not to let the prayers you make to so great a Lord be words of mere politeness, but brace yourselves to suffer what His Majesty desires. For if you give him your will in any other way, you are just showing him a jewel, making as if to give it to him and begging him to take it, and then, when he puts out his hand to do so, taking it back and holding on to it tightly.

Such mockery is no fit treatment for One who endured so much for us. If for no other reason than this, it would not be right to mock him so often -- and it is by no means seldom that we say these words to him in the 'Our Father'. Let us give him once and for all the jewel which we have so often undertaken to give him. For the truth is that he gives it to us first so that we may give it back to him..."
(From The Way of Perfection)
Posted by Harry Allagree at 11:49 AM