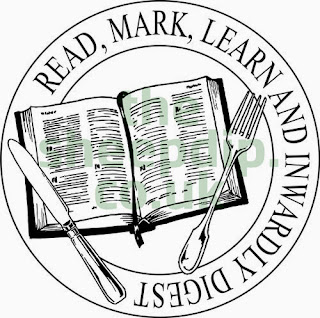 In today’s Collect we pray: “Blessed Lord, who caused all holy Scriptures to be written for our learning: Grant us so to hear them, read, mark, learn, and inwardly digest them, that we may embrace and ever hold fast the blessed hope of everlasting life, which you have given us in our Savior Jesus Christ...” This is why the Church’s liturgy proclaims the Hebrew and Christian Scriptures, the Bible, to you and me at every celebration of the Eucharist.
We’re to hear them, opening our minds and hearts with willing receptiveness. We’re to read them, either quietly in personal prayer or aloud in the liturgy, distinctly and coherently, so as to convey that we understand the words in context to others. We’re to mark them. Perhaps you’re a reader like me who keeps a pencil or pen handy to literally mark words and passages, but more important is the marking of the Word indelibly on our hearts and on our daily actions. Through the hearing, reading, and marking we’re meant to learn something, not simply to let the words pass through one ear and out the other.  And we’re to inwardly digest them, to chew on them, to ruminate on what’s read or spoken, exactly like a cow chewing its cud to promote good digestion of food.
The Collect further notes two reasons for this very defined and thorough process: 1) that we may “embrace”, i.e., wrap the arms of our being around “the blessed hope of everlasting life,...our Savior Jesus Christ”, and 2) to “ever hold fast” to this blessed hope. In a way, that’s the very thing Bishop Beisner’s Bible Challenge to us this year is all about. Isn’t it ironic, though, that you and I would have to be “challenged” to do something which one would naturally expect of people who claim to follow Jesus the Christ in their lives? In any case, hearing, reading, marking, learning and inwardly digesting Holy Scripture, as you know, is by no means always easy.
Unfortunately, difficulty in reading and gaining understanding from Scripture is complicated by rampant misinformation perpetuated over at least the past 100 years. What I mean by that is summed up in an oft-seen bumper sticker: “The Bible says it; I believe it; that settles it.” Marcus Borg, who teaches at the University of Oregon, finds that many of his students these days have a very negative view of Christianity, which they commonly express in 5 adjectives: literalistic, anti-intellectual, self-righteous, judgmental, and bigoted. In large part, they’re reacting to many radio and TV televangelists, or to campus students devoted to “converting” others to conservative Christianity, or to people in the so-called “Christian” ranks of the political Right-wing. What all these groups seem to have in common is claiming that they alone possess God’s truth in one book: the Bible. What they and many well-meaning people forget is that the Bible is not one book: it’s a whole library of books, written over countless millenia, by a multitude of writers, human beings, most of whom were not “Christian”, and all with varying agendas and motivations.
The fact is that the bumper sticker’s way of seeing the Bible, is really quite new and recent, and certainly not the “traditional” teaching of the Church. Biblical ideas of literalism and inerrancy appeared first around the 1600’s and were taken up by some Protestants only in the 19th and 20th centuries. Literal/factual biblical interpretation arose only in the late 17th-18th centuries, as a reaction to thinkers and writers of the Enlightenment era.
If we go back to the truly ancient, the truly “traditional” sources of Scripture, to the writers and thinkers of the first several generations after Jesus, what impresses us are two things:
2) a way of seeing the Christian life as relational and transformational.
So, how can we apply our hearing, reading, marking, learning and inwardly digesting to today’s Scripture passages,? What can you and I take with us to help in the week ahead? In the first reading, the Hebrew writer, called “Third Isaiah” (65:17-25), pictures for us God addressing a people who’ve returned from captivity in Babylonia in the late 6th century BC. The harsh reality of what it will take to rebuild their city and their lives begins to sink in. Theirs isn’t a unique situation, because earlier chapters about returning exiles who’ve also faced many hardships indicate that, rather than being faithful to the Covenant with God, they responded by resorting to sorcery and the gods of the underworld. Others, in the very midst of their fasting, quarrel and fight, oppress their workers, and complain to God. Nevertheless, God’s promise of blessing  on them is unconditional. If they repent and choose God’s way, the Creator is about to gift them with such newness that all their former troubles will be forgotten. Similarly, the circumstances of our own lives aren’t always pleasant. On many occasions you and I may find ourselves trying to rebuild our lives against great odds. The temptation to take the easy way out is always there. Can you and I open our hearts and expend the effort needed to allow God’s promise of newness be realized for us? In this connection, all of us have surely been confronted by the sobering reminder this week in the aftermath of devastation in the Philippines. What might we do, small as it may seem, to reach out in solidarity and address the needs of these sisters and brothers there?

St. Paul, in his second letter to the Christians of Thessalonica (3:6-13) , notes that some in the community are "living in idleness", selfishly disregarding the fact that they’re burdening the community, presuming that they have a "right" to rely on them for support, and claiming that "the day of the Lord is already here", as if that excuses them. Paul himself had given the community an example by his willingness to pay his own way and to work for necessities. The tendency of those who refuse to be part of the common effort is to become "busybodies", using their free time and energy to stir up trouble. Paul’s directive to the community is: "Anyone unwilling to work should not eat".

In today’s context, that might generally be understandable, but we have to be very careful in suggesting it. Commentator Lance Pape writes: “Several years ago, I watched a lay reader break down in angry tears as he tried to choke out the words of this lection. He works daily with people who are so disturbed and oppressed by the consequences of bad luck and/or bad decisions that they are not able to hold down a job. Christians should not let such people go hungry. It is an irresponsible distortion of the gospel we preach to allow a text like this to be read in the assembly without comment—especially in light of the self-righteous rhetoric about the evils of "entitlement" that characterizes so much of our political discourse. The key point is that this is a word against those who are able to work but, for whatever reason, refuse to do so.”

As to Luke’s Gospel passage (21:5-19), remember that Jesus had died c. 30-33 AD, the Romans destroyed Jerusalem in 70 AD, and Luke wrote this passage, as well as the Acts of the Apostles, some time between 80-90 AD, 10-20 years or so after the destruction of Jerusalem. The setting is near the Temple treasury where Jesus is standing with his disciples. Someone starts commenting on the beauty of the temple, its stones and gifts dedicated to God. Jesus the prophet demonstrates that he’s aware that, not only all the grandeur of these buildings, but the whole present order of human things, all human projects into which we pour our energy and which vie for our loyalty, all are going to soon pass away for something unexpected, new, undefined, which God has in store for them. In a very concrete way Jesus notes at length what some of the alert signals will be: general confusion, questioning, the appearance of false Messiahs, wars, insurrections, earthquakes, famine, plagues. The disciples can expect to be harassed, persecuted, arrested, imprisoned, tried and sentenced. As you, throughout your lifetime until now, have looked at what goes on in the world, in this country, in the Church, in your community or school or workplace, in your family, in your own life: do any of these signals sound familiar? We deal with the same sort of things which the ancient communities of Israel and the early Church dealt with, only in a slightly different way. How do we cope? How do we make any sense of it all? What bearing does it have on the way we live?

In the closing verses of Chapter 21 Jesus reassures the first Christians and us of a way to ensure that “not a hair of your head will perish” and that “by your endurance you will gain your souls”. Jesus says: “Now when these things begin to take place, stand up and raise your heads, because your redemption is getting near...when you see these things taking place, you know that the reign of God is coming...Heaven and earth will pass away, but my words will not go away...Be on guard so that your hearts are not weighed down with dissipation and drunkenness and the worries of this life...Be alert at all times, praying that you may have the strength to escape all these things...and to stand before the Son of Man.”

Fr. Henri Nouwen, a Dutch Catholic priest, college professor, spiritual writer and guide, who died in 1996, writes: “For many years I had read, reflected on, and taught the gospel words in Luke 3 in the story of Jesus’ baptism, but only in my later years have they taken on a meaning far beyond the boundaries of my own religious tradition...” “...As a Christian, I am firmly convinced that the decisive moment of Jesus’ public life was his baptism, when he heard the divine affirmation, ‘You are my Beloved on whom my favor rests.’ In this core experience, Jesus is reminded in a deep, deep way of who he really is...” “...God’s words ‘You are my Beloved’ reveal the most intimate truth about all human beings, whether they belong to any particular tradition or not...” (Spiritual Direction: Wisdom for the Long Walk of Faith, HarperOne, 2006, p.28) “...From the moment we claim the truth of being the Beloved, we are faced with the call to become who we are...That I am always searching for God, always struggling to discover the fullness of Love, and always yearning for complete truth, tells me that I have already been given a taste of God, of Love, and of

Truth...” (p. 33)  “Becoming the Beloved means letting the truth of our Belovedness become enfleshed in everything we think, say, or do...” (p. 34) “...What I am trying to say is that God has written us a love letter in the scripture, the written word. The written word points to the Living Word, which is God incarnate in the person of Jesus. In both the Living Word and the written word, God continues to speak--personally and in a quiet voice. We speak the word of God to each other out of the silence of listening to God...Or, to put it in another way we encounter God in the word through the disciplines of obedient listening, sacred reading, humble speaking, and spiritual writing.” (p. 101)

Posted by Harry Allagree at 7:41 AM

Oh, my, what a fine message. And written with such love
!
I think I'd like to add a word to Jesus's words: "“By your endurance AND YOUR LOVE you will gain your souls.”