Mary Magdalene and the Red Egg 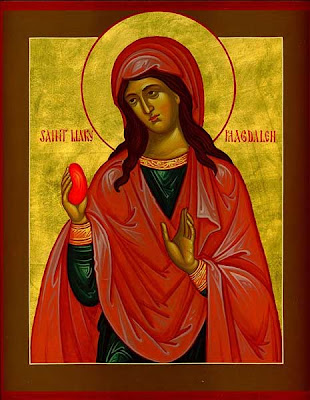 A traditional pious legend passed down in the Eastern Church holds that St. Mary Magdalene was bringing cooked eggs to share with the other women at the tomb of Jesus. The eggs in her basket miraculously turned brilliant red when she beheld the Risen Christ. The egg is taken to represent the  boulder over the entrance to the tomb of Jesus.

Another common legend talks about St. Mary Magdalene's role as an evangelist, helping to spread the Gospel. It says that after Jesus' Ascension, Mary travelled to visit the Emperor Tiberius in Rome and greeted him with: “Christ has risen” [a traditional Orthodox Easter greeting, also adopted by many Christians]; whereupon he pointed to an egg on his table and quipped, “Christ has no more risen than that egg is red.” The egg, it is said, immediately turned blood red.

We may rightly call Mary Magdalene the "first Apostle", in view of Bishop Hippolytus of Rome's (2nd-3rd century) assigning her the title of "apostle of the apostles" and the "new Eve", because of her announcement of Christ's Resurrection to the Apostles, as well as the Eastern Church's longstanding acceptance of her as one of them.  History has, unfortunately, erroneously confused St. Mary Magdalene with the unnamed penitent woman in Mark 14 and Luke 7, as well as with St, Mary of Bethany, sister of Martha and Lazarus: all separate Marys whom she certainly outdistances in popularity.

In the collect for St. Mary Magdalene's feast we acknowledge that Mary was called "to be a witness of [Christ's] resurrection", and we pray for God's favor, like Mary Magdalene, to "know You in the power of his unending life".
Posted by Harry Allagree at 8:54 PM

My website dailyoffice.org links here tomorrow for the feast of Mary Magdalene. I stole your icon of the red egg and quote you in the caption.

Not much of a photo. Just to illustrate my first effort today. It's the dark season in Yellowknife so it's not easy to get a decent cellphone pic. When I finish this project, which will probably be around Christmas, I'll send you a decent photo of the finished rosary.

Many Ukrainians believe that the egg has a special significance in pagan Slavic culture. But don't you think since pagan culture endowed all of nature with some sort of symbolism or meaning that this might be neo - paganism which tends to over play the contribution of paganism to any given culture? My son who is a evangelical Christian rejects my pysanky, renouncing them as pagan. I have no doubt that pagan meanings were overlaid with Christian connotations -egg a symbol of resurrection- however I maintain that the primitive meaning took on an elevated significance that makes it the popular and indeed elevated art that it is today. Not all traditions survive. It depends upon their relevancy from generation to generation.