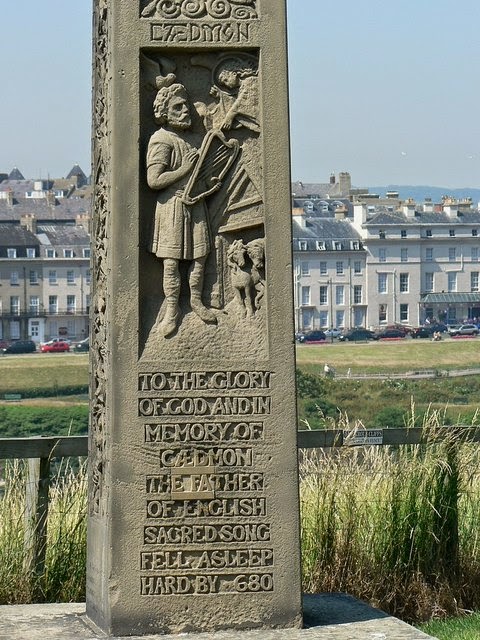 St. Bede writes in his Ecclesiastical History of the English People: "[t]here was in the Monastery of this Abbess a certain brother particularly remarkable for the Grace of God, who was wont to make religious verses, so that whatever was interpreted to him out of scripture, he soon after put the same into poetical expressions of much sweetness and humility in Old English, which was his native language. By his verse the minds of many were often excited to despise the world, and to aspire to heaven." He was referring to Caedmon, the earliest English (Northumbrian) poet known by name. Caedmon cared for the animals at the double monastery of Streonæshalch, later known as Whitby Abbey, whose abbess was the famous Hilda from 657 to 680. Caedmon was, according to Bede, originally ignorant of "the art of song" but learned to compose one night during the course of a dream. He later became a zealous monk, as well as an accomplished and inspirational poet.

Caedmon's only extant work is Caedmon's Hymn, one of the earliest examples of the Old English language. In this poem of nine lines, purportedly learned in his dream, he sings praise to God:


Now [we] must honour the guardian of heaven,
the might of the architect, and his purpose,
the work of the father of glory
as he, the eternal lord, established the beginning of wonders;
he first created for the children of men
heaven as a roof, the holy creator
Then the guardian of mankind,
the eternal lord, afterwards appointed the middle earth,
the lands for men, the Lord almighty.
Posted by Harry Allagree at 9:58 AM