Caring For the Dead 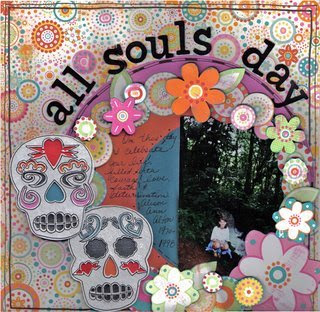 My neighbor is currently taking care of his mother's Alaskan Husky dog while she's travelling. It's a magnificently beautiful beast! What amazes me is that I've rarely heard it bark. But at various times of the day or night, presumably because of loneliness, it does what I can only describe as "keening": a soft, drawn-out mournful, longing sound. It's actually quite touching, and certainly puts me in mind today, Dia de los Muertos, of all the Holy Souls who've lived and died before us. The keening well expresses my mood today as I think about beloved family members and dear friends who have gone on beyond.

I used the Roman Catholic Office of Matins today, and got a good dose of how the great St. Augustine felt about the dead and am happy to share it with you. This is a small section from his treatise On The Care To Be Had For the Dead:

"The embalming of a corpse, the situation of the tomb, the funeral procession, are a consolation to the living rather than assistance to the dead. Yet it does not follow that the bodies of the dead are to be neglected or flung aside, especially not the bodies of holy and faithful persons, since these bodies were once the instruments and vessels used hallowedly by these souls to do all their good works. A father's ring, his robe, or some other belonging is dear to those left behind in proportion to the affection borne towards this parent. The bodies of the dead are not to be uncared for in any way, since these bodies are dearer and nearer to us than any garment. These bodies are not ornaments or aids applied from without: they are of human nature itself. Therefore, in ancient days, the funerals of just persons were arranged with holy attention; their obsequies fittingly celebrated, their tombs prepared. Such people while still alive gave strict instructions to their children about the way they were to be buried, or where their bodies were to be carried and entombed.


Remembrance and prayers for the dead are signs of true affection when they are offered for the departed ones by the faithful most dear to them. There can be no doubt but that these prayers help after life those souls who, while alive, merited them. Should some emergency prevent the bodies of the dead from being buried at all, should lack of facilities hinder them from resting in a holy place, prayers for the souls of these dead should not be neglected. The Church has taken upon herself, as an obligation, prayers for the dead; for all the dead who have died in the Christian and catholic fellowship, mentioning them not by name, but under a general commemoration. Those who lack parents, sons and daughters, kindred or friends have the benefits of these offices provided for them by the one holy Mother, common to us all. But if these suffrages for the dead, offered with faith and piety were lacking, I doubt whether it would profit these souls one iota, no matter how holy might be the places where the lifeless bodies were laid.


Since this is so, let us reflect that nothing we do for the dead whom we love matters to them, except what we solemnly supplicate for them through the Sacrifice of the altar, or through prayers and almsgiving. Yet, these prayers do not benefit all for whom they are offered, but those only who, while alive, merited that they should be benefited after death. But since we cannot know who these dead may be, it is proper to pray for all regenerate souls, lest there be forgotten one soul these benefits should and ought to reach. It is better that these suffrages be offered, even though offered in vain for those they can neither hinder nor help, than left undone for those they might have helped. Most people, however, do these things meticulously for each of his or her own near and dear friends, in the hope that his or her friends may do the same in his or her behalf. The care bestowed upon the burial of the body is no aid to salvation. It is merely an act of humanity regulated by affection, for 'no one hates their own flesh'. It is most proper that one should care for one's neighbor's corpse as best one can. If these offices are paid to the dead, even by those who do not believe in the resurrection of the body, how much more should they be paid by those who do believe in the resurrection on the last day. Thus these duties toward a body which, although dead, is destined to rise again and to live throughout eternity, are, in a way, a testimony of faith in that belief."

Eternal Lord God, you hold all souls in life: Give to your
whole Church in paradise and on earth your light and your
peace; and grant that we, following the good examples of
those who have served you here and are now at rest, may at
the last enter with them into your unending joy; through
Jesus Christ our Lord, who lives and reigns with you, in the
unity of the Holy Spirit, one God, now and for ever. Amen.
Posted by Harry Allagree at 4:44 PM