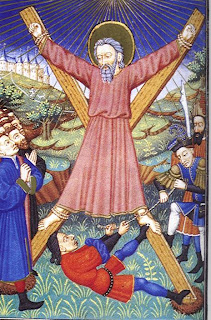 Some have speculated that Andrew could've been a middle child. His high-powered older brother, St. Peter, certainly overshadowed him. Interestingly, it was Andrew who introduced Peter to Jesus, resulting in Peter's following the Master and eventually becoming head honcho among the close followers. Both the young men were fishermen by trade. It seems that Andrew was a disciple of John the Baptizer before being called into Jesus' inner circle. Andrew seems to have always been working the background: telling Jesus about the boy with the loaves and fishes which Jesus used in feeding five thousand people; announcing to Jesus the arrival of some Greek visitors who wanted an audience.

Legend has it that Andrew later ministered among the Scythians, ancient inhabitants of what we know as Russia. Not surprisingly, Andrew has long been a patron of Russia, as well as of Scotland, probably because his relics were brought there in the 8th century. The Scottish flag features an X-shaped cross, associated with St. Andrew who is said to have been martyred on such a cross. The Brotherhood of St. Andrew, an informal fellowship of adult and young men, has been a long-standing organization in the U.S. Episcopal Church. 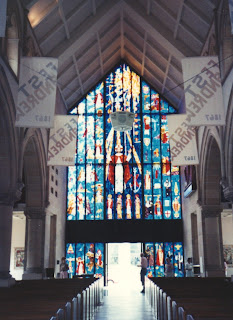 Rear window
St. Andrew's Episcopal Cathedral
Honolulu, Hawaii
From a sermon by Mark Frank:
"...And alas, what have we, the best, the richest of us as highly as we think of ourselves and ours, more than Andrew and his brother: a few old broken nets? What are all our honours but old nets to catch the breath of the world! What are our estates but nets to entangle us? What are all our ways and devises of thriving but so many several nets to catch a little yellow sand and mud? What are all those fine catching ways of eloquence, knowledge, good parts of mind and body, but so many nets and snares to catch others with?...And our life itself, what is it but a few rotten threads knit together into veins and sinews, its construction so fragile that the least stick or stone can unloose it or break all to pieces.
O blessed saint of this day, that we could but leave these nets as thou didst thine: that nothing might any longer entangle us or keep us from our Master's service! Follow we St. Andrew as he did Christ, follow him to Christ, cheerfully and without delay, and while it is today, begin our course. Cast off the networks, the catching desires of the flesh and the world, and so you also may be said to have left your nets. And having so weaned your souls from inordinate affection to things below, let Christ be your business, his life your pattern, his commands your law..."  (Celebrating the Saints, p. 453)
Posted by Harry Allagree at 4:47 PM