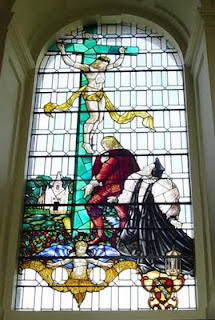 During my 13 years in the seminary, a number of the young men were tagged as "saints", sometimes out of genuine admiration by others, sometimes because others felt they spent too much time in chapel or were overly scrupulous about using "bad language", etc. Nicholas Ferrar (1592-1637), according to the great Anglican divine, George Herbert, had the reputation of being called "St. Nicholas" from the age of six!

Ferrar, born in London, attended college at Clare Hall, later Clare College, at Cambridge (also Thomas Merton's school), becoming a Fellow there in 1610. [The photo at the left is the window at Clare College Chapel, commemorating Nicholas Ferrar]. For some 10 years he travelled in Europe working as a businessman, then as a parliamentarian after he returned to England. In 1625 Nicholas moved to Little Gidding in Huntingdonshire. I can tell you from our pilgrimage there in 2007 that it's a rather remote place. Our tour bus could barely get down the lane leading to the chapel!

Ferrar was joined at Little Gidding by his mother, his brother and sister, and their families. They formed and followed a community life devoted to prayer and to charitable service in the local area. Archbishop William Laud ordained Nicholas Ferrar a deacon in 1626. Nicholas, writing to his niece in 1631, says: "I purpose and hope by God's grace to be to you not as a master but as a partner and fellow student."

Nine years after Ferrar died in 1637, the Puritans, fearful of anything smacking of "Papist Roman" practices, insisted on breaking up the Little Gidding community, of which they were suspicious and which they called "the Arminian Nunnery", destroying all of Ferrar's manuscripts in the process. So typical of small-minded, ignorant and uninformed fundamentalist bigots of any ilk, secular or religious!

"If you came this way,
Taking any route, starting from anywhere,
At any time or at any season,
It would always be the same: you would have to put off
Sense and notion. You are not here to verify,
Instruct yourself, or inform curiosity
Or carry report. You are here to kneel
Where prayer has been valid. And prayer is more
Than an order of words, the conscious occupation
Of the praying mind, or the sound of the voice praying.
And what the dead had no speech for, when living,
They can tell you, being dead: the communication
Of the dead is tongued with fire beyond the language of the living.
Here, the intersection of the timeless moment
Is England and nowhere. Never and always..."

I found Little Gidding to be a very sacred place -- it's almost palpable when you stand in St. John's Chapel -- what the Celtics call a "thin place". Little Gidding is a site where one feels, in Eliot's words, "the drawing of this Love and the voice of this Calling" to "A condition of complete simplicity/(Costing not less than everything)"..."And all shall be well and/All manner of thing shall be well/When the tongues of flame are in-folded/Into the crowned knot of fire/And the fire and the rose are one."
Posted by Harry Allagree at 10:29 PM

Thank you for those thoughts. I am a member of the Friends of Little Gidding, and today (Trinity Sunday 2012) we attended a special choral communion service in Clare College Chapel in memory of Nicholas Ferrar. A moving occasion, followed by the fellowship of a meal in the College refectory.