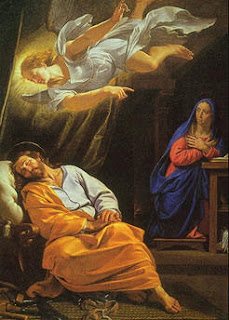 Matthew's Gospel (1:18-25) today seems a bit peculiar. It says: "Now the birth of Jesus the Messiah took place in this way..." Yet it doesn't seem to address that issue, except in five brief words later: "...until she had borne a son..." Matthew devotes the rest of the story to Joseph and the "bind" in which he found himself.

To state the problem succinctly: "...When...Mary had been engaged to Joseph, but before they lived together, she was found to be with child..." Betrothal, in those times, was as firm an obligation as marriage, though Joseph hadn't taken Mary home as yet. Divorce, dismissing her, as Joseph saw it, "quietly", that is, seemed the kinder way of dealing with Mary and would save her from public disgrace, and so he had resolved. Then, when he fell asleep, he dreamt, receiving a message from the Most High which explained this expected child's origins and his destiny.

"...You are to name him Jesus..." Yeshua = he saves. He will really be born. He'll be one of us:"God with us". Those words would've conjured up for Joseph all the saving promises of Jewish history of the Messiah. The bottom line, literally, was: "he took her as his wife"/she bore a son/"he named him Jesus". Joseph obeyed, as his wife, Mary, had done, in faith.

It's significant that Matthew quotes from Isaiah 7, from which today's first reading (7:10-16) is taken. In its original context, King Ahaz of Judah is afraid to do God's will regarding his nation. He lacks faith. Isaiah the prophet confronts Ahaz and tells him that God will offer him a sign, any sign he desires, as long as he acts in faith. Ahaz demurs, out of false piety, in order to cover up his unbelief. Isaiah cries out in frustration: "Is it too little for you to weary mortals, that you weary my God also?..." I thought about this line at the place where I worshipped this morning, as water from the recent rain dripped down incessantly from the roof outside. Drip...drip...drip. It occurred to me that all our human whining and complaining and moaning about our situations must at times weary God just a bit like that! Our dissatisfactions are like a constant drip, drip, drip. Yet, for all that, we're still God's beloved, each and every one, unconditionally, and God always seems to relent. "...the Lord himself will give you a sign...", a sign of salvation to give assurance: to Ahaz and his nation, and to us. The sign is that a young woman will bear a son in the future. He will be a king and will bring the blessing of "God with us". Immediately, of course, this refers to Hezekiah, who will later reign as a good, faithful servant of God. In its fullness, the text refers to Hezekiah's descendant, Jesus, who will be the faithful Servant, par excellence.

In the second reading from the Letter to the Romans (1:1-7), Paul tells the community that they are "called to belong to Jesus Christ." He hints that we come to belong to Christ by "the obedience of faith". This is how the birthing of Jesus the Christ takes place in us. Each of us struggles in her/his own way to bring Jesus to live in our lives, even as Joseph and Paul did. "The obedience of faith" is a constant challenge. It's uncertain. It's painful. And this side of death, we never quite have the assurance that our choices are valid, that we're making any noticeable progress in letting Jesus truly live in our lives. But we choose to go on, to obey in faith.

During these last few days before Christmas, we wait in prayer and in the spirit of Mary who bore Jesus into her life and into the world. "Let it be to me according to your word."
Posted by Harry Allagree at 9:06 PM