The Saint of Light 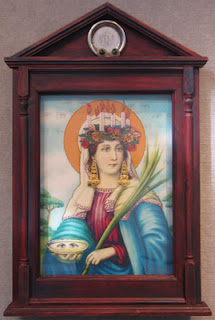 "When a martyr lives and dies in Sicily, has a world-famous song written about her which is still sung 1500 years after her death [Santa Lucia], has her name included in the Canon of the Roman Mass, is listed in the oldest Christian Sacramentaries, has two churches dedicated to her in pagan England before the 8th century, is the most popular saint in Sweden and Norway, had her biography written by a member of the Saxon royal family, and a poem about her by John Donne, and whose feast day was originally the date of the winter solstice, she has to have been some remarkable lady!

And such a person is Saint Lucy – the ever-popular Santa Lucia."

In those few words, Fr. John Julian, OJN, in his wonderful collection of stories of the saints, captures the popularity of St. Lucy of Sicily, Virgin and Martyr (d. c. 304) The details of Lucy's life are quite obscure and, understandably, many legends and traditions have arisen to fill the gaps. Lucy was martyred at Syracuse, Sicily, in the reign of Diocletian. One can argue the details that have been reported surrounding the event, but the important thing is that Lucy is one of the most important saints in the Church's history, and had a following in Rome in the early 500's as one of the most beloved of all the virgin martyrs. She is remembered for her purity of life and the gentleness of her spirit. Her name, Lucy or Lucia = light, occasioned her being looked upon as the patron of people with eye trouble. She's often depicted, especially in medieval art, holding her eyes on a dish. This was probably a cultic transfer of the representation of a pagan goddess, Lucina, shown with a tray holding two tiny cakes, looking very much like eyes. 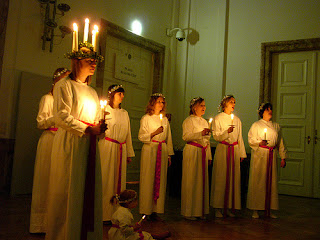 In popular piety, Lucy is honored on December 13, which, for many centuries, was the shortest day of the year. Later calendar changes by Gregory VIII shifted the shortest day to December 21/22, depending on the year. A traditional aphorism, popular in England, marks Lucy Day as the winter solstice:

Lucy holy, Lucy light:
Shortest day and longest night.
In Scandinavian countries, particularly Sweden, there has long been a festival celebration of light, both ecclesiastically and domestically. In the domestic Lucia-fest, a young girl in the family dresses in pure white and a red sash, symbolizing Lucy's faith, purity, and martyrdom, and wears a crown of lighted candles on her head with a wreath of lingonberry greens, a sign that light is returning on this day. She then, preceded and followed in procession by her brothers, "star boys", serves her parents a tray of coffee and saffron yeast buns, called Lussikattor = Lucy's cats. This latter is connected to the legend of the Norse mother-goddess, Freya, from which we get our word "Friday". Freya was said to drive an amber chariot of the sun through the skies, drawn by a pair of giant grey forest-cats.

After several transfers of St. Lucy's remains from the original site in Syracuse, her relics finally rest in the Church of SS. Geremia and Lucia in Venice.
Posted by Harry Allagree at 12:01 PM