25th Anniversary - The Order of Julian of Norwich 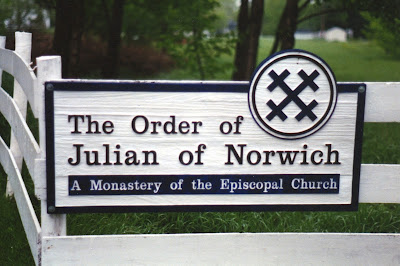 The Order of Julian of Norwich was founded on December 30, 1985, by Fr. John-Julian Swanson. The contemplative Order follows the medieval custom of including both men and women under vows as Members Regular, living in community. The motherhouse is located in Waukesha, Wisconsin, outside Milwaukee.

Beside the Members Regular, there are professed Oblate Members, as well as Associate Members (married or single, clergy or lay), who affiliate themselves with the Order by prayer and financial support as they live the contemplative life in the world.

The Order’s four-fold vows are poverty, chastity, obedience, and prayer. The Members Regular live in semi-enclosed community and fully observe the traditional vows. The Oblates, seriously committed to the spiritual and contemplative life in the world, make profession to live under an adaptation of the Regular vows after a significant period of probation. The Associates, desiring a spiritual bond with the Community in its prayer and work, follow a less stringent Rule of Life.

The Order looks first to the worship of God, secondly, to the support and strength of the wider community of the Order -- its Oblates and Associates -- and thirdly, to the service of others. The overall goal of the Order of Julian is the spiritual renewal of clergy, parishes, and individuals in the classical Christian traditions of contemplative spirituality and mysticism, and the revival of those traditions in the life of the contemporary Church and of the contemporary Christian.

In June, 1982, Fr. John Douglas Swanson, then Rector of the Church of the Resurrection in Norwich, CT, made a pilgrimage to the Julian Shrine in Norwich, England. At the time he began the pilgrimage, he had no intention of founding a monastic order, nor of becoming a contemplative monk. In fact, at his age, well over 40, he would probably not have been accepted into a monastic order. During a prayerful time in Norwich, however, he came to the realization that, in his words, “This isn’t enough! There must be something more!” Midway over the Atlantic, as he was returning to the U.S., he conceived the idea of restoring the medieval practice of a mixed monastery of men and women devoted to Julian of Norwich.

Predating the founding of the Order in 1982, groups of people in England had formed, as early as 1973, ecumenical gatherings, “Julian Meetings”, as they were called, of devotees of Julian, mainly to support one another in a life of still prayer. Ten years later, similar but separate groups, called “Julian Gatherings”, began to be formed here in the U.S.

The Order moved from Connecticut to the DeKoven Retreat Center in Racine, WI, in the Diocese of Milwaukee, in 1987, and then to Waukesha in January, 1991.

Fr. John-Julian, founder and first Guardian, retired in August, 1995, and several years ago was granted permission to live as a solitary. Sister Scholastica Marie was elected, then installed as the second Guardian in September, 1995. She resigned in April, 2003, suffering from cancer, and died six months later, on October 18, 2003. Her successor, Fr. Gregory Fruewirth, became the third Guardian on April 22, 2003, and served until he resigned in April, 2010. Mother Hilary Crupi took up leadership of the Order as the fourth Guardian on April 30, 2010.


O Lord Jesus Christ, guide and sanctify us and our brothers and sisters
whom you have called to follow you in poverty, chastity, obedience, and prayer
in the spirit of Blessed Mother Julian; protect us from danger and want,
and grant that by our prayer and service we may enrich your Church,
and by our life and worship we may glorify your Name; for you reign
with the Father and the Holy Spirit, one God, now and for ever. Amen.
Posted by Harry Allagree at 2:04 PM

I've been an associate for several months, and didn't realize Desmond Tutu is an oblate! Not that we go around name-dropping :)

Thanks so much for sharing the history. I am a new Associate so it's great to learn some of the background. As a person born in 1984, it's exciting to be part of this community.

Your information on the number of members regular is incorrect. There are currently 4 members regular living at Julian House Monastery. Fr. John Julian, the founder, is retired and lives in an apartment nearby.

Times change and numbers change from time to time. There is currently also a former Regular living at the House, exploring a return, and another Aspirant.
~ Will Melnyk, ObJN