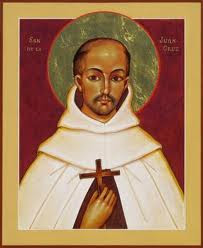 The title above was the tag given by Thomas Merton to Juan de Yepes Alvarez (1542-1591), or as we know him, St. John of the Cross. St. John had a profound influence on Merton's life. Michael Mott, in his The Seven Mountains of Thomas Merton, notes that: "No writer and no religious authority meant more to Merton in the 1940's than St. John of the Cross, and St. John of the Cross had told those who read his work to darken their memories. Merton wrote the passage down: he could not follow it. His sense of duty to history was too strong, too urgent..."

Though he never lost his love for St. John, and quoted him often in his writings, within 20 years Merton had broadened the list of spiritual writers and mystics whom he most admired. In fact, by the early 1960's Merton looked for guidance to Meister Eckhart and Julian of Norwich, among others. Merton observes, in a letter to his friend, Sister Madeleva at St. Mary's College, Notre Dame: "Julian...gets greater and greater in my eyes as I grow older and whereas in the old days I used to be crazy about St. John of the Cross, I would not exchange him now for Julian if you gave me the world and the Indies and all the Spanish mystics rolled up in one bundle..." [Seeds of Destruction, pp. 274-275]  I only include this, of course, as a way of crowing a bit about "our" Julian! But I also think it's important for all of us to realize that the effect of certain saints, their writings, and our devotion to them may change at various phases of our life, and there's nothing wrong with that. God, I believe, "sends" them to us at certain times to help accomplish what God has in mind for the direction of our spiritual lives.

I'll confess, unabashedly, that in my seminary days I avoided John of the Cross like the plague! His message, I supposed, as conveyed by well-meaning instructors, was of no interest to me. It became even worse when we had a semester's course on the mystics in our later years just before ordination. That class, because of its utterly boring presentation, killed any vestige of curiosity I might have had for St. John. I loved St. Teresa of Avila, whom I pictured as this very joyful, happy, but serious lover of God: a lively woman who enjoyed reading books, joking around during recreation, singing, and who loved water, particularly, among so many other things.  I remember standing at Niagara Falls one year with my parents, on vacation, gazing at the breathtaking sight in front of me and thinking to myself: "How St. Teresa would have loved this!" I was also hooked on St. Thérèse of Lisieux early on, as well as Teresia Benedicta of the Cross [Edith Stein] through a collection of her writings, given to me as a Christmas gift from my spiritual director in 1956. But St. John of the Cross...no way!

It wasn't until 2005 that, for the first time, I picked up and read St. John's The Spiritual Canticle. That was followed by reading The Ascent of Mount Carmel and The Dark Night of the Soul during Lent, 2006. Reflecting on the experience in a letter at that time to my Oblate director, I wrote: "Lent was very ordinary this year, but there was a curious sense of being generously fed...Part was from [a] wonderful Chapter Talk series relating to John of the Cross and Cassian; part was due to my reading St. Edith Stein's Science of the Cross [her last work before she was exterminated in the Holocaust, the manuscript of which I was privileged to actually hold in my hands when I visited the Carmelites at Echt, The Netherlands, in 1998]. Both spurred me to take up reading John of the Cross, which I've pretty much avoided through the years...It amazed me how simply he presents the real purpose of our lives, to be free from everything on this earth and to seek to be one with God, something I've heard spoken of many times. Unfortunately, I was frustrated because John never did finish the commentary he set out to write..." That latter statement highlights the importance of reading things like St. Edith Stein's The Science of the Cross, her take on what John of the Cross was trying to say, or other works, like the writings of Ruth Burrows, another Carmelite, on the mystical life.

Now that in recent years I've picked up a little Spanish, by simply reading St. John's poems in that language one can get just a small taste for how masterful a poet he was, perhaps the greatest which Spain has ever produced. If I've learned one thing from my experiences regarding John of the Cross, it's this: don't be afraid of him! Throw yourself into his poetry and other writings, and you'll love it! You may not understand it -- but, trust me, you'll love it!

"Where have you hidden,
Beloved, and left me moaning?
¿Adonde te escondiste,
Amado, y me dejaste con gemido?..."

"A deeper enlightenment and wider experience than mine [!!] is necessary to explain the dark night through which a soul journeys toward that divine light of perfect union with God that is achieved, insofar as possible in this life, through love. The darknesses and trials, spiritual and temporal, that fortunate souls ordinarily undergo on their way to the high state of perfection are so numerous and profound that human science cannot understand them adequately. Nor does experience of them equip one to explain them. Only those who suffer them will know what this experience is like, but they won't be able to describe it..." (Prologue, The Ascent of Mount Carmel)
Posted by Harry Allagree at 10:26 PM