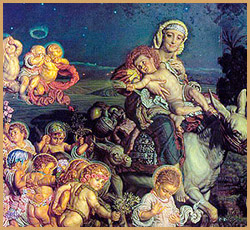 Had he lived in our times, King Herod ("the Great": hardly descriptive of him except for a few building projects) would've been at the top of Keith Olbermann's list of "Worst Person In the World"!

Herod gave "cold" and "ruthless" a whole different meaning. Out of 9 sons he had three of them eliminated; his 5 daughters apparently fared better. That's not counting all the other people, of high or low degree, for whose death he was responsible. Understandably, his poll ratings weren't real high among his subjects. Even as he approached death, he commandeered sons from noble families into custody and instructed his lackeys to slaughter them all when he died, so that the nation's inevitable mourning would seem to be for him!

The familiar story of the Holy Innocents (Western Church) or Holy Children (Eastern Church) is recounted only in Matthew's Gospel: "When Herod saw that he had been tricked by the wise men, he was infuriated, and he sent and killed all the children in and around Bethlehem who were two years old or under, according to the time that he had learned from the wise men. Then was fulfilled what had been spoken through the prophet Jeremiah: ‘A voice was heard in Ramah, wailing and loud
lamentation, Rachel weeping for her children; she refused to be consoled, because they are no more.'"
Though the incident isn't corraborated in any other historical documents, it isn't hard to imagine a man like Herod doing something like this, as insecure and threatened as he was by the Eastern sages' news that "the king of the Jews" was to be born in Bethlehem. One can imagine Herod's rage when the sages, warned in a dream not to return to Herod, "left for their own country by another road." So he ordered the brutal murder of all children, two years old and under. In reality, in such a small, obscure village, there were probably "only" between 6 to 20 children massacred. Even one would have been too many!

In reading of The Holy Children in Fr. John Julian's wonderful collection, Stars In A Dark World, I learned something fascinating that I'd not known before. He says: "In medieval England the feast of Holy Innocents often involved the reign of the “Boy Bishop” who had been elected from among the cathedral choristers and vested as a bishop. It is said that the practice was suggested by the appearance of the boy Jesus in the Temple, discussing with the elders. The tradition had it that at First Vespers (i.e., on the eve) of Holy Innocents during the singing of the phrase in the Magnificat – 'he hath put down the mighty from their thrones' the real bishop symbolically stepped down from his throne and took a place in choir, and on the phrase 'and hath exalted the humble and meek' the chosen boy bishop rose and took the bishop’s seat. The boy bishop then ruled the Cathedral for twenty-four hours: he censed all the altars, performed all the Divine Offices, and preached. He processed around the city, giving his blessing and gift tokens to all. There is every evidence that this was not an instance for horseplay or the ridiculing of clergy, but was treated rather in good spirits and was widely popular. Henry VIII abolished the custom in 1542, but Queen Mary revived it in 1552, and it was finally eradicated by Elizabeth I – but it has been revived in several Anglican cathedrals in England and America in the 20th century." What fun that would be today in this country, given the fact that we also have women bishops!

I leave you with this poem by Louise Darcy, originally published many years ago in Home Life:


TO UNDERSTAND A CHILD
To understand a child is to begin
A journey through a land of mystery.
To help another being to unfold,
And yet to leave its seeking spirit free.
Impatience is a detour on the path
And loss of temper is a desert place
Where understanding for a while is gone
Until there is an honest search for grace.
There must be putting of the self aside,
A deep humility that ever waits
To guard and guide, to stop and listen well,
A mother love that never hesitates
To show itself no matter what the hour,
That gains its inner strength from God's own power.
Posted by Harry Allagree at 11:24 AM