The Nativity of Our Savior Jesus Christ 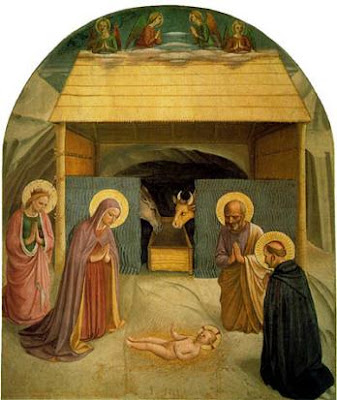 
A solis ortus cardine is part of a venerable musical tradition. The earliest Christian hymns date from the fourth century AD. St. Augustine tell us that his friend, St. Ambrose, began composing metrical Latin songs as a tool in dealing with the Arian heresy and to reinforce orthodox doctrine in the liturgy.  Coelius Sedulius (d. c. 450) composed A solis ortus cardine a generation after Ambrose. The hymn is a well-fashioned example of poetry in Ambrosian style. Despite this classic form, however, Sedulius' text also uses a clever literary idea. Called Paean alphabeticus de Christo by Sedulius, A solis ortus cardine contains an acrostic. First letters of each stanza take successive letters of the alphabet. The use of acrostics was well known in Old Testament Hebrew: for example, the rather long Psalm 119). Musically, an elegantly arched melody in the solemn Phrygian mode sets Sedulius' hymn text, which celebrates the mysteries of the Incarnation and birth of Jesus. Roman Rite churches, as well as those following the Mozarabic (Iberian) rite, quickly adopted A solis ortus cardine into the liturgy. Sedulius' hymn, expressed through Gregorian chant, has now survived for over 15 centuries.
From the lands that see the sun arise
To earth’s remotest boundaries,
The Virgin-born to-day we sing,
The Son of Mary, Christ the King.
Blest Author of this earthly frame,
To take a servant’s form He came,
That, liberating flesh by flesh,
Whom He had made might live afresh.
In that chaste parent’s holy womb
Celestial grace hath found its home;
And she, as earthly bride unknown,
Yet calls that Offspring blest her own.
The mansion of the modest breast
Becomes a shrine where God shall rest:
The pure and undefiled one
Conceived in her womb the Son.
That Son, that Royal Son she bore,
Whom Gabriel’s voice had told afore;
Whom, in His mother yet concealed,
The infant Baptist had revealed.
The manger and the straw He bore,
The cradle did He not abhor;
By milk in infant portions fed,
Who gives e’en fowls their daily bread.
The heavenly chorus filled the sky,
The Angels sang to God on high,
What time to shepherds, watching lone,
They made creation’s Shepherd known.
All honor, laud, and glory be,
O Jesu, Virgin-born to Thee:
All glory, as is ever meet,
To Father and to Paraclete.