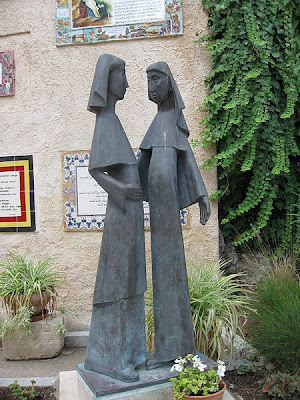 The Magnificat (A contemporary translation)
My soul proclaims your greatness, O God, my spirit rejoices in you, my Savior,
for you have looked with favor on your lowly servant.
From this day all generations will call me blessed:
you, the Almighty, have done great things for me, and holy is your name.
You have mercy on those who fear you from generation to generation.
You, O God have shown strength with your arm
and scattered the proud in their conceit,
Casting down the mighty from their thrones and lifting up the lowly.
You have filled the hungry with good things and sent the rich away empty.
You have come to the help of your servant Israel,
for you have remembered your promise of mercy,
The promise made to our forebears, to Abraham, Sarah, and their children for ever.

Many happy memories emerge when I think of Mary's "heart-song", The Magnificat, the thanksgiving hymn chanted at Vespers commemorating the privilege of Mary's become the Theotokos, the God-bearer, and of God's goodness in redeeming humankind. If I had to pick a favorite hour of the Divine Office, I guess it would be Vespers, largely because of Magnificat hymn. The hymn also recalls for me the many times it was sung by the choir at my home church, St. Matthew's Episcopal Church, Sacramento. In particular, I remember the soprano voice of Mavis Isaacson, who rendered the verses of The Hymnal 1982 version (S 247) with such grace and beauty, backed by the choir's response of the Antiphon.

Try to visualize the setting in which this prayer was first uttered. God's messenger had made Mary aware that she was to be the mother of a son, named Jeshua/Jesus, "the Son of the Most High". Not fully understanding the implications of that great grace, she had no one at hand to whom she could immediately go and pour out her heart's feelings and questions. So she travels into the Judean hill country, to the home of her cousins, Elizabeth and Zechariah, where Elizabeth had been remarkably favored with a similar blessing: the conception of John the Baptizer. Wise in the Spirit, Elizabeth welcomes Mary and acknowledges the great blessing Mary has received. Mary's emotions can no longer contain themselves, and she pours out to her cousin the overflowing gratitude of her heart, for the great dignity which has come to her and for its implications for the lives of many other people.
Mary's immediate praise and gratitude is for the grace and honor given her by the Almighty, and for God's power, holiness, and mercy. She acknowledges the Holy One's reign over all created beings, particularly God's preferential favor for the humble, the poor and the needy. Finally, Mary praises God for the fulfillment of Israel's Messianic prophecies.
Like all poetry of the Old Testament and of early Christianity, the hymn is quite simple in form. One can easily discern classic Hebrew parallelism in it. The Magnificat came into the liturgy already in the 4th century as part of the Office. There's at least one tradition which attributes its introduction into Vespers to St. Benedict of Nursia, though, in fact, he came on the scene somewhat later.
A friend passed along to me a wonderful thought, from an unpublished talk given in Tucson, AZ, by Fr. Richard Rohr:
"If Jesus is the archetype of how the divine gift is being given, Mary is the archetype of how the divine gift is always received: it is always totally free and undeserved. The shocking thing is that the Scripture actually says almost nothing about Mary. No credit ratings are stated, no achievements; it doesn’t say she prayed a lot or went to the temple. No talk of heroic deeds, or even love for the poor. She is the poor one herself.
Mary knows how to receive a gift with total freedom, without needing to say 'Lord, I am not worthy.' She knows how to be totally vulnerable and humble before Mystery. Mary knows she did not earn anything. It was all mercy, grace, and God’s utterly free and gratuitous choice. (Mary uses the word “mercy” three times in her Magnificat). Mary had nothing to do with it, except, of course, saying YES to it!
All divine worthiness is given—and received."
Posted by Harry Allagree at 11:31 AM