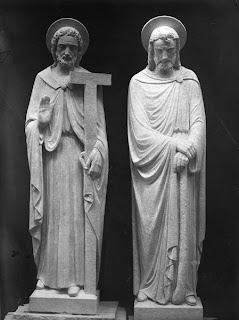 Special Collections, Cleveland State University Library
Joseph C. Motto
In the midst of some personally trying days this past week -- the death of my father's widow, the ongoing terminal illness of a close friend, family concerns, yes, and even the mixed emotions surrounding the announcement of Osama Bin Laden's death -- I can't express how comforting it was to enter into this morning's meditation using texts from the feast of SS. Philip and James, Apostles. That's James the Less, by the way, the son of Alphaeus, in contrast to James the Greater (one of the Boanerges Boys), brother of John and also an Apostle, and James, the brother of Jesus, who was Bishop of Jerusalem and then a martyr. I make that notation solely for my own feeble mind, because I'm always mixing the Jameses up, along with the Gregorys!
I found great solace in the message from Isaias (30:18-21): "The Lord waits to be gracious to you; therefore he will rise up to show mercy to you. For the Lord is a God of justice; blessed are all those who wait for him...He will surely be gracious to you at the sound of your cry...your Teacher will not hide himself any more, but your eyes shall see your Teacher. And when you turn to the right or when you turn to the left, your ears shall hear a word behind you, saying, 'This is the way; walk in it.'"
Paul, in 2nd Corinthians (4:1-6) continues the message with the comforting words: "...we do not lose heart", immediately going on to speak of "the light of the gospel of the glory of Christ, who is the image of God" found in our hearts in "the light of the knowledge of the glory of God in the face of Jesus Christ."
In John's Gospel (14:6-14) Jesus continues Paul's theme by reminding Thomas and Philip how he, Jesus, uniquely images the Father: "If you know me, you will know my Father also. From now on you do know him and have seen him...Do you not believe that I am in the Father and the Father is in me?" Jesus tells them that, if they're having difficulty setting their hearts on him, at least "believe me because of the works themselves" because "the one who believes in me will also do the works that I do and, in fact, will do greater works than these..." It resonates with the assurance which John gives in his first Letter (1:1-10), part of today's Office: "...We declare to you...what we have heard, what we have seen with our eyes, what we have looked at and touched with our hands...we have seen it and testify to it, and declare to you the eternal life that was with the Father and was revealed to us...his son Jesus Christ." There are also overtones and undertones from yesterday's Gospel (John 20:19-31) where Jesus says to Thomas: "Have you believed because you have seen? Blessed are those who have not seen and yet come to believe."
Sitting awhile with these passages brought at least a modicum of peace, knowing that in the face of Jesus we come to recognize the One who's the bearer for us of God's graciousness, mercy, wisdom, the One who speaks a loving word behind us, "This is the way; walk in it." However it is that you and I "see", we find ourselves, even in the face of all that bothers us, capable of doing for ourselves and for others "greater works", greater generosity, greater understanding, greater love, than perhaps we thought was possible.
Seeing is believing!
Posted by Harry Allagree at 3:31 PM