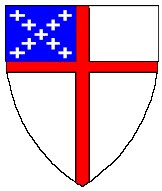 Homily given 5/1/11 at Shepherd By the Sea Episcopal/Lutheran Mission, Gualala, CA
The key to understanding the meaning and message of these past two weeks, Holy Week and the week after Easter, is well summarized in the Book of Common Prayer’s Collect for the 2nd Sunday in Easter: “...Grant that all who have been reborn into the fellowship of Christ’s Body may show forth in their lives what they profess by their faith…” That meaning and message, perhaps more than at any time in human history, needs to be understood, affirmed and lived. The daily media provide us with unlimited stories of people who say one thing and do another, of unkept promises and assurances, of commitments and covenants routinely and flagrantly ignored or causally set aside.


New Testament scholar and ordained Disciples of Christ minister, Nancy Claire Pittman, points out her fascination this Eastertide with the “theme of trust in the witness of others”, a theme so prominent in John’s Gospel passage (20:19-31) today. She sees in our time, as many others do also, how nearly every institution in American culture seems to be “infected” with deep mistrust, shortsightedness, and just plain ignorance. Much information, many claims to truth, and the actions taken on such, seem to be based, not so much on what is said, or on the factual truth or genuine motivation behind it, but on who says it. Our mistrust, particularly today in civil life and politics, spills over even into our life together as followers of Jesus.


The message of Easter, to which St. Peter, in the second reading (1 Peter 1:3-9), bears eloquent witness is essentially that what you and I see in Jesus, in his life, in his passion and death, and in his Resurrection is precisely what you and I get. “...listen to what I have to say: Jesus of Nazareth, a man attested to by God with deeds of power, wonders, and signs that God did through him among you...this man, handed over to you according to the definite plan and foreknowledge of God, you crucified and killed...But God raised him up...and of that all of us are witnesses.”


In his Treatise On Christian Liberty, the great Martin Luther observes that “from faith flow forth love and joy in the Lord, and from love a joyful, willing and free mind that serves one’s neighbor willingly and takes no account of gratitude or ingratitude, of praise or blame, of gain or loss. For a man does not serve that he may put men under obligations, he does not distinguish between friends and enemies, nor does he anticipate their thankfulness or unthankfulness; but most freely and most willingly he spends himself and all that he has, whether he waste all on the thankless or whether he gain a reward. For as his Father does, distributing all things to all...richly and freely, causing His sun to rise upon the good and upon the evil, so also the son [or daughter of God] does all things and suffers all things with that freely bestowing joy which is his [or her] delight when through Christ he [or she] sees it in God, the dispenser of such great benefits…”


Today you and I have a special reason to recognize and rejoice in this. In just a few hours, bishops of the Episcopal and Lutheran Churches of the United States and of Canada will gather on either side of the U.S./Canadian border: Episcopal Presiding Bishop Katharine Jefferts-Schori and ELCC National Bishop Susan Johnson, at St. Paul’s Anglican Church, Fort Erie, Ontario; and ELCA Presiding Bishop Mark Hanson and Anglican Church of Canada Archbishop Fred Hiltz, at Holy Trinity Lutheran Church, Buffalo, N.Y. Episcopalians and Lutherans will celebrate liturgies marking the 10th anniversary of both our Churches’ full-communion relationship which became a reality when Called to Common Mission took effect in 2001. In that momentous agreement, the members of the Episcopal Church and of the Evangelical Lutheran Church in America publicly affirmed their trust in one another, gave public witness to the reality of the “fellowship of Christ’s Body”, and publicly demonstrated their willingness to “show forth in their lives what they profess by their faith.”


Bishop Hanson recently explained that the bishops chose to meet near the border of the U.S. and Canada “to provide a unified witness to the saving grace of our Lord Jesus, to share our commitment for renewal in Christ’s Church and in God’s creation, and to serve our neighbor in need.” Presiding Bishop Katharine commented, “Ten years is only a beginning; we are yet young in this work...God truly knows no bounds…”


The Called to Common Mission agreement wasn’t reached overnight, by any means, nor did everyone, on either side, “buy in” to it, even when full-communion was adopted some 20 years after the initial dialogue. What was new and unique about Called to Common Mission involved a number of things, not least of which was that each recognized one another “as churches in which the Gospel is preached and taught”, and that “Ecumenism is not real if it is not local.” Most importantly, both Churches agreed, in the end, to recognize the validity of each other’s baptisms, ordinations, and the historic episcopate.


It was, as most of you know, no coincidence that also a decade ago, in 2001, a few years after both the Episcopal and Lutheran faith communities in the Gualala area began worshiping together here at Mary Star of the Sea Catholic Church, that a formal relationship and covenant was established under the name, The Common Mission, with the blessings of Episcopal Bishop Jerry Lamb and ELCA Bishop David Mullen, under affiliation with the Episcopal Diocese of Northern California. This, of course, grew into an organized mission, Shepherd by the Sea Episcopal/Lutheran Mission, in November, 2006. Since then, you have all proudly represented the best of mission and ministry within the Episcopal and Lutheran traditions, far better, in my humble opinion, than many larger and much older parishes. You’ve truly modeled for this community a witness of trust, and have shown yourselves to be a true fellowship of Christ’s Risen life, “showing forth in [your] lives what [you] profess in [your] faith”.


You may have noticed that, so far, I’ve not even mentioned “Doubting Thomas”! Many speak of this Sunday after Easter as “Low” Sunday, because the attendance is often lower in comparison, following the solemnity and grandeur of the Easter services. Nancy Pittman, whom I quoted earlier, also opines that another reason for folks taking a bye this Sunday may, in fact, be because they expect that the same old sermon, which they hear year after year, on “poor” doubting Thomas may be preached yet again! To be honest, all of us, preachers and congregation, need to remind ourselves that it isn’t Thomas alone who deserves our clucking over his disbelief without proof. The other Apostles had actually done no better, particularly after a woman, Mary Magdalene, had assured them that she actually saw and spoke with the risen Jesus on Easter morning. It’s just that, because of Thomas‘ absence on the day of Christ’s Resurrection, the other disciples had gotten a week’s jump on Thomas when they saw for themselves that Jesus was still alive and well. Even Mary Magdalene herself wasn’t immune, given that she became all emotional and weeping when she didn’t see Jesus at first. One could say that almost everyone in John’s account was afflicted with some sort of doubt. The story isn’t just about doubting Thomas, but about a whole gang of doubters!


Nancy Pittman observes that “doubt concerning the resurrected Jesus is not really the most pernicious disbelief” in this Gospel story. What she says is even more dangerous is “the lack of faith in one another’s witness...Communal distrust pervades this account like a noxious gas. The disciples don’t believe Mary, and Thomas doesn’t believe the disciples...No wonder that...Jesus stands up on tiptoe to look over the heads of all those disbelieving disciples and straight into our eyes, saying, ‘Blessed are those who have not seen and yet have come to believe.’”


That’s the gift of blessedness which you, in this “Common Mission”, are privileged to hold out to this community. None of you has put your hand directly into Christ’s wounds, yet you believe enough to continue gathering faithfully together each Sunday, to break the bread and drink the wine of Christ’s word and sacrament; you continue to pass on, through Baptism of those in your midst, the faith in the risen Jesus of our mothers and fathers; you bring to the sick, the dying, the hungry, the homeless of this community, the Presence of the living Christ.


One of my dearest friends, now deceased, Fr. Brendan, who was a Roman Catholic Trappist, once sent me an article which said this: “The schisms, persecutions, and polemics of our yesterdays today begin to assume a certain unreality...As the Christian world once split on the diphthong, so have Christians killed each other for a definition. That they should quarrel and divide within the great area of mystery created by the Incarnation, which they share and live by, becomes increasingly unacceptable. The most elementary lesson of a faith held in common is to love, and so to understand one another…”


Episcopalians and Lutherans, including all of us here, and those of many other denominations, are continuing to learn and live that lesson of love and understanding which Jesus taught us in his life, in his passion and death, and in his being raised up. We are all, indeed, “called to common mission”.