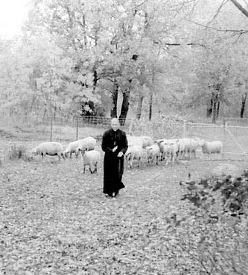 On this day in 1989 the world lost an ecumenical pioneer, and I lost a beloved friend.

Father Arthur Kreinheder, C.S.C. was an American Lutheran Benedictine monk and founder of a Lutheran religious order, The Congregation of the Servants of Christ.


Arthur Carl Kreinheder was born on October 1, 1905, in St. Paul, Minnesota. His father, Oscar Carl Kreinheder (1877-1946), was a pastor of the Lutheran Church-Missouri Synod and the president of Valparaiso University from 1930-1939. After a successful career as a businessman, Arthur went to study theology in 1950 at Lund University in Sweden, living in the St. Laurence Foundation.
Already before he had been in touch with the Taizé Community, and briefly, in 1955, became a novice in the Taize Community, founded by Brother Roger Schutz.


Fr. Arthur was ordained to the priesthood in 1956, in Lund, by Bishop Anders Nygren and Bishop Gustaf Aulen "for ecumenical work in the United States among Lutherans." He established St. Augustine's House at Oxford, MI, and founded The Congregation of the Servants of Christ, a Lutheran Benedictine community, in 1958 when some other men joined him in observing the monastic life and the daily offices of prayer. Through Fr. Arthur, from the beginning a connection was established with Östanbäck Monastery in Sweden after St. Augustine's foundation. Fr. Arthur was a leader in Christian ecumenism, particularly in the Detroit, MI area, and he was the U.S. secretary of the League for Evangelical-Catholic Reunion. Fr. Arthur died at age 84 on Friday, October 13, 1989, in a Pontiac, Michigan, hospital. He had never recovered fully from a stroke he suffered the preceding July. He is buried in the cemetery at St. Augustine's House.


I first met Fr. Arthur in 1964, during our class' Tirocinium year in Detroit just after our ordination as priests of the Society of the Precious Blood. After reading about him and his single-handed effort to establish his community, I called him and asked if I might visit St. Augustine's House, the first of many times I would go there during that year and spend time with him. He would graciously share the liturgy or the Office and a meal, and introduce me to any number of interesting people who also visited. During that time, though a fair number of postulants came to St. Augustine's , none seemed to remain. For many years Fr. Arthur was the lone member of the Congregation of the Servants of Christ, until Fr. Richard Herbel came and became Prior in 1983.


Fr. Arthur wrote to me in February, 1983, from Florida where he'd moved several years before because of his health, and said that he was in the process of deciding whether to return to St. Augustine's House. He chose not to do so, and my last communication from Fr. Arthur was a letter on August 15, 1984, two years after I'd been received as an Episcopal priest, in which he says: "What great joy to receive your letter - with so much good news - with photographs - and with your membership for The Fellowship of St. Augustine...You will be glad to know that Fr. L. L. Love, an Episcopal priest, who is also a nurse, is here to take care of me. Praise God for all His Blessings.  In Christ's love, Arthur."


In March, 1965, Fr. Arthur had come to our parish house at St. Anthony's in Detroit, along with Pastor Max Lackmann, internationally known Lutheran ecumenicist of the League of Evanglical-Catholic Reunion, as well as Pastor Larry Gotts, of Grace Lutheran Church, Detroit, social activist, and one of the prime movers in establishing and getting us young priests involved in the establishment of the Interfaith Community Center in Detroit.


But perhaps my fondest memory of Fr. Arthur was of one of my earliest visits to St. Augustine's House. It was late afternoon or early evening, perhaps in the fall or spring, and Arthur and I were standing on the porch overlooking the quiet natural surroundings. After a moment of peaceful silence, Fr. Arthur quietly exclaimed: "God is so lavish!"


May Arthur continue to support us from Christ's presence in our quest "that all may be one"!
Posted by Harry Allagree at 6:50 PM