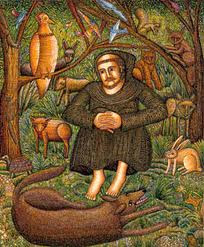 "St. Francis spent the last few days before his death in praising the Lord and teaching his companions, whom he loved so much, to praise Christ with him.  He himself, in as far as he was able, broke out with the Psalm:  I cry to the Lord with my voice; to the Lord I make loud supplication.  He likewise invited all creatures to praise God and, with the words he had composed earlier, he exhorted them to love God.  Even death itself, considered by all to be so terrible and hateful, was exhorted to give praise, while he himself, going joyfully to meet it, invited it to make its abode with him.  'Welcome,' he said, 'my sister death.'"  (St. Thomas of Celano, Second Life.)

"When the hour of his death approached, Francis asked that all of the brothers living with him be called to his death bed and softening his departure with consoling words, he encouraged them with fatherly affection to love God.  He spoke of patience and poverty and of being faithful to the Holy Roman Church, giving precedence to the Holy Gospels before all else.  He then stretched his hands over the brothers in the form of a cross, a symbol that he loved so much, and gave his blessings to all followers, both present and absent, in the power and in the name of the Crucified.  Then he added:  'Remain, my sons, in the fear of the Lord and be with him always.  And as temptations and trials beset you, blessed are those who persevere to the end in the life they have chosen.  I am on my way to God and I commend you all to His favor.'  With this sweet admonition, this dearly beloved to God, asked that the book of the Gospels be brought to him and that the passage in the Gospel of St. John, which begins before the Feast of the Passover be read.  Finally, when all God's mysteries had been accomplished in him, his holy soul was freed from his body and assumed into the abyss of God's glory, and Francis fell asleep in God."  (St. Bonaventure, Major Life.)
Posted by Harry Allagree at 7:25 PM