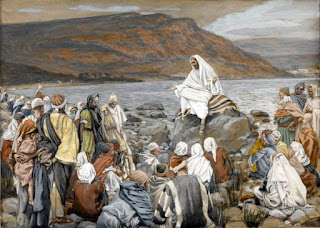 A humorous story depicts Adam and Eve as they prepare to walk through the gates of Eden, having been summarily evicted by the Almighty. Eve is all upset and in a tizzy about what will become of them, and Adam, dutiful husband that he is, reaches over, pats her arm and says: “It’s okay, dear: we’re just in a period of transition.”

The beginning of the Genesis scene in the first reading (3:1-21) symbolizes a turning point in the human experience. Humankind bought the serpent’s lie and ignored boundaries set by God. Lure of forbidden fruit and lust for godlike wisdom proved to be heady temptations. In giving in to them, the first man and woman taste the bitterness of shame and fear. Their delightful nakedness now makes them self-conscious and uneasy. The magnificent garden which was their domain soon becomes a hide-out from the Creator.

Into that setting of an original plan so dreadfully fouled up, God is depicted walking “in the cool of the evening breeze”. Notice the switch in grammar, a shift reflecting a change in relationship between God and the couple. No longer is there a mood of newness and freshness: with new light, and goodness, the couple joined in mutual helpfulness, the invitation to be fruitful, multiply, and enjoy God’s world. Here we sense only a mood of awkward interrogation, a sort of battle of wits. Something has gone awry and God wants to know why, and God begins to press the uneasy couple with insistent and pointed questions.

At the same time, even with the questions there’s a hint of God’s characteristic grace and lovingkindness. Though their embarrassment and anxiety have driven the man and woman into hiding, God takes the initiative to seek them out. “Where are you?”. Almost playfully, as in a children’s game, God gives the couple an opportunity to reveal themselves with minimal embarrassment.

Yet, God’s questions are met with only a series of evasive answers. Adam and Eve fail to use the space which God offers them to voice the real reason for their avoiding God. As you and I have done so many times since then, Adam deals with the symptom, not the cause: “I was afraid because I was naked; and I hid myself.” It’s sometimes easier for us to confess our fear and shame, than it is to own up to our selfishness. In response, God removes any wiggle room and crowds the man with back-to-back questions: “Who told you that you were naked?”, “Have you eaten of the trees?” Only his selfish actions could cause Adam’s shame as God puts him on the spot. In typical human fashion, Adam projects the blame elsewhere: implicitly on God, when he reminds God: “The woman whom you gave me to be with me...”; then, on Eve: “...she gave me the fruit of the tree...and I ate.”

God then turns to Eve who, in admitting her part in the debacle, quickly singles out the serpent for blame. The whole scene is a tragic, bitter moment in human history. We can imagine ourselves crying out with God: “How could you?! Why would you?!”

The original couple, created from nothing out of sheer love and commissioned to oversee all of creation as responsible stewards, have shirked their responsibility and, as a consequence, forced the God who blessed them to pronounce judgment against them. God is depicted first as cursing the serpent, whom the Book of Revelation (12:9) associates with Satan, the Adversary. The judgment also spills over onto the whole human family, then and to come: there will be constant enmity between good and evil; woman will bear children in great pain; husband/wife relationships will be a continual struggle for equality and balance; human beings will endure hard work and sweat in order to produce food from the cursed ground. And, when all is said and done, human beings will die and return to dust.

What was a state of continual grace and happiness is now a state of continual misery, which St. Julian of Norwich describes variously as a continual “muddle”, an imprisonment, and our natural and highest penance. Theologian Phyllis Trible speaks of the couple’s “shared sin”: “Whereas in creation man and woman know harmony and equality, in sin they know alienation and discord. The suffering and oppression we women and men know are marks of the fall, not of our creation.”

It’s a story of total disruption and displacement. Life’s basic relationships are left in shreds. Human beings hide from the God who created them. The man protects his reputation at the expense of his helpmate. The woman degrades herself to the level of an animal, declaring herself weaker than the serpent. God the loving Creator is made to render harsh and prolonged judgment on creation.

Yet, despite all this, God remains present. St. Mark, in today’s Gospel (3:20-35), testifies that God is there, present, in Jesus of Nazareth. Jesus’ relatives received news of God’s reign, his presence, with some embarrassment. A bit red-faced at the reports of his seemingly wild claims, his wondrous healings, and the controversies which these generated, they try to hustle Jesus into hiding. No family likes to hear that one of their own “is beside himself”. So they send a message in from their place in the crowd asking Jesus to come home. Jesus, who had once preached, “The one who loves father or mother more than me isn’t worthy of me...”, instead of responding to them, looks out over the crowd of his followers and says, “Here are my mother, my sisters, and my brothers.” Jesus practiced the priorities of God’s reign as truly as he preached them.

Jesus‘ opponents, the Scribes, greet his words and works with blasphemy. They see his power over demons, not as the work of someone deranged or psychotic, but as that of Satan’s agent. Beelzebub or Beelzebul was a particularly insulting term because it can mean either lord of the high place or lord of the dung. Jesus rebukes their utter stupidity: “How can Satan cast out Satan?”, he asks. Kingdoms and houses divided against themselves don’t survive. If the Adversary rises up against himself and is divided, you can be sure that he won’t stand: his end is in sight. Jesus warns them that they’re blaspheming against the very Spirit of God by crediting the Spirit’s work, done through Jesus, to the power of evil. It’s what Jesus calls in another Gospel passage the “unforgiveable sin”: the only one which Jesus can’t and won’t forgive.

Jesus‘ disciples turn out to be the heroes of the story, if you will, because they actively and obediently set themselves to the tasks of God’s reign. They involve themselves so intensely in Jesus‘ ministry that they hardly find time to eat. They sit before him, minds and hearts open, drinking in all that he has to say about God’s will and reign. Jesus responds by publicly acknowledging them : “Here is my family! Whoever does the will of God is my brother and sister and mother.” Jesus, the second Adam, through his death/resurrection/ascension/and glorification, dedicates himself to God’s will and undoes the work of the first couple’s disobedience.

As you and I actively share in that same life-giving process which we call redemption, we become, in and through our Baptism, family to Christ and to one another. The “outer nature”, our humanity, St. Paul reminds us in the Epistle (2 Corinthians 4:13-5:1), remains weak and disoriented, but now we have and are something more. We have the “inner nature” of daughters and sons of the Father who renews us, as Paul says, “day by day”. That is our hope. That’s what enables us to never “lose heart”.

Overriding all the apparent evil around us, there’s a greater presence. In and through the Risen One, God continues creation by helping us to build new relationships based on caring, commitment and love. “Paradise Lost” has been regained, and in the regaining something even better comes to be. Because of that, we offer our “thanksgiving, [which is another word for Eucharist] to the glory of the Lord.”