Mystic of the Blessed Heart 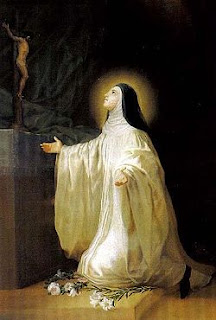 In the magnificent two-volume collection, in a series on medieval religious women, Hidden Springs: Cistercian Monastic Women (Cistercian Publications, 1995, Vol. III, Book One), p. 211) Simone Roisin is quoted as saying: "The Vita Lutgardis by Thomas Cantimpré is a real hagiographic masterpiece, for it shows the story of God winning a human soul. And that soul, once possessed by him, became a source of divine providential intercession on behalf of humankind." That well sums up the life and character of St. Lutgard(is) of Aywières, commemorated today.


Lutgard, born in 1182 at Tongeren, in present-day Belgium, was an unlikely mystic. Her mother sent her off, quite unwillingly, to the nearby Benedictine monastery at Sint-Truiden, where she was accepted as an oblate. Though she remained there 12 years, she didn't much develop intellectually. She spoke only Flemish, instead of French or Latin. The monastery, not big on discipline, at that time permitted noble suitors to visit and court the women who weren't nuns. Lutgard had her sights set on a particular young knight, but in the midst of her pining for him Jesus appeared to her, showing his wounded side. "Never again," he said to her, "long for vain love: here you may see what you should think about without end, and why." Lutgard was changed forever.


This vision of Christ, choosing Lutgard as his bride forever, had a profound impact on her and, though she was only 15, she responded wholeheartedly and without reserve. Nevertheless, the courtiers continued to come seeking after her. Around 1200, when she was 18, one knight even succeeded in abducting her for a time, but Lutgard slid from her horse and fled into the woods. After a night of wandering about, she figured out where she was and reached the monastery within a few days. News of her abduction, understandably, had spread throughout the monastery and the town. Some put the worst interpretation on the event and treated her as a wayward woman. Her biographer, Thomas of Cantimpré, tells us that she'd asked God for humiliation. It seems her prayer was answered in spades!


Horrible as the experience was, Lutgard's abduction was a real teaching moment, and she underwent a sort of second conversion by setting aside her childish ways and taking the veil of a Benedictine nun at the monastery. From then on, Lutgard determined to hold nothing back in responding to the tender love of the Blessed Heart. Considering the Rule a mere minimum, for the rest of her life she was passionate in her service of Christ. So much so, that the other nuns rolled their eyes continuously at the "zealous convert", knowing that her ardor would eventually cool down! Yet she proved to be one of those rare individuals, possessed humanly of a strong, direct, outspoken and decisive personality, yet spiritually with an immense capacity for love of God and others, complete surrender to whatever God wished, and deep mystical wisdom despite her limited human intellectual capacity.


By the time Lutgard was 20 she'd been assigned to care for the sick who came to the monastery. Early on it became obvious that she had the gift of healing. So many folks with illnesses showed up that she began to complain to Jesus that they were taking up all her time so that she couldn't spend time with him. "Please take it away in exchange for something better," she begged Jesus. When he asked what she wanted, she sought a better understanding of the Psalms as an aid to more serious prayer. The Lord granted this, and even though Lutgard didn't know Latin, she still understood what was being said. But that didn't seem to be enough for the zealous young nun: "My Lord, I am only a common illiterate nun and the mysteries of the Scriptures remain hidden to me." "What else do you wish?", Christ asked. "Your heart", replied Lutgard. "I long for your heart, too", Jesus told her. "Let it be so, my Lord.", Lutgard responded, "Your love and mine -- let them be one and the same. Only then will I feel safe." Christ definitively called Lutgard to be his chosen one in this "exchange of hearts".


During the next 40 years St. Lutgard responded to that initial call over and over, and at the price of great austerity, suffering and many prayers for the salvation of all humankind in union with the Blessed Heart of love and compassion. Lutgard is a supreme example among the saints and mystics of tireless dedication and ministry to the whole Communion of Saints. As an example, Lutgard spent three periods of her life in prolonged fasting on behalf of the Church: 1216-1223 (age 34-41); 1223-1230 (age 41-48), at which time she and her biographer, Thomas of Cantimpré first met; and 1239-1246 (age 57-64). During this latter period she was completely blind!


Among her many gifts, perhaps three which stand out most in Lutgard's life are those of intercession, compassion and witness to the living Word. Simone Roisin notes: "Lutgard was gifted with an extraordinary power of intercession, through her Lord's Blessed Heart." She reached out, her own heart full of love and compassion, to people of all walks of life through healing, counseling and reassurance in order to bring them closer to God. She especially favored "dear sinners" and priests. Lutgard's compassion was equally directed towards comforting the sick whom she visited and who were at the point of death. As to her  witness to the living Word, Thomas of Cantimpré writes: "Though to the nuns of her abbey, Lutgard was a poorly educated woman, as indeed she was, I never knew anyone to speak more ardently or more truthfully about the mysteries of faith. I must confess that my own poor knowledge often prevented me from understanding her..." (Vita Lutgardis, Book II, Chapter 15)


St. Lutgard died June 16, 1246. Her funeral was held in the abbey church and she was buried on the right side of the choir, near the wall where she customarily prayed. One of the nuns, Sybil of Gagis, wrote this epitaph:

She whom this stone shades
converses still with Christ.

Hungering and thirsting after heavenly thing, she shone;
pure day, the Spouse's face, may these now be her light.

She, a mirror for living, a flower enclosed, a jewel among her sisters;
there shone in her loving-kindness, compassion, and the
glory of her way of life.
Posted by Harry Allagree at 2:32 PM