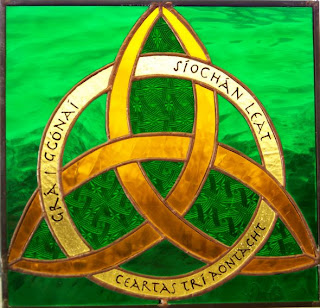 The God of Scripture is one God, the God which Isaiah, in the first reading, calls  “Holy, Holy, Holy”, whose glory and presence fills the whole earth.  But that God also chooses to relate to us through God’s “many-ness”, God’s Trinity:  God as Father is our secure, providing protecting Parent;  God as Word in Jesus, the only statement, in flesh, of the real God’s-honest-truth on which you and I can stake our very lives; and God as unseen yet Present in the deepest part of us: warming, comforting, helping, loving.
In the mystery of Pentecost, which we celebrated last Sunday, the Father and Jesus send the Spirit, whom author John Taylor calls “The Go-Between God”, to make the Holy Trinity more intelligible to us.  Taylor says: “The Holy Spirit is that power which opens eyes that are closed, hearts that are unaware and minds that shrink from too much reality.  If one is open towards God, one is open also to the beauty of the world, the truth of ideas, and the pain of disappointment and deformity.  If one is closed up against being hurt, or blind towards one’s fellow-men, one is inevitably shut off from God also.  One cannot choose to be open in one direction and closed in another.”
Some might consider that a hard saying.  But it accords with who the thrice-Holy God is. And God cannot contradict Godself.  Nor can we. For you and I would be no more successful in rejecting what God is and wants us to be than the child who would try to put the ocean in his bucket, or the holy bishop who would fully comprehend the mystery of the Holy Trinity.
“Honorable Trinity -- I do not understand at all.”
But I did have a dream shortly after my first visit with my younger stepbrother and two stepsisters.  In it my father and I met and embraced one other, communicating without words, and then walked off together.  I felt utter joy and peace.
So it must be in the community of the Trinity.
So it can be, if we let it be, in the community of our lives with one another.

Posted by Harry Allagree at 7:32 AM

Beautiful, Harry -- thank you. Will you be at JFest? I hope so.