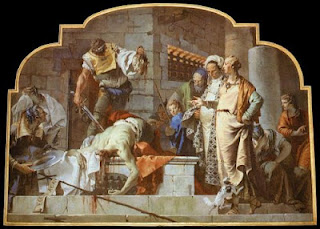 “I serve a funky little Lutheran congregation, a liturgical and sacramental emerging church. Someone recently asked, "Do you think the church you planted will, you know, get really big?"
I smiled broadly, looking up at the sky and then back at my friend. "Um," I said, "well...no." She looked at me, shocked at my seemingly low self-esteem. "There's just not a huge market for the message 'Jesus bids you come and die'," I explained. "People don't exactly line up around the block for that. But 'Jesus wants to make you rich!' seems to be doing really well right now."
It's easy enough to understand the attraction. On some level we all want to be victorious, successful and wealthy. So if someone is willing to tell me that Jesus happens to also want that for us, well, sign me up! That's good news.
Except that it isn't. It's not good news, just tempting news. Jesus knew that.
He knew how tempted people would be to hop on the Superman-miracle-worker-healer-rock-star bandwagon. This is why in Mark Jesus keeps instructing people not to tell anyone about the healings and miracles—because there is no way to know what this God/man is about based only on miracles. We only see who he is when we look upon the cross. The problem is that we'll choose the miracles every time.
This is perhaps why the Gospel writer puts the John the Baptist story here, totally out of time and place. The disciples are riding high on the power of Jesus' healings, teachings and miracles, and it is in this state that Jesus sends them out. In last week's Gospel lesson, he tells them to do their work in poverty and to expect rejection. Just in case we don't get it yet—in case we think that this thing is about our own glorification—we are now told of John the Baptist. Lest we think that this whole following-Jesus thing is about glory and not the cross, we are faced this week with the stark contrast between Herod's glory, wealth and power and John's suffering, poverty and weakness.
It just isn't about cash and prizes. It's about a suffering God who offers us life and salvation, a God who bids us come and die. Is there a line around the block yet? “

(From Blogging Toward Sunday - "Good, unpopular news",  July 06, 2009, by Nadia Bolz-Weber, a Lutheran pastor serving House for All Sinners and Saints in Denver. )
+    +    +
Herod Antipas was the son of Herod the Great and Malthace, and along with his full brother Archelaus and his half-brother Philip, was educated in Rome.  Antipas wasn’t Herod's first choice of heir; only later did Herod revise his will. During his fatal illness in 4 BC, Herod had yet another change of heart about the succession: making the elder brother Archelaus king of Judea, Idumea and Samaria, while Antipas would rule Galilee and Perea with the lesser title of tetrarch. Philip would receive what is now the Golan Heights, southern Syria, Trachonitis and Hauran.  Since the plans had to be ratified by Augustus, the three heirs travelled to Rome to make their claims. In the end, Augustus confirmed Archelaus as ethnarch rather than king, and Antipas as tetrarch.
Early in his reign, Antipas had married the daughter of King Aretas IV of Nabatea. While staying in Rome with his half-brother Herod Philip, he fell in love with his host's wife Herodias, granddaughter of Herod the Great and Mariamne I. Antipas and Herodias agreed to divorce their previous spouses in order to marry each other. Relations between Antipas and King Aretas understandably soured and in time preparations began for war.
Today’s Gospel reading (Mark 6:14-29) exposes the kind of human values which are opposed to the way of God’s reign.  It begins with Herod Antipas in a state of fear and anxiety: Jesus’ fame had begun to spread, with reports about demons being cast out and of others cured after he anointed them.  Rumors were flying that John the Baptizer had returned from the dead.  There were other speculations that Jesus was a prophet, in the style of the great Jeremiah or Ezekiel.  Herod’s paranoia kicks into overdrive as he whispers to himself, “John, whom I beheaded, has been raised.”
Verses 17-29 are a flashback to the time when John, the wildman desert preacher, had begun a ministry of preaching and baptism by the Jordan River, which marked the western edge of Antipas' territory of Perea. John had pushed the envelope too far by publicly castigating the tetrarch for his unlawful bedding down of Herodias, former wife of Herod’s brother, Philip. That was cause enough for Antipas to imprison John in Machaerus. The Jewish writer Josephus also suspects that John's public influence, and later that of Jesus, made Antipas fearful of rebellion.