Lily Of The Mohawks

Kateri (Catherine) Tekakwitha (Tagaskouïta, Tegakwitha), the daughter of a Christian Algonquin squaw and a pagan Mohawk, was born in 1656 at Ossernenon (Auriesville, N.Y.).  Her mother, who had been brought up by French settlers at Trois-Rivières, was captured c. 1653. Shortly afterwards she was chosen as wife by a Mohawk . In 1660 she, her husband and her last-born child died of smallpox. Four-year-old Catherine almost died; her face was left pock-marked and her eyes were badly affected. The sun’s brightness bothered her and she had to feel her way around as she walked. Her Iroquois name “Tekakwitha” can be translated as, "One who places things in order", “To put all into place”, or possibly "She pushes with her hands" or "Who walks groping for her way", referring to her faulty eyesight. She was taken in by her two aunts and an uncle, the first chieftain of the village and a declared enemy of the Christian faith.

In the autumn of 1666 the Mohawk villages, with all their stores, were burned down. Ossernenon was rebuilt under the name of Gandaouagué, on the other side of the Mohawk River, west of the former site. As a result of this the Mohawks begged for peace and asked for missionaries, three of whom arrived in September 1667. During their stay, Catherine took care of the Jesuits, and she was impressed by their piety and kind manners.

Attempts were made several times by her family to arrange marriage for her, but she always refused, to their great displeasure. Since two-thirds of the population of Gandaouagué were Christian Algonquins and Hurons, Catherine had undoubtedly heard much about the Ursuline Sisters of Quebec and about religious life.

In 1674, when she was 18, Jesuit Father Jacques de Lamberville came to Gandaouagué and established a chapel.  Her uncle disliked the "Blackrobe" and his strange new religion, but tolerated his presence.  Catherine vaguely remembered her mother's whispered prayers, and was fascinated by the new stories she heard about Jesus Christ and wanted to learn more about him in order to be baptized. Father de Lamberville persuaded her uncle to allow Catherine to take religious instructions.  On Easter Day, 1676, 20 year old Catherine was baptized.  With great joy, she received the name of “Kateri”, Mohawk for “Catherine”.

Kateri’s conversion and her desire to devote her life to God’s work resulted in increasing hostility from her people, even to the point where she was threatened with death. Father de Lamberville urged her to pray unremittingly and to leave the village to go to the Catholic mission, Saint François-Xavier at Sault Saint-Louis, near Montreal, some 200 miles away. In the autumn of 1677, with the aid of three Indian neophytes, she succeeded in fleeing.

At Saint-François-Xavier Mission Kateri Tekakwitha was finally able to prepare herself for a life devoted to God. Anastasie Tegonhatsiongo, who had formerly been her mother’s friend at Ossernenon, acted as her spiritual guide. Because of her exceptional qualities Kateri was allowed to take her first Communion on Christmas Day, 1677, sooner than for most converts. Then, in the spring of 1678, though she was still very young, she was received into the Confrérie de la Sainte-Famille. She taught the young and helped those in the village who were poor or sick.  Kateri spoke words of kindness to everyone she encountered.  Her favorite devotion was to fashion crosses out of sticks and place them throughout the woods.  These served as reminders to her of continual prayer.

Kateri Tekakwitha’s spiritual life was marked by extraordinary purity of body and spirit, and great charity towards all. As a Christian laywoman Kateri participated in full the life of the Indians, whether in the village or on the great winter hunts, up until two years before she died. During the latter she would create a “chapel” by carving a cross on a tree and spending time there in prayer. When she could no longer go on the hunts, she relied on the Eucharist to which she was greatly devoted. Even at the risk of suffering physical hunger, she no longer wished to be away from the church for long months. She used ascetic practices throughout her life, sometimes painful ones, though Father de Lamberville helped her keep them in moderation. On the other hand, she appreciated good jokes and knew how to laugh heartily.

One of Kateri’s dreams was to found a community of Indian nuns, but Father de Lamberville persuaded her to give up the idea. Nevertheless, on March 25, 1679, the feast of the Annunciation, she was permitted to take a private personal vow of life-long chastity. Thus, the origin of her later nickname: “Lily of the Mohawks”.

Though she’d endured health problems throughout her life, Kateri became aware at the beginning of 1680 that she was seriously ill. On the Tuesday of Holy Week she received the Last Sacraments, and died the next day, April 17, 1680, at almost 24 years of age, while uttering the names of Jesus and Mary.

After her death Father Pierre Cholonec and others observed that Kateri’s face, scarred and disfigured by smallpox, had become remarkably clear and beautiful. A strong devotion of intercession to her rose very quickly. In 1688 Bishop Jean-Baptiste de La Croix de Chevrières de Saint-Vallier, the second bishop of Quebec, called her “the Geneviève of Canada”, a theme that François-René de Chateaubriand was to develop in Les Natchez. In 1744 Father Pierre François Xavier de Charlevoix wrote that she was “universally regarded as the Protectress of Canada”. Devotion to the Venerable Kateri Tekakwitha has spread throughout the world, especially to Canada and the United States. Each year there are increasing pilgrimages to Auriesville and to Saint-François-Xavier Mission at Caughnawaga, where Kateri’s relics are preserved. 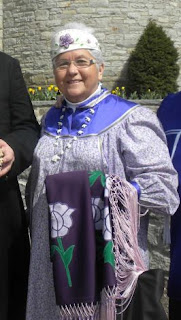 Alma Ransom, a lifelong resident of the Akwesasne Reservation
and was the elected chief of the St. Regis Mohawk Tribe.
She has helped lead the finally successful efforts to make
Kateri Tekawitha a Roman Catholic saint.
Archbishop Pedro Lopez Quintan, the Apostolic Nuncio in Canada,
will give Pope Benedict XIV a traditional Indian basket
when he canonizes Blessed Kateri on Oct. 21  (Courtesy Alma Ransom)

Posted by Harry Allagree at 4:44 PM