Mary of Magdala: The One Who Loved Much 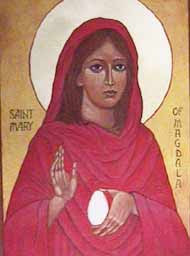 "'Woman, why are you weeping? Whom do you seek?' Mary is asked the cause of her sorrow so that her desire may increase, for as she names the one she seeks, she discovers herself burning with yet greater love for him. 'And Jesus said to her: 'Mary'. First of all, he called her 'woman', the common address at that time for one of her sex, and she did not recognize him. But now he calls her by her own name, as if to say: 'Recognize the one who recognizes you.' You will remember that the Lord had said to Moses, 'I know you by name, as if saying 'I do not know you in some general way, I know you personally.' In the same way, addressed by her own name, Mary too recognized her creator and immediately calls out 'Rabboni', that is, 'teacher'. Outwardly, it was he who was the object of her search, but inwardly it was he who was leading her to search for him."
(From a homily of St. Gregory the Great, in Celebrating the Saints, p. 249)
Posted by Harry Allagree at 1:13 PM