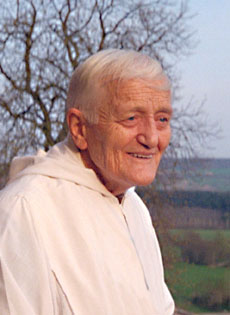 Loving God, whose blessed Son became poor that we
through his poverty might be rich:
Deliver us from an inordinate love of this world,
that we, inspired by the devotion of your servant Roger
may serve you with singleness of heart, and attain
to the riches of the age to come,
through Jesus Christ our Lord.  Amen.

One of the singular blessings and joys of my life was to have met and prayed with Brother Roger in 1992 at the first North American "Pilgrimage of Trust" in Dayton, OH, and to have met and had a wonderful conversation with Brother Alois, his successor as leader of the Taizé community.  I was also pleased to read recently in some comments by Episcopal spiritual writer, Cynthia Bourgeault, that the Taizé community has continued to be energized and carry forward the momentum of Brother Roger's ideals and ministry under Brother Alois. Taizé is, in the words of John Paul II, "that little springtime", particularly in the lives of countless young women and men throughout the world.