Setting Our Hearts On the Living Lord 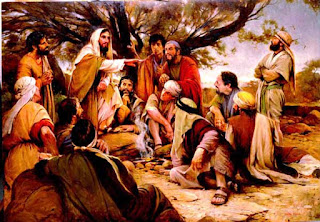 Regarding the overall message of today’s Scripture readings, Adele Stiles Resmer, who is Assistant to the bishop and Minister for Community and Mission in the Grand Canyon Synod of the Evangelical Lutheran Church in America, reminds us that your commitment, and mine, to serve God gets lived out over a lifetime. Who can count the challenges that stand in the way of such a commitment: losses, betrayals, the lure of success from wealth and position and power? She says that it’s in the reciting of our history, salvation history, that you and I are reminded of who God is and who we are in response to God. And she quotes an old saying which says, ‘If you want to hear the train, you need to be near the tracks.’ In other words, if you and I want to be faithful, we should “position [ourselves] in a place where [our] story is recited again and again” so that we can remember who we are in relationship with this God.

Fr. William Countryman, a noted CDSP theologian, writes along the same lines as Adele Resmer in his dated but still marvelous book The Mystical Way in the Fourth Gospel: Crossing Over Into God. Commenting on today’s Gospel passage, he says: “...Baptism...while necessary for the Christian life, does not guarantee the loyalty of those who receive it...even the fully initiated, those who have participated in the Eucharist, are not perfectly reliable.  Many of Jesus’ disciples leave because of his outrageous language; and among those who remain, even within the inner circle of the Twelve, is the betrayer...”

Jesus speaks again today of the wisdom of faith: that it is the setting of one’s heart and trust on the Father, through his incarnate Son who draws us, that ultimately leads you and me to eternal life.  “This is indeed the will of my Father, that all who see the Son and believe in him may have eternal life; and I will raise them up on the last day”  (John 6:40)  Jesus contrasts this with the foolishness of unbelief, expressed so directly in the opening line of Psalm 14: “Fools say in their hearts: ‘There is no God.’”

The basis for such faith comes from two sources: 1) from Jesus’ word that he is “come down from heaven” to give “eternal life” and to raise up; and 2) from Jesus’ own body and blood, now glorified and risen, which reveals the Father to us sacramentally, in the Eucharist, and spiritually through his indwelling and life-giving Spirit of love.

Today’s Gospel passage opens with the final two verses of last Sunday’s Gospel. Jesus hammers away at the fact that his flesh is real food and his blood is real drink; that in sharing his body and blood we “will live because of me”; that he himself, indeed, is the “bread that came down from heaven”, surpassing and supplanting the food from God given to the Jewish people’s ancestors.  Hearing these words, many of Jesus’ disciples exclaim: “This is tough teaching, too tough to swallow” John comments: “After this a lot of his disciples left.  They no longer wanted to be associated with him.” (John 6:60 & 66)

When Jesus asks if the Twelve also want to leave, St. Peter steps forward to speak for them.  First, he says: “Master, to whom shall we go? You have the words of eternal life...” Did you ever ask yourself to what “words of eternal life” he was referring? You and I actually have heard them many, many times.  Here is is just a sampling of them:

“You have the words of eternal life.”  You and I listen to and read these words over and over again throughout our lifetimes.  Do we actually hear what they’re saying? Do we commit ourselves to live by them each day? Do we find it difficult to “come” to the Father, to truly set our heart on God? Do we, perhaps, resist being drawn because the demands seem too great? Are Jesus’ words and sacramental presence “hard sayings” for us? Hard, yes, because of our weakness in trusting.  Hard also, because we often don’t really agree that Jesus is really present in the whole Body of Christ which includes him, each of us, and every person for whom he died, no exceptions. Could that be why we have such difficulty seeing the connection between our following of Christ and the social issues confronting our society?  If we admit that they’re related, it puts some very uncomfortable responsibilities on you and me to do justice, to feed the hungry, to welcome strangers; to struggle, as Jesus did, “against...rulers, against...authorities, against the cosmic powers of this present darkness, against the spiritual forces of evil...” (Ephesians 6:12)

The second thing which Peter says to Jesus in behalf of the other Apostles is: “...we’ve already committed ourselves, and have come to know, that you are the Holy One of God.”  The “words of eternal life” become real only when we come to the Father through Jesus in faith, when we set our hearts on him, particularly in the Eucharist, as we respond to the Father’s gift of drawing us.  This is a living encounter, and in it we echo the commitment which Joshua expresses in the first reading: “...as for me and my household, we will serve the Lord.” (Joshua 24:15)

Jesus’ once-for-all sacrifice of himself on the cross, on behalf of humankind, intended and accomplished the restoration of our relationship with the Father.  All human beings, without exception, have been saved, redeemed. Jesus meant this restoring, this one-ing with the Father, for all and for each of us personally and corporately, and left us, in the Eucharist, the pre-eminent sacramental sign confirming this.

The Eucharist is the outward sign by which Jesus draws near to you and me as particular individuals, as well as to the whole community of faith.  In the fullest sense this sign is the pledge of the Father’s, the Son’s, and the Holy Spirit’s accessibility to you and to me, the tangible assurance that God in Christ desires to relate one-on-one to you and to me, and to the whole Body of Christ through the bond of love.  The sacrament is the open, frank, and unambiguous pledge of the fact that the Father, in Jesus the Christ, wishes to share God’s life, Spirit, presence, and grace with everyone who comes forward in faith to receive Christ’s body and blood.

When, as recipients, you and I set our hearts, in solid trust, on God, through the power of ritual supplication of Christ and his Church, then the outward and visible sign of bread and wine becomes, as the Book of Common Prayer says, “...the inward and spiritual grace...the Body and Blood of Christ given to his people...” (BCP, p. 859) Just as the Apostles, in their living encounter with Jesus, we also come to know, in Jesus present, “the Holy One of God”.

To enter into relationship with the Holy One, even though we don’t fully understand all its implications, is wisdom.  To do otherwise makes one, in the words of the Psalmist, a “fool”.  Which brings us back to Fr. Countryman’s stark reminder, mentioned at the beginning: “...Baptism...while necessary for the Christian life, does not guarantee the loyalty of those who receive it...even the fully initiated, those who have participated in the Eucharist, are not perfectly reliable...”

John takes great pains, at the end of this discourse in Chapter 6 which we’ve heard over the past five Sundays, to focus in on the disciples, including Judas, in vv. 70-71 which aren’t actually part of the RCL passage today.  Note that this is the first mention of Judas in John’s Gospel, quite interesting in that 1) John uses a veiled reference by Jesus that “one of you is a devil”; and 2) John describes Judas as “he, [who] though one of the twelve, was going to betray him.”  It’s a very different portrayal from Matthew who depicts a remorseful Judas, who, though greedy, is somewhat more pitiable because he’s driven to his own suicide.  In John’s Gospel, however, Judas simply doesn’t believe. He, like the others who walked away, hasn’t set his heart in trust on the Holy One who has shown by his words and actions that he’s the source of life and salvation.

When Judas appears again in John’s Gospel it’s at Jesus final supper together with the Twelve, where several times hints are again dropped that Judas is going to betray Jesus, and during which Judas disappears out into the night.  His next encounter with Jesus is in the garden when he brings a cohort of Roman soldiers to arrest Jesus.  John describes a Judas who is so unbelieving that he doesn’t even identify Jesus to the soldiers by calling him “Rabbi” or by kissing him. Jesus is the one who actually comes out of the garden, like a good shepherd defending his flock, and asks virtually the same question which he asked the disciples at the beginning of John’s Gospel: “Whom/what are you looking for?”  In Chapter 6, John acknowledges Judas by describing what Judas is going to do, which casts cloud over his loyalty as a disciple. Later, in Chapter 18:5 John refers to “Judas, who betrayed him...”, reminding us that Judas, once a chosen participant in Jesus’ ministry, now stands in the darkness of complete unbelief.

Someone has commented that there are people who can experience God in a wildflower, while others fail to discern Christ even in the consecrated bread of the Eucharist.  The key, as Jesus has told us over these past five weeks, is in allowing the Father to draw us, in setting our hearts in trust on Jesus, and in sharing together the living bread, in whom we have eternal life and who will raise you and me up at the last day.

Posted by Harry Allagree at 8:41 AM