The Dormition of the Theotokos 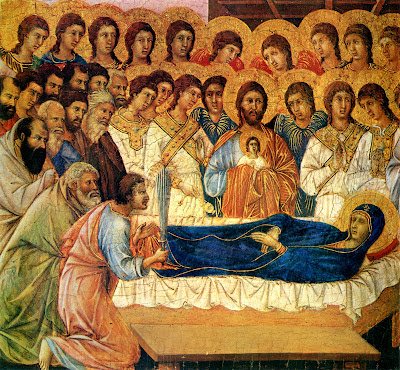 “The feast days of the saints are often referred to as their "heavenly birthdays" since they ordinarily celebrate the day when the saint died and thus passed into the new life of the Kingdom of Heaven.  No one illustrates this better than the Blessed Virgin Mary. Tradition relates that, when the time of her death drew near, all of the apostles gathered in Jerusalem to be with her: all except Thomas, who was preaching the Gospel in India and was unable to return to Jerusalem in time. The apostles gathered around her in a house on Mount Zion, near the Upper Room where they had shared the Last Supper with Jesus and had also received the Holy Spirit with Mary on Pentecost...When she died, the apostles carried her to a tomb in the garden of Gethsemane, which, tradition says, belonged to Mary's family.

Some time later, the apostles discovered that Mary's tomb was empty. This was not like the Resurrection of Jesus: Mary was not raised from the dead and did not appear to the apostles after her death; nor did an angel announce the news. Rather, her tomb was simply empty and they concluded that she had been taken directly ("assumed") into heaven, in much the same way that Scripture and Tradition attest that the greatest saints of the Old Testament, Enoch, Moses, and Elijah, were taken up bodily. In time, Thomas returned from India and the apostles told him what had happened, together with their conviction that Mary had been assumed into heaven. According to this tradition, Thomas once again played the role of the doubter and insisted that he would have to see the evidence before he would believe. At this point, we may perhaps be forgiven for thinking that the tradition is a bit unfair to Thomas. It hardly seems possible that this apostle who had traveled far and risked much to share his faith would make the same mistake twice. Nevertheless, the tradition has him going to the tomb of Mary where, instead of her body, he found the tomb full of fragrant flowers. One version of the tradition says the flowers were roses and lilies. Then, looking up, he saw Mary herself, going up to heaven. Looking back, she saw Thomas and dropped the girdle which had tied her robe and an angel delivered it into the hands of Thomas.

It was not until 1950 that the Assumption of Mary was defined as a dogma of the Roman Catholic Church, when Pope Pius XII proclaimed that "the ever-virgin Mary, having completed the course of her earthly life, was assumed body and soul into heaven." In reality, however, this dogma was nothing new. It simply made it a matter of obligation for Roman Catholics to believe what many Christians have always believed, namely, that God had "taken to himself", for eternity, the blessed woman who had borne his incarnate Son in time. All believers look forward to "the resurrection of the body and the life of the world to come." At the Council of Chalcedon in 451, the emperor asked the patriarch of Jerusalem to bring the relics of Mary to Constantinople so that they could be enshrined at what was then the center of the world. The patriarch replied that there were no relics because, as he said, the apostles had found that her tomb was empty and her body had been assumed into heaven: she had already gone where we all hope to go.

Some Christians have difficulty with this idea because it is not in the Bible, though, as already noted, the Bible does tell of others who have been assumed, body and soul, into heaven. Nevertheless, Mary's role in our salvation, and her particular relationship with God is a pivotal one on our behalf. Her "yes" to the Archangel Gabriel opened the way for God to take on our humanity, to become fully one with us in the flesh. As an ancient prayer says, God humbled himself to share our humanity in order that we might share in his divinity. In the moment that Mary said "yes" to God's plan, she was already one with God in a unique way, bearing within her body God himself. A connection such as this transcends by far the intimacy of human relationships. Indeed, it reaches beyond death: so the Church believes.

At the Council of Ephesus in 431, Mary was given the title Theotokos: God-bearer or Mother of God. Nestorius taught that the divinity and humanity of Jesus were distinct and never mingled, so that Mary was "Christotokos", the mother of the man Jesus, but not the mother of God incarnate. The teaching of Nestorius was rejected by the Council and Mary has been known ever since as Theotokos, in token of the fact that she carried God himself in her womb, and continued ever after to share a special union with him, both in life and in death. In the West, Mary's feast on August 15th is called the Assumption. In the East it is called Koimesis: "Dormition" or "Falling Asleep". Both titles are somewhat vague about the details. Indeed, despite the tradition concerning Thomas's vision of Mary’s ascent into heaven, the Church is officially silent on the way in which she got there. What is clear is that, as the Collect for this feast says, God took Mary to himself, to be with him and to be one with him for ever. That is what we celebrate on today.

Taking its cue from the experience of Thomas at the tomb of Mary, the celebration of this feast includes the blessing of fragrant flowers and herbs. Flowers have always been associated with Mary in a particular way. She is the Mystical Rose and many flowers are named for her or have popular names that relate to her. August is the wrong time to plant any kind of garden, but Marymas would be a good day to begin planning and marking out a Mary Garden. Some plants and seeds and bulbs do best if planted in the fall, and others can be added in the spring.

From ancient times, in every culture, herbs and various flowers have been known to have healing properties. The blessing of herbs and flowers on Marymas is a way of "baptizing" the wisdom of traditional healing and combining it with the Christian wisdom that recognizes that God is the true source of healing and that salvation (wholeness) is ultimately found only in the Son of Mary, Jesus Christ. Thus, it was customary for the faithful to bring bunches of herbs and wild flowers to church on this day. They were blessed at the beginning of the Eucharist and then taken home to be used for healing and protection through the coming year. In many parishes and especially at shrines, this is a day for processions and for celebrations that continue after the liturgical observances have been completed. Traditionally, working people had a holiday from work, so that there were also family celebrations.

An especially good, yet relatively simple way to celebrate this feast is to have a tea party (but certainly not in any political sense!). A festive table might “Sweet Mary”. For food at the tea party we suggest nasturtium sandwiches and strawberry shortcake. The strawberry was known as the "Fruitful Virgin" because it blooms and bears fruit at the same time. Another lovely European tradition says that the strawberry is sacred to Mary who accompanies children to keep them safe when they go strawberry picking on St. John's Day. The nasturtium is known as "St. Joseph's Flower." It is an edible flower and can be combined with cream cheese to make tea sandwiches. Tea should be accompanied by prayers appropriate to the occasion, such as the Collect of the Day which concludes this article. Children should be told the story of Mary's heavenly birthday. How else will they learn about it? Finally, everyone can enjoy a walk in the garden which could easily be made into a game, with an award, such as a Mary-blue ribbon, for the person who identifies the most flowers and herbs that are named for Mary." (Excerpted and adapted from the web site Full Homely Divinity)

O God, you have taken to yourself the blessed Virgin Mary, mother of your incarnate Son: Grant that we, who have been redeemed by his blood, may share with her the glory of your eternal kingdom; through Jesus Christ our Lord, who lives and reigns with you, in the unity of the Holy Spirit, one God, now and for ever. Amen.
(Collect for St. Mary the Virgin, Book of Common Prayer, p. 243)