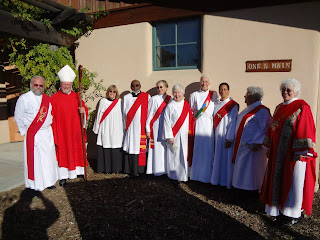 Recently I was asked to facilitate a small regional group on spiritual formation
this semester for four students of the School of Deacons, Berkeley, CA.
The following are some thoughts in this regard.
+     +     +

In the passage from the prophet Jeremiah, God reminds us all: “Before I formed you in the womb I knew you; before you were born I set you apart; I appointed you...” I’m willing to bet that many times along the way each of us has pointed out to God, à la Jeremiah, probably that not only we were “a youth”, but that we were only a lowly, humble lay person, and why would God want me in the ordained ministry anyway. Undoubtedly, God has assured each of us over and over, as he did Jeremiah, “I have known you; I have set you apart; I am with you to deliver you...”, just as Paul assured the Corinthian community that it’s “through God’s mercy [that] we have this ministry...”  In the ordination service for a deacon, the merciful, protective God, through the Bishop’s laying on of hands, reaches out, as in our creation and in our Baptism, touching us again, assuring us that we’re commissioned anew to be God’s mouthpiece in a dangerous, unaccepting and resistant world.

The Scriptures above amount to a veritable manual or handbook of what any baptized Christian, much less one newly ordained, needs in order to like in faith, hope and love in this 21st century culture of anxiety and flux. Let me enumerate some of the things which can help us maintain our spiritual balance and sanity:

Though all of these characterize the call by God in Baptism, as well as the call to the oldest ordained sacred order, the last item mentioned above is key. One’s ministry as one who serves, as a deacon, even though for some it will be called “transitional”, will always be central to one’s Christian life and to the life of one ordained. Diakonia is essential in the thinking of both Jesus and the Apostles, as well as of the early Church Fathers and Mothers. The great martyr Ignatius of Antioch envisions the Bishop as representing the unity of one God for all people, and the presbyters as representing the council of the Apostles. In his Letter to the Trallians, Ignatius says: “Everyone must show the deacons respect. They represent Jesus Christ...” And, Ignatius adds, “You cannot have a church without [all of] these.”

As an icon of Jesus the Christ the deacon is called to proclaim with Paul, in word and by example, that “...we do not preach ourselves, but Jesus Christ as Lord, and ourselves as your servants for Jesus’ sake...” Luke’s Gospel passage reminds us of the absolute necessity for those who follow Jesus to be servant leaders. Jesus’ discussion with his disciples about this is occasioned by Jesus‘ revelation that he’s been betrayed by one of his own. Two all-too-human temptations frequently plague people who’ve been “chosen”: 1) unfaithfulness and betrayal; 2) the struggle to be first, to be esteemed, to be known. At table with Jesus, the Apostles, shown over and over again in Luke’s and the other Evangelists‘ accounts to be so typically human, become contentious (the Greek word has the sense of loving strife, keeping the pot stirred) over who seems to be the greater, until Jesus redirects their focus. The secular/pagan leaders and lords, he says, show off and flex their power over others and ingratiate themselves as “do-gooders”, when it suits their purposes, in order to maintain status and authority.

“But you are not thus”, Jesus says. “No. Greatness must serve lowliness.” The greater among you must live and act as the newest to the group, the least important, he says. The one who leads must live and act as the one who serves, as a diakonos. “I am among you as the one who serves”, Jesus says: not just “as one” who serves, but “as the one” who serves: “the master”, in the words of Fr. Joseph Fitzmayer, “who puts on an apron and serves the faithful.” In these words, Jesus sums up his whole life and ministry, as well as the task of one called to be a deacon.

How one is to faithfully serve God’s people hasn’t been an issue only for Jesus‘ disciples, but for the Church in every age. Commenting on Luke’s passage, Fr. Gerard Sloyan, an old professor of mine from Catholic University days back in the 1960’s, observes: “No church is exempt or above the fray of disagreements and disputes; indeed, we might even be encouraged by knowing that this is constitutive of church life. The tough vocation of Christian life in community, however, is sitting at the table of discussion and at the table of the Lord’s Supper and facing those with whom we have serious disagreements, so that -- if not always agreement -- charity and love prevail.”

How utterly apropos of all that one takes on as a deacon. As a bearer of God’s Word in a world, and too often a Church, that doesn’t always want to hear that Word, threatened because of the security they’ve built for themselves, the deacon will probably not be popular, regardless of what s/he says. Rejection in some form is inevitable. The deacon’s call to be uncompromising in opposing injustice, violence, idolatry, and false teaching in any form, will at times make her/him afraid; overwhelmed and uncertain; blasted and stung by others’ criticism; saddened and humiliated when some of one’s own turn away, perhaps even betray, as happened to Jesus. In those times the words of Jeremiah’s God will be a comfort: “Do not be afraid of them, for I am with you to deliver you, says the Lord.” The deacon’s call is God’s work. It is God’s power which make the deacon’s hesitant words efficacious, perhaps at times even prophetic. The deacon is but a touchstone communicating to anyone who will listen that the loving God is the One in charge of our lives and history.

Take it as wisdom, or if not that, at least good advice, from an elder that the surest way a deacon can be a faithful servant is by living in deep and close relationship with One whose image s/he is. Psalm 84 alludes to God’s “dwelling place”, i.e., God’s very Presence, in describing the Temple where mother sparrows and swallows find a secure place to nest their young, and where “those whose strength is in [God]”, viz., the priests and Levites, and the people, find a home base from which to go and come on their pilgrimage of servant ministry. It’s important for a deacon not to let a day go by without spending significant time in that “dwelling place” of the “living God”: in prayer and contemplation, in the daily Office, and in the Eucharist. Nothing which the deacon will say or do in servant ministry will mean anything unless it comes from that Source. Without it, the deacon will only be a blind guide leading the blind.

In 2004 my son, Andrew, told me of an experience he had on a visit to the Tuileries Garden, near the Louvre, just before he left Paris. There’s a large fountain there where miniature boats, with poles to guide them, can be rented. Though Andrew knew only a smattering of Italian, he was following the dialogue between and Italian man and his small son. The boy had obviously never done this before, and was therefore somewhat perplexed as to the mechanics involved. His father patiently showed him how to use the pole and to guide the “ship”, to push it ahead in the water, then turned it over to his son. The boy looked up and asked, “But how will it keep floating around?” And the father answered, “God will take care of that. Andiamo, Capitano! (Let’s go, Captain!)”

The late Bishop Stewart Zabriskie published a profoundly thought-provoking book in 1995, entitled Total Ministry: Reclaiming the Ministry of All God’s People. In it he tells of a picture of a ship in his office bearing this inscription: “A ship is safe in a harbor, but that’s not what a ship is for.” The ship of the Church, if it’s to survive and prosper, must always be heading out for the high seas. Each of us “on board” , in the unique way God has called us, has a part in tending to and navigating the Church through the calm weather and peaceful waters, as well as through the threatening storms and squalls. God brings to fruition the gift given to a person, begun in the womb and in Baptism, in their call and ordination as a deacon. God invites that person to be a servant leader in the Church, bearing the “pole”, if you will, of God’s Word, compassion and love as she or he ministers to and helps guide all those committed to their, especially “the poor, the weak, the sick, and the lonely.” (Book of Common Prayer, The Ordination of a Deacon, The Examination, p. 543) God bids that person:

Posted by Harry Allagree at 7:44 PM

I have always maintained that there are only two offices springing from apostolic origins: the episcopacy and the diaconate. The Church could get along without priests (as it did for many years) , but it would have to have bishops and deacons to be strictly true to "apostolic succession"!