Being Rich Towards God 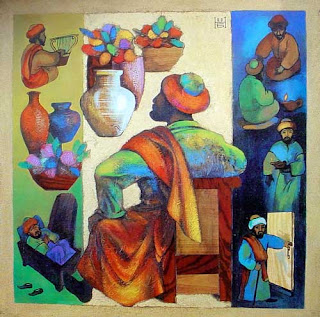 Here is a story which I gleaned from the blog site of Fr. Rick McCracken-Bennett, rector of All Saints Episcopal Church in New Albany, OH:
“There is an old story about two brothers who inherited the family farm. They also inherited the core value that, within the family, everyone must be treated with absolute equality. One brother was single and the other was married with three children. As the story goes, there were two houses on the farm, so each brother got one. There were two large barns and two smaller barns and each brother got one of each. The animals were divided equally and when there was an odd number they had a cookout in which they, of course, equally shared down to the last bratwurst. The land was divided equally as well, acre by acre, pasture by pasture.
Now some thought these brothers were taking this fairness thing to extremes because every evening they would make certain that the animals were back to whichever brother they belonged and any grain left over was divided into sacks and taken to each one’s granary.

Absolutely everything was divided equally, just as their father had wanted it. This worked just fine until one day when the younger brother began to think about this arrangement. “This is not fair…not fair at all. We must change this arrangement. Why, my brother has a wife and three children while I am single. He has more mouths to feed than I. Ah! I know what I will do.” And that evening, under the cover of darkness, the younger brother took a sack of grain from his own granary and  took it to his brother’s granary and left it there. He continued to do this every night thereafter.
That same day the older brother thought to himself, “This is not fair…not fair at all. We must change this arrangement. Why, my brother is single, while I have a wife and three children. They will take care of me when I am old and can no longer work on the farm, while my brother will have no one to care for him. Ah! I know what I will do.” And that evening, under the cover of darkness, the older brother took a sack of grain from his granary and took it to his brother’s. He continued to do this night after night.
One very, very dark night, as the story goes, when each of them was moving grain from their granary to the other’s they smacked into each other. When they recovered and realized what the other had been doing, they embraced in a brotherly embrace and, I’m told, they continued their practice until the day when they were too old to carry the sacks of grain anymore. And to this day, their children and their children’s children, and even their children carry sacks of grain each day to help them remember and honor the unselfishness of their ancestors.”
Such people, says the Gospel, realize that “one’s life does not consist in the abundance of possessions”, outwardly or inwardly. They know how to be “rich toward God.” The Scriptures from Hosea the prophet (11:1-11) and from the Epistle to the Colossians (3:1-11), along with St. Luke’s account (12:13-21), teach us how that is possible for us.
Hosea offers a picture of the Lord God as a loving, nurturing parent, agonizing over the punishment of wayward, wandering children: a parent who is as pained as a child to whom discipline is given. Hosea, having two sons and a daughter of his own, could relate to this, and could thus describe God as a parent lifting an infant to the cheek, helping a toddler walk, picking up and embracing a child. "I led them with cords of human kindness, with bands of love." Hosea describes the risks of raising children, even the possibility of rebellion. Though God's children turn away to idols, God reacts with tender compassion, rather than anger. At the end of the passage, Hosea envisions a homecoming: “They shall go after the Lord…[God's] children shall come trembling like birds...and I will return them to their homes…” God’s people become “rich toward God” by witnessing God’s uninhibited compassion and mercy at work in their lives.
The result is that God’s people grow from selfish narcissism and spiritual infancy, to toddlerhood, to adolescent arrogance and open rebellion, while God as parent, all the while, remains steady in lovingkindness, until the wayward ones grow weary, their souls faint within them, their inner thirst and hunger for true life drawing them back to the source of living waters. They become “rich toward God”.
The Epistle to the Colossians was possibly written by a disciple of Paul who borrowed his name, a frequent practice in the first centuries. Epaphras, not Paul, had founded the church at Colossae, and Paul never actually visited there. Nevertheless, Paul felt a deep connection to the community. In this passage he responds to reports of divisions within the church. Some of the members felt that they could “supplement” their faith in Christ, particularly by engaging in various ascetic practices, which might aid them through ecstatic visions or mystical experiences to participate more directly in the worship of God. Paul cautions the Colossians: “Do not let anyone disqualify you, insisting on self-abasement and worship of angels, dwelling on visions, puffed up without cause by a human way of thinking, and not holding fast to the head, from whom the whole body...grows with a growth that is from God…” He questions unorthodox “human commands and teachings.” “These”, he says, “have indeed an appearance of wisdom in promoting self-imposed piety, humility, and severe treatment of the body, but they are of no value in checking self-indulgence.”

Paul then exhorts them, much like parent would a young adult who’s about to leave home, perhaps to enter college, or go to a new geographical location, or be married or to take employment away from one’s birthplace. Many of us have been on the receiving and giving end of such “loving warnings”: ”Remember who you are, be careful, take care of yourself. Make sure you wear clean underwear in case you’re in an accident.” In a similar way, the author of Colossians firmly exhorts his hearers: “Seek the things...Set your minds on things that are above, not on things that are on earth...your life is hidden with Christ in God...you also will be revealed with him in glory...Put to death...fornication, impurity, passion, evil desire, and greed (which is idolatry)...get rid of...anger, wrath, malice, slander, and abusive language from your mouth...Do not lie to one another...you have stripped off the old self...and have clothed yourselves with the new self...In that renewal...Christ is all and in all!” These are words which you and I, and anyone who claims to follow Jesus need to hear, even those whose conversion may have been long in the past. In the verses following today’s passage there is a refreshing restatement of who we are, as Christian women and men, and as fellow parish members, and of how we might learn to be truly “rich toward God”. Paul says: "As God’s chosen ones, holy and beloved, clothe yourselves with compassion, kindness, humility, meekness, and patience. Bear with one another and, if anyone has a complaint against another, forgive each other; just as the Lord has forgiven you, so you also must forgive. Above all clothe yourselves with love, which binds everything together in perfect harmony. And let the peace of Christ rule in your hearts, to which indeed you were called in the one body..."
Finally, in Luke’s Gospel passage, Jesus himself shows us how to be be “rich toward God”:
1) “Friend, who set me to be a judge or arbitrator over you?” If Jesus, to whom God gave authority to judge, refuses to condemn the greedy brother of the man who approached him, what makes you and I think that we can condemn others, and even do so in Jesus’ name?
2) “Take care! Be on your guard against all kinds of greed; for one’s life does not consist in the abundance of possessions.” There was a  motto back in the 1980s which declared "Greed is good". Obviously, Jesus doesn’t “buy” that.  Sara Dylan Breuer says that Luke “makes clear that Jesus' way privileges reconciliation over merely being right. And that's a very liberating way to live. When we're dead set on accumulation, whether it's some kind of moral points we think we're gathering or wealth to shield us from misfortune and suffering, we end up trapped in anxiety. Behind insisting that we're right, others are wrong, and God will vindicate those who are truly good, there's usually an anxiety that others are getting ahead of us. Behind our efforts to accumulate enough to handle any illness or disaster that comes our way, to live in a ‘good neighborhood’ where bad things supposedly don't happen, and to experience enough luxury to distract us from insecurity and fear, there's usually an awareness that we're kidding ourselves, that life involves vulnerability…”

Instead of cataloguing our personal, or family, or parish, worries and potential disasters, and calculating how much we need to shield ourselves from them, wouldn’t it be much more constructive -- and comforting -- for you and me to bring our mistrust, our anxiety, our fear, to God, and to treat the world, the Church, our parish or our family as places gifted to us by God in which we can witness and participate in God's indiscriminate compassion and mercy, places in which you and I can become truly “rich toward God”?

Posted by Harry Allagree at 9:03 AM

Honestly, yo;u preach the LOVELIEST sermons—that's the only word that does it—your sermons are love-ly.