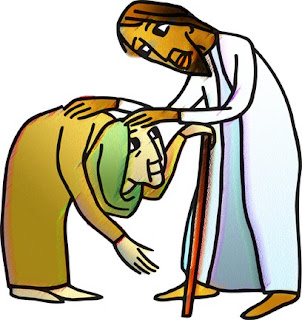 “We are determined to be free in ’63!” Those words were spoken by Rev. Martin Luther King, Jr. 50 years ago at the March on Washington. What more fitting time can there be, than the current celebration of this historic event and of King’s memorable speech, to reflect on the gift of freedom.

The simple message of Luke’s Gospel passage (13:10-17) is that God’s purpose is always to see us free. Luke’s story unfolds as Jesus is teaching in “one of the synagogues”. We’re not told where it is. A woman is there who’d been crippled for 18 years, so that she was bent over and unable to stand up straight. This isn’t a rare thing even in our own day. One of my priest friends has scoliosis severe enough that he has to stand back in the supermarket aisle in order to see the top shelf.

The woman, apparently, has come as a worshipper, perhaps a regular one. She’s undoubtedly sitting with other women in their section. In Orthodox Judaism, a mechitzah, i.e., a wall or curtain, separates the women from the men, sometimes placing women in a second floor balcony. A Jewish commentary explains the rationale thus: 1) mingling of the sexes can lead to frivolity. One’s mind is supposed to be on prayer, not on the pretty girl praying near you; and 2) even if the sexes are separated, they shouldn’t be able to interact much during a religious service, lest this lead to gazing and impure thoughts. Many pagan religious ceremonies in ancient Jewish times involved sexual activity and orgies. The separation was seen to prevent, or at least to discourage, this. Interestingly, although men shouldn’t be able to see women during prayer, women are permitted to see men during prayer. It may be that women are judged as better able to concentrate on prayer with an attractive member of the opposite sex visible, than vice versa! Because of these restrictions, the mechitzah is usually opaque, at least from the men's side. Some mechitzot divide the front and back of the synagogue; others divide the left and right sides of the synagogue, thus enabling the women to not be farther away from the service than the men.

Notice that the woman in the Gospel, keeping a low profile, isn’t the one who asks for healing. Jesus notices her and simply announces: “Woman, you’re set free from your ailment.” Disregarding Jewish custom, he walks over to her and lays hands on her. Luke says the woman stood up right away and began praising God: out of habit, one could assume.

As in many congregations, regardless of denomination, there’s always one self-righteous person who feels compelled to enforce the liturgical “rules” by the book! In this case, Luke says, it’s the leader of the synagogue. We can imagine him, with his prissy, indignant face, jumping up and announcing loudly: “People... there are six other days when work is supposed to be done! Please come only on those days, not on the Sabbath!” He’s a perfect example of one who’s made the Law and the Sabbath an idol.

Jesus is quick to challenge him and any others in the congregation who share such views: “You hypocrites!” Jesus draws a vivid contrast between their willingness, on the Sabbath, to rescue a thirsty ox or donkey, leading it to water, and their  hardened resistance to his acting on the Sabbath in behalf of a woman “whom the Adversary had bound for eighteen long years” by her physical ailment: she, who was “a daughter of Abraham”.  Luke notes that Jesus’ opponents were publicly shamed, and that the others, “the entire crowd was rejoicing at all the wonderful things that he was doing.”

Jesus is about freedom, about unbinding people from what holds them back, about releasing them: from physical ailments, from interior anxiety and sickness, from the confining limits of false religiosity. This is the object of God’s ministry to us and among us, and God calls you and me to that same ministry of freeing others to do the work to which God calls them.

The basis for this is what the author of the Letter to the Hebrews speaks about in the second reading (12:18-29). The gracious God has called us in Baptism as citizens “of the living God”, to “the heavenly Jerusalem”, to a “festal gathering” which is “the assembly of the firstborn...to the spirits of the righteous made perfect...and to Jesus, the mediator of a new covenant, and to the sprinkled blood” which he shed in order for us to be unbound, released, truly free. His blood, shed for us, is the unique sign of the communication of life between God and us. We’re sisters and brothers in Christ in God’s family, and, as such, are called to “offer to God an acceptable worship with reverence and awe”. Worship doesn’t happen just at church on Sunday: it happens all week long in the way we relate to and reverence one another, in the ways we carry out our ministries so that everyone with whom we associate can be free from whatever would bind or control or limit them from doing what they’re called to do. The author of Hebrews warns us: “See that you do not refuse the One who is speaking.” We refuse the One who speaks to us any time we cause another to be less free for doing the will of God.

In 1997, Guidepost magazine told the story of a woman from Chappaqua, NY, named Elizabeth Sherold. Elizabeth was working at her computer one afternoon when all of a sudden she saw a skunk stumble across her front yard wearing a yellow helmet, at least it looked like a helmet! It actually turned out to be a yellow plastic yogurt container which was stuck on the skunk’s head. The skunk ran around frantically trying to get it loose, but the container wouldn’t come off. So the skunk continued blindly running this way and that, unable to see. Elizabeth called the Department of Wildlife and asked what she should do, and was politely told that she needed to pull the yogurt container off the skunk’s head! “What if it sprays me?” she countered. “Well, if a skunk can’t see you, he won’t spray you”, said the official.  “Yeah, but what happens”, Elizabeth asked, “when I pull the container off?” “Make sure he doesn’t feel threatened!”, came the answer.
She thanked the official somewhat unconvinced, hung up and went outside. The skunk was nowhere to be found. As she was about to turn and go back inside, all of a sudden a black and white streak suddenly emerged from the bushes and ran straight toward her.  Throwing caution to the wind, she stooped down, quickly grabbed hold of the container, and pulled it off the skunk’s head. Suddenly Elizabeth found herself staring into two alert black eyes a mere two feet away.  But it was free, no longer limited, released! She held the skunk’s gaze for a full 10 seconds before it turned, ran a few yards, then continued on, disappearing down a culvert.
Here’s what Elizabeth Sherold wrote later about that encounter:  “A timeless parable played itself out, I thought.  For this skunk was all those needs that I hesitate to get involved in.  You know, involvement takes time.  And I have deadlines to meet.  I probably can’t do anything anyway.  And somebody else with more expertise can probably handle it better.  And besides, involvement can be ugly, and the stench may rub off on me.  And all of those things, of course, may be true, but I’ve got a yellow pencil holder on my desk—a rather scratched and battered one—to remind me that every now and then God’s answer to a need is me.”
Without pressing the comparison of a skunk to anyone in your life or mine (!),  “every now and then God’s answer to a need”, to helping someone else get, at least metaphorically, “straightened up”, loosened from their burden, made free again, is you and me!

Posted by Harry Allagree at 8:02 PM