"Touch Me and See" 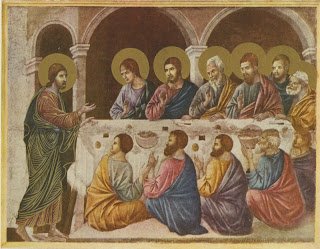 "God, whose blessed Son made himself known
to his disciples in the breaking of bread:
Open the eyes of our faith, that we may behold
him in all his redeeming work..."
(Collect for 3rd Sunday of Easter)
In all the Gospel readings of the liturgy for the past three weeks, there's been a flurry of "appearances".  Whoever is responsible for assigning which passage is to be read on which Sunday has seemingly jumped around through the four Gospel accounts since Easter (including the days of Easter week), as if discovering "Oh, here's one! And there's another one!", etc.  The breakdown of which readings are used is somewhat interesting.  John and Luke lead with four citings each, although only two are the same passage for John. Luke is the clear leader with four citings and three repeats.  Matthew and Mark lag far behind with only one citing each, and, in Mark's case, two appearances within the same passage are only referred to.  The passage repeated three times in Luke is today's Gospel, 24:36b-48.  Now, I wouldn't be able to say exactly what was the motivation of the chooser of these passages, and why he/she emphasized this one of Luke's, but usually repetition implies the presence of a significant message which one wants others to hear.  Up to this time the liturgy's emphasis has been on the stupendous blessing and reality of  Jesus' resurrection for us.  From this point on in the Easter season, it seems that there's more emphasis in how the Risen Lord is calling each of us to live out the Paschal mystery in our own lives.
Luke's passage begins with "the disciples telling how they had seen Jesus risen from the dead." (RCL translation)   In the context of Luke's Gospel, this refers to the Emmaus event (24:13-35) in which Cleopas and another unknown disicple or apostle had seen Jesus who had "been made known to them in the breaking of the bread."  The image I have in my mind is of these guys standing there, very self-satisfied, crowing with one-upsmanship to their colleagues about how they'd seen the Lord.  Then, Luke notes, Jesus was there with them.  The Greek uses a prolonged form of the primary word for "stand", with the flavor of "abiding", "continuing", "standing still", even "covenanting". Jesus is apparently suddenly, quietly, but very visibly there, because Luke observes that "they were startled and terrified, and thought that they were seeing a ghost."  It's one thing for us to hear and read about Jesus, to learn about him, to theologically appreciate the finer points of the Resurrection events, even to prayerfully meditate on these things.  But it's a whole different thing when we have one of those rare moments, which we can never see coming, in which Jesus is really there: before us, within us, encompassing us, and we're somehow very conscious in that moment that our own supposed intelligence, spiritual aptitude, and  self-righteousness has had nothing to do in bringing it about. We feel an inexplicable vulnerability and find ourselves wholly exposed, with nowhere to hide.  Like the disciples, we may be a bit startled, even terrified. because we realize that when Jesus is present, expectations will inevitably be made on us.
Jesus immediately picks up on these feelings in the disciples: "Why are you frightened, and why do doubts arise in your hearts?"  Then he does something unexpected: in order to verify for them that it's really him, that he's not a ghost, he invites them to look at his hands and feet (and presumably, his side also), and even further, to "touch me and see". Talk about putting oneself right out there! It's a situation where most human beings, whether you're the one looked at or the one looking, would feel extremely uncomfortable.  The lookers would probably find it repugnant to go poking around in someone else's wounds, while the one exposing his/her wounds to another would have to possess an immense amount of trust, not to mention humility, self-confidence, and even love for the other(s).  And yet that's what Jesus does.
I've always loved the way Luke describes the disciples' response:  "...in their joy they were disbelieving and still wondering..."   Because of that Jesus tries to reassure them still further.  "What do you have to eat here?", he asks.  The best they can come up with is "a piece of broiled fish".  No lemon, vinegar, or tartar sauce; no chips or cole slaw, it seems! At least it was probably fresh, since most of them were fishermen by trade.  But Jesus is never picky.  He happily and readily accepts whatever we offer, little or big, fancy or plain: "...he took it and ate in their presence..."
If we're to take anything to heart from all this, perhaps it could be to prepare ourselves better for the "appearance" of the divine in our life; to be more open to accepting Jesus' invitation to "touch me and see", not only in those deep moments of awareness of his own presence, but equally in "his hands and feet": in especially the neediest of our sisters and brothers; to allows ourselves to be more vulnerable in exposing our outward and inner wounds to trusted others who can and are willing to help us; to know that the best place for encountering the Risen Christ is always at table with others, symbolically or really: in the Eucharist or in occasions of sharing food and drink together; and, as Jesus, to overcome our pickiness with regard to the persons who appear in our lives as his "hands and feet", or as to what expectations the Lord might have of us in our ministering to one another.  In other words, we ask to have such vision of faith -- sometimes "disbelieving and still wondering" in our joy, but never unbelieving -- that we can recognize Jesus "in all his redeeming work".
Posted by Harry Allagree at 10:29 AM