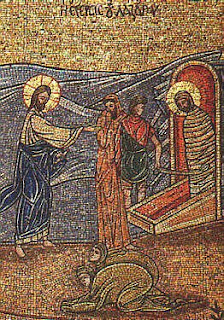 "Having fulfilled the Forty Days...we ask to see the Holy Week of Thy passion."  (Orthodox Vespers of Palm Friday)
I love the Orthodox Church's liturgical practice of beginning the great Holy Week with Lazarus Saturday.  There's a vestige of it in the Evening Prayer of the Episcopal Church: in the Gospel reading (John 11:28-44), the raising of Lazarus of Bethany.  According to the Orthodox liturgy, Lazarus Saturday and Palm Sunday are the "beginning of the Cross".
Lazarus Saturday is, for the Orthodox, really a Resurrection service on Saturday, for Jesus' raising of Lazarus confirms the truth of general resurrection.  Light and joy permeate both Lazarus Saturday and Palm Sunday, while also leading us into the darkness of the Cross throughout the rest of the week, finally culminating in the same shining light and joy at the end of Holy Week as darkness itself is illuminated and the victorious Risen Christ shines forth embodying ultimate Life, Light, and Joy.
The central theme of these days is the forthcoming victory of Christ over Hades/Death: the universal darkness and destruction which has invaded and poisoned humankind.  With Lazarus' resurrection, "death begins to tremble". It is in essence the "announcement of the Pascha", the definitive passover or passage from death to eternal life in Christ.
Lazarus, the friend of Jesus, is an icon and symbol of all humankind.  God created human beings as God's friends, called to know God, to commune with God, to share God's own life.  Yet Death has thrown humanity into selfishness, sorrow, suffering, and discord.  In the Gospel story of Lazarus' raising, some earthy language is used when Jesus asks for the stone to be rolled back.  Because the body of Lazarus has been in the tomb for four days, his sister, Mary, remarks that "already there is a stench".  I rather like the descriptiveness of the King James version better: "by this time he stinketh".  Indeed, the whole human situation "stinks".  God called humankind to life, but here at the grave Jesus encounters Death, anti-life personified, which has now permeated human life.  And "Jesus wept", John tells us.  Jesus grieves as, in his humanity, he realizes what tragedy has overtaken the lives of his sisters and brothers.  But in Jesus' weeping, in giving vent to his extreme love for his friend, Lazarus, and for us as symbolized in Lazarus, Jesus realizes that he has the power of calling humankind back to life, because it is the power of love, love as power.  In Jesus' tears God who is Love is already recreating, restoring, renewing humankind's life of darkness and despair.  Confidently, commandingly, Jesus cries: "Lazarus, come out!"  And so Lazarus Saturday is the beginning of both the Cross, the supreme act of self-giving love for God's friends, and the Resurrection, the ultimate triumph of life and love over death. "Unbind him, and let him go."
"Amen" to that!
(Mosaic of the Raising of Lazarus from
Transfiguration Church, Lowell, MASS.)
Posted by Harry Allagree at 8:15 PM